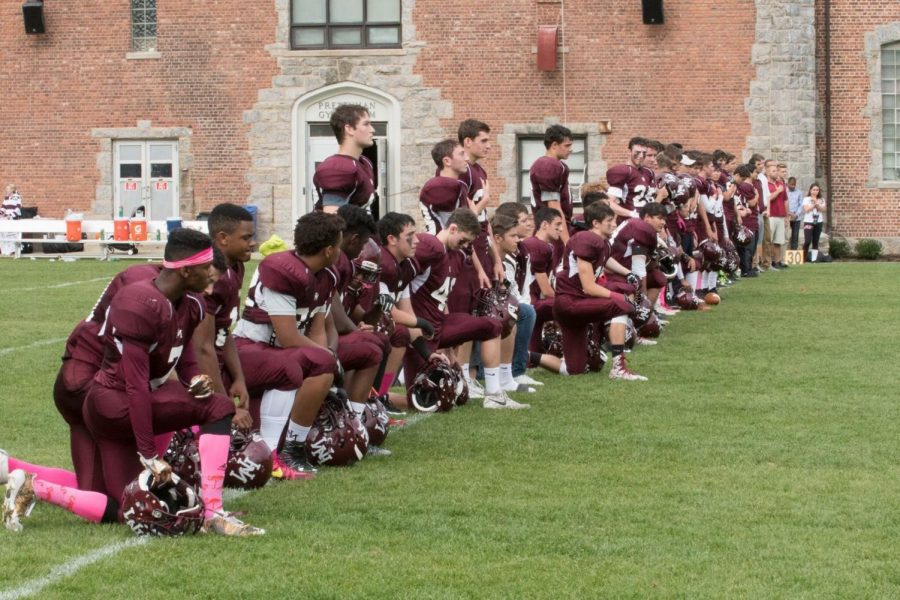 As the first notes of the national anthem pierced the air, nearly 20 members of the Varsity Football team, varying in age and race, knelt in front of the crowd that had gathered for the 34-12 victorious Homecoming game against Dwight-Englewood school.

Over the past year, players at various professional levels have taken a knee during the anthem in what has become a much debated and to some controversial movement.

The number of players kneeling stands in stark contrast to last year’s Homecoming football game, in which only three players knelt, and the team did not discuss it beforehand, Ben Metzner (11), who chose to kneel, said.

“Last year I don’t think as many kids even had the idea of kneeling, but this year it’s become a large topic around America with Trump’s responses to people in the NFL, so now more people know about it and are more aware,” Kelvin Smith (10), who chose to kneel, said.

Co-Captain Jahmire Cassanova (12) was one of the three players who chose to kneel at last year’s game.

“At that time it was my own response to racial oppression within the country, but when the protests continued I’ve found that people have redirected what the purpose for kneeling is supposed to be and used their own reasoning to slander what the movement is supposed to be about,” he said.

Cassanova chose to take a knee a second time this year in a form of protest against racial oppression in the country, he said.

This year, more planning was put into the decision of whether or not to kneel so as not to single out members of the team, catch them off guard, or upset players in any way, Cassanova said.

Yoseph Kamran (11) chose to kneel to support his teammates and protest racial tensions across the country as well as the political response the movement has received, he said.

“I don’t think some of the things that President Trump has said regarding people who take a knee were appropriate at all, especially for someone who’s leading our country,” Kamran said.

In addition to the players who knelt at the Homecoming game, approximately five players put their hands on the shoulders of those who knelt.

“It’s not about making people try to see your point of view by making them do something they aren’t comfortable with, and we wanted to stress that idea throughout the meeting,” Cassanova said.

Several options for the team included linking arms or kneeling before the game, Metzner said.

“We believed in people choosing to kneel for whatever reason they felt like kneeling for, and that having the team make a demonstration took away from that idea and the individuality of it in some way,”  William He (12) said.

“If you were next to someone who was kneeling, you were supposed to put your hand on his shoulder as a symbol of support,” Kamran said.

Directly before the game on Saturday, the players held a 10-15 minute meeting in the multipurpose room to discuss different options given recent national events, He, who chose to stand, said. Members discussed the demonstrations of NFL teams and how professional players got the idea to kneel; players also shared their own reasons for kneeling, He said.

Coach of Varsity Football Matthew Russo, wanted to give the players the space they needed to make their decision as a team, Russo said.

Each player chose to kneel or stand for different reasons, with rationalities differing throughout the team.

Smith chose to kneel during the anthem. “The group of people who kneeled were mostly black, and I wanted to be a part of that and stand for what was right,” he said.

Ben Doolan (10 ) views kneeling as an act of peaceful protest and decided to do so after attending the meeting before the game.

“Even though I do not feel the pain and suffering of racial oppression myself, I knelt with my teammates for the sake of togetherness and support,” he said. “Just because it doesn’t affect me doesn’t mean that I can’t protest.”

Metzner chose to kneel after reading “The New Jim Crow,” an exposé of the systematic oppression of African Americans in the penal system, he said.

“That really opened my eyes, but I think it was as much an acknowledgement of inequality in the United States as it was a show of unity with other players on the team who were facing oppression more directly than I was,” Metzner said.

Zachary Brooks (10), a member of the Junior Varsity Football team, chose not to kneel. “My grandfather was in the army and it was not the right choice for me, but I support and respect those who chose to do so,” Brooks said.

Although opinions differed on whether or not to kneel, the team did not experience tension and remained brothers, Doolan said.

Spectators in the crowd had different reactions to the choice of some players to kneel.

“The national anthem is supposed to extol the tradition and history of the country,” Eddie Ahn (11) said. “I think kneeling can be representative of disrespect towards the flag and the military, although I doubt that any students meant any sort of disrespect.”

“I was appreciative of the fact that they kneeled during Homecoming,” Akida Joseph (11) said. “I think that Homecoming was an optimal time for this display because it’s a high visibility event – people had to acknowledge it.”

“I think that kneeling is an extension of our own awareness to national events and the logical step to show social awareness,” Richard He (11) said.

“I was pleasantly surprised,” Kelvin Smith P’ 18, ‘20 said. “I felt very proud of my son when I found out he was among the players that were kneeling and I was also proud of the other young men who participated.”