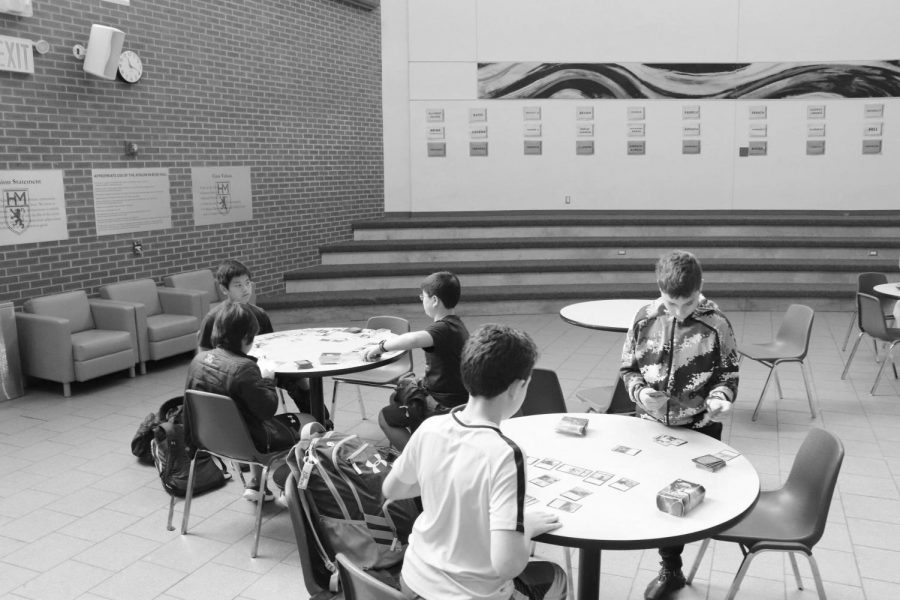 Each day, middle schoolers eagerly gather in the atrium during their lunch periods and frees to participate in the games of Magic: The Gathering (Magic) and Dungeons & Dragons (D&D). These games both encompass fantasy, and require major strategy. However, they differ in that Magic: The Gathering is a collectible and digital collectible card game, whereas Dungeons & Dragons is one that requires roleplaying and creating a story. Magic came out in the 1990’s and D&D was released in the 1970’s, but both are rapidly gaining increasing popularity and relevance within the MD community.

Magic is a card game in which two or more players take their collection of cards and fight with a variety of different mystical characters. Players cast spells, use artifacts, and summon creatures as depicted on individual cards in order to defeat their opponents, typically, but not always, by draining them of their twenty starting life points. There are different levels of value and rarity among the cards, thus resulting in the buying and selling of the rare ones. Some cards are worth thousands of dollars.

D&D is a roleplaying game that features a combination of fantasy lore and intense attention to detail.  In the game, players direct the actions of their character, as well as their interactions with other characters. It’s similar to creating a story, but the player decides the setting and all of the characters have a will of their own.

D&D club advisor James Brink said that both Magic and D&D really engage students’ creativity and imagination. There is a strong social element to each, and without electronic devices allowed in the Atrium the games have become great ways for students to get together, talk, and play, he said.

The Magic club was started by a group of passionate eighth-grade students. “It really grew when kids realized there was even a club dedicated to Magic, and that more importantly, there are several kids in the Middle Division who are always very eager to play the game,” club advisor and math teacher Gabriel Cunha said.

The Magic club has a dedicated room to play the game, but students still play in the atrium each day.“I really wanted to join the Magic club because several of my friends and I played, so we thought it would be nice to have an official club room, and a dedicated place to play, in addition to games in the Atrium,” Harry Lowy (8) said.

One of the MTG club’s founders, Luke Harris (8) initially became interested in the game through a friend. “At first, Magic was just another board game; until I got super into it over the summer of 2018, and have been playing more frequently since then, which led to the creation of the club with some of my friends,” he said.

Jisang Kymm (7) organized the D&D club after discovering the game during spring break, because he found the combination of both roleplay and fantasy intriguing. He felt that the game was something that others in the school would like as well, so Kymm proceeded to share the instructions with his friends and the club grew from there.

Middle schoolers have developed strong bonds and relationships due to their participation in these games. “It goes way beyond just the club– 6th, 7th, and 8th graders are regularly playing together at multiple Atrium tables during lunches and frees,” Brink said.

Olivia Coward (6) has never  played either game but has friends who do, she said. She finds the games to be especially beneficial for students to find a common interest, and form relationships around it, she said.

“The club has brought all the Magic players extremely close together because of their shared love of playing Magic,” Cunha added.

Clubs of all types foster new relationships and strengthen older ones, Director of Middle Division Guidance Wendy Reiter said. “When you consider that HM represents so many zip codes in the tri-state area, clubs do offer a critical opportunity for students to get together or just ‘hang out’ to have fun.”

Magic is no exception, and the game has brought about many positive interactions within the HM community. Brink said that until Magic took off this year, he’s never noticed so many students playing mixed-grade games.

Ethan Katz (7) is among the many middle schoolers who play Magic in the Atrium every day. “I met someone at camp who taught me how to play, and at first I didn’t know that others in my grade also played, but after I introduced the game to my school friends, it was great to learn they already played Overall, the game has brought us all much closer,” he said.

As the year progressed, many club members began to make the switch to Magic, which resulted in the D&D club becoming defunct. “Magic: The Gathering was actually the first popular game in the beginning of the year, so many people probably wanted to play it again,” Kymm said.

Magic is a simpler game, Cunha said. “It’s much easier to play a quick game of Magic than Dungeons and Dragons ever was,” Cunha said.

Many students felt similarly to Cunha when discussing the simplicity of Magic. “The Dungeons and Dragons club was more structured, with more defined members and a designated room to play, whereas the Magic club is extremely casual, as it doesn’t have a specific room which made it much easier to play,” Kymm said.

Luke Harris (8), a founding member of the Magic club, believes that Magic is more popular than D&D, mostly due to the long time requirement that D&D requires. “Magic doesn’t require a regularly scheduled playgroup and can be played with any other player at any moment, whereas D&D has much less flexibility, is a more daunting game, and a greater time requirement, thus making it the less popular choice,” he said.

D&D is a time-intensive game in which a single story may unfold over weeks. Brink feels that they found it especially challenging to get the whole group together consistently at one-week intervals.

Similarly to most of his peers and faculty, Harris said he prefers Magic because of its complexity and creativity. “Each deck feels less like a tool and more like a creation. Each card feels like it works as a gear in a massive ticking clock tower,” he said.

“Participating in clubs is extremely beneficial as it provides an important moment; one in which students need to make choices about how to spend their time. Given the range of choices with clubs, it provides students with a mechanism by which they can explore, experiment and imagine what they might be interested in or learn more about,” Reiter said.