Profile of A Potter: Mr. Renner 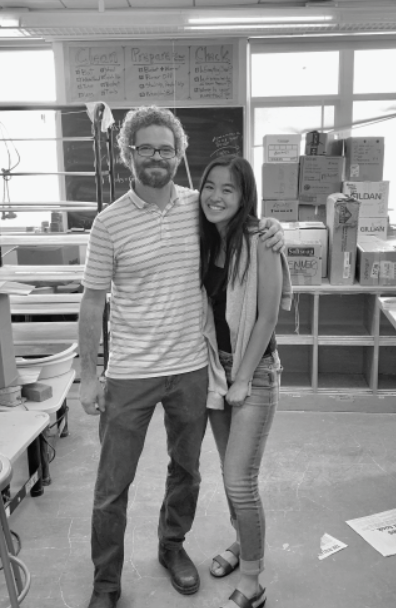 Ceramics teacher Keith Renner never thought that he would learn to love clay when he signed up for a ceramics night class while attending the Tyler School of Art and Architecture at Temple University. To him, ceramics was just a requirement for a Bachelor’s Degree and certification to teach in Pennsylvania, he said.
Growing up in a predominantly blue-collar community, Renner said that it was quite uncommon for students to continue their education in college and that he was the first in his family to pursue higher education. In fact, Renner only applied to a single school after putting together a portfolio at the insistence of Pete Murray, his high school art teacher, he said.
Renner was a roaming, undeclared art major who intended to specialize in photography, but the ceramics class helped him realize how photography was relatively removed from the material, Renner said. “When I took the clay class, I realized I needed to get my hands into something tangible and real; it was a mess and all over me, and there’s something really joyous about feeling the material,” he said. “It feels a bit like magic, transforming a lump of earth into something that’s never existed before.”
After earning his Bachelor’s Degree, Renner continued his studies of ceramics in a Master of Fine Arts (MFA) program at Southern Illinois University Carbondale. Renner said that he knew he wanted to attend a three-year program, and he also wanted to be a teacher’s assistant as it would cover his tuition and earn him a small stipend.
Renner said that his interest in teaching solidified as he neared graduation. “I was always the person who my peers would call into the studio when they had to work something out,” he said. “I realized that this was all sort of part of teaching and it was sort of at their recommendation that I started applying for teaching jobs.”
After receiving his MFA, Renner began working at the school, where he has worked for the past 17 years. The goal of the curriculum is to teach students to become responsible and autonomous artists, he said. His favorite memories are of students who came into the class thinking that they didn’t have it in them but ended up finding themselves in the studio.
“Renner does so much to keep the studio up and running; he recycles the clay, orders tools, fires the kiln,” Taimur Moolji (12) said. “He does all the logistical work that’s required to keep the studio so prolific.”
“My professional life ebbs and flows,” Renner said. He said he generally prioritizes teaching students, so his professional work is reserved for the summertime. Although his work tends to be different than what he teaches, Renner said that there are some commonalities. Perhaps the most prominent thread in his work is his reliance on clay as a natural phenomenon. For Common Ground, one of his professional exhibitions, Renner said that he watched as cracks and fissures formed on his pieces as the clay shrank around a cement core, tearing itself apart. He also enjoys a sense of adventure in ceramics work. “I find myself uninterested if I can see the outcome. When I start an idea and I can see the end result, I think ‘why bother,’ so I need a sense of adventure.”
Renner said that his work is also similar to his philosophy for his ceramics classes. “I set up a situation for something to occur and let the natural phenomenon take over,” he said.