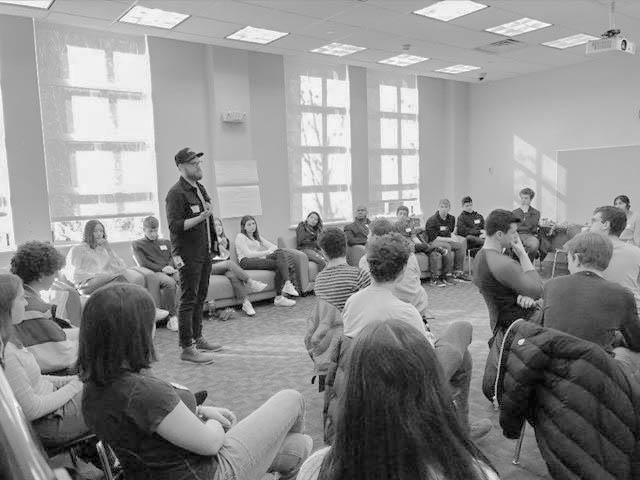 On Nov. 23rd, the staff from Seeds of Peace, a non-profit organization focused on leadership and conflict resolution, joined the school in the Multicultural Center for a workshop which discussed religion and faith and taught students how to empathize and create effective arguments when engaging in conversation.
The workshop was organized by Interfaith Network, a group created by students at the school four years ago. “The goal of Interfaith is to get to know people who you wouldn’t have interacted with otherwise and to get a better feel for what religious diversity is and the different realities that people face both in New York and in the world,” co-President Roey Nornberg (12) said.
As stated on their website, Seeds of Peace is a leadership development organization whose mission is to inspire and cultivate new generations of leaders in communities divided by conflict through respectful dialogue as well as bring individuals from different backgrounds together.
“The mission that they do on an international level is really what we want to do on a more local level,” Nornberg said. Interfaith held the workshop in an effort to introduce these values to the school. At the workshop, the staff at Seeds of Peace emphasized the importance of recognizing that everyone has a unique cultural perspective which can be utilized for effective discussions in class, Diana Shaari (12), co-President of Interfaith Network, said.
In the workshop, the students split up into groups and took part in activities that provoked reflection of what religion meant and the role it plays in everyone’s lives, Maya Nornberg (10) said.
Over 30 students from 10 New York private schools attended: students came from Trinity, Riverdale, Fieldston, Chapin, Friends Seminary, Dalton, Little Red School House, and Elisabeth Irwin High School, Shaari said. Although the students from the Islamic Al-Noor School were unable to make it to the event due to last minute transportation issues,the workshop was very successful, Shaari said. “I think some misconceptions about dialogue is that it has to be a debate and you need to come with formalized arguments,” Riley Neubauer said. Neubauer, a sophomore at The Chapin School, has been a member of Seeds of Peace for about four months. “That’s just not the case.”
“We ended up having a very meaningful and captivating conversations including personal experiences, opinions on current events, and other important topics and issues,” Maya said.
Nuebauer feels that these are conversations that need to be had on a greater basis, she said. “I think there is something really nice about students from a lot of schools coming together to have dialogue.”
The students were very passionate about the topics in discussion, Shaari said. “We had the opportunity to learn important tools to keep in mind while engaging in dialogue or any conversation with other people. This included self awareness, reflection, and empathy to ensure productive and positive conversations.”
“We spent some of the workshop trying these things out and taking part in other activities that let us meet new people and interact with them productively,” Maya said.
The group talked a lot about active listening, body language, eye contact, and how these expressions of human behavior play into a conversation, Neubauer said. “The facilitators of Seeds of Peace taught us to always speak for our statements and no one else’s.” “The workshop forced me to be conscious about how to step back and learn the tools to effectively engage in sensitive conversations,” Shaari said.
Neubauer enjoyed talking to people not from her own school and found talking about the relationship between religion and politics interesting, she said. “As a Jewish person myself, I often find it confusing that people conflate my religion with my stance in politics and I know that a lot of people in my dialogue felt the same way, so it was nice to talk to them about that.”
Roey hopes that students ultimately took away that difficult conversations are important to be had and that it is good to put yourself out of your comfort zone, he said. Interfaith Network is hoping to expand their group and make this workshop an annual event, Shaari said.