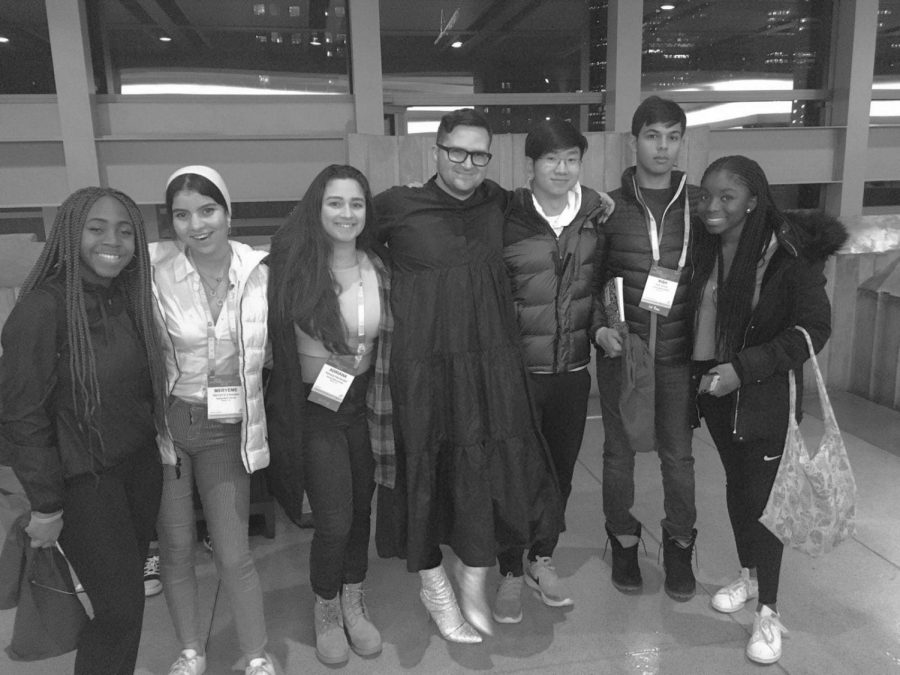 Speakers, experts, and students and faculty from independent schools gathered in Seattle, Washington last week for the annual People of Color Conference (PoCC) and Student Diversity Leadership Conference (SDLC) to engage in discussions and activities about cultural identifiers to supplement the dialogue that occurs in affinity groups surrounding such identifiers.
“It allowed me to explore the environment outside of Horace Mann,” Simon Yang (12) said. “It really made me think outside of the community we live in.”
As stated on its website, PoCC is the flagship of the National Association of Independent Schools’ commitment to equity and justice in teaching, learning, and organizational development. PoCC and SDLC, although separate conferences, are run together and have the opening and closing ceremonies combined.
The PoCC conference is made for adults by adults, Co-Director of the Office for Identity, Culture and Institutional Equity John Gentile said. “In its essence, the PoCC is a space for people and educators of color to come together and engage in community-like activities and team building exercises.” Whereas, SDLC is a multi-racial and multi-gender diversity conference focused on developing students into leaders around issues of equity and inclusion, he said.
“At the SDLC conference, we spent a lot of time talking about our core cultural identifiers— race, gender, sexual orientation, age, ability, family structure, religion and socioeconomic status, and how they affect us and the way we see and experience the world,” Nshera Tutu (11) said. “It really challenges me by allowing me to see the privilege that I have, and use it to advocate for other people.”
Tutu appreciated how respectful and open the dialogue was, she said. “One issue we discussed was kneeling for the anthem vs. standing, and although we had our differing opinions, no one was ever attacked or made to feel bad about their opinion.”
Yang recalled a specific activity they did at SDLC which involved silent movement and calling out specific identifies such as socioeconomic status, ethnicity, and religion. People would stand up for what they identified with, he said. “It’s great to see so much diversity and vulnerability in one room.”
Gentile hopes that students ultimately left the conference feeling like they have a purpose and direction, and the tools to operate on some of the ideas and visions on how the school can become more equitable, he said. “I hope they feel reenergized to put some of that leadership back into our institution and want to be leaders in our community around issues about equity.”
This year, SDLC hosted a talent show where people could sign up and perform anything they wanted, Tutu said. “One thing that really struck me was how supportive everyone was throughout the show—every single person was met with thunderous applause after they finished.”
Middle Division (MD) math teacher Susan Ma learned about the importance of incorporating social justice into the classroom. Ma is also interested in starting an MD affinity group for the Asian community at the school, as well as increasing an understanding of the wealth disparity throughout the school and the difference in experiences that students who receive Financial Aid have, she said.
At the conference, students were able to join the affinity groups that they identified with. Tutu loved for the Black affinity group she was a part of. “I had never been around so many Black teenagers my age who were experiencing the exact same things that I have,” she said. “I felt so comfortable because I knew that my identity was validated and affirmed in that space, and that no one was questioning my Blackness.”
This year marks the 26th year of SDLC and the 32nd year of PoCC. Speakers included Dr. Joy DeGruy, who presented about her book “Post Traumatic Slave Syndrome,” Tutu said. Yang found Dr. Joy DeGruy’s speech moving, as it discussed about how the history of discrimination is embedded into today’s society, very interesting and moving, he said. “What she had to say was very powerful and she was a very engaging speaker overall.”
Upper Division English teacher Rebecca Bahr said she was surprised to learn the true story behind the Statue of Liberty at PoCC from DeGruy’s talk. The statue was originally made to symbolize the end of slavery through a torch in one hand and broken chains in the other, but the US instead placed the broken chains under the statue’s foot, she said.
One of Tutu’s most memorable experiences from SDLC was singing “Lift Every Voice and Sing,” often called the Black National anthem, with her affinity group, she said. “It took me back to my time at my predominantly Black elementary school, and how we would sing that song before every assembly, right after the national anthem,” she said. “It really united the entire room in such a powerful way, and I still get goosebumps thinking about it.”
Students and faculty applied last spring to be considered for the trip. In total, six students and 31 faculty and staff were chosen to attend. To apply, students had to fill out several short answers and underwent an interview process. Gentile expressed the stress around organizing hotel rooms, managing transportation, meals, and other details. “It takes a lot of behind the scenes,” Gentile said. “We have been planning since August.”
The conference itself also requires energy and effort put in by the students. “We have full days from about 7 a.m. to midnight for the faculty, Gentile said. “It’s long and wonderful and transformative, and every year, students move away feeling like they came and got what they needed,” he said.
“It was so moving to see students be so openly vulnerable and emotional in a room of almost two thousand strangers,” Tutu said, “I hope to use the knowledge that I gained to replicate the love and support I found at SDLC.”