Model Congress blazes through first conference of the year 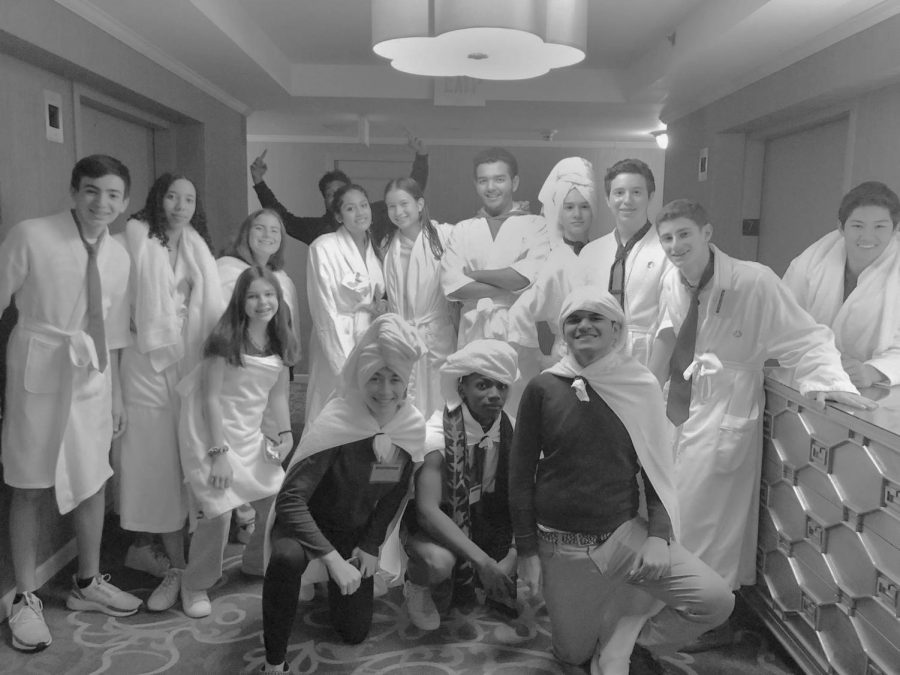 This past weekend, the Model Congress team competed at a major conference held at Yale University. The team departed after school on Thursday and debated for four days before returning home on Sunday evening.
The Yale tournament was the first conference for the club this year, so many of the weeks of preparations beforehand focused on the expected structure of the competition.
“Model Congress is relatively early in the year, so we basically jump right into it,” Co-President Malhaar Agrawal (12) said. Much of their time as a club has been devoted to working one-on-one with new students who had to create and learn the format of bills and build good topics, he said.
The two principal portions of the conference were the small committee sessions, which were around 20 people each and centered around a specific theme, and the full sessions, which included around 100 to 120 debaters.
“Everyone would go into their committees and the committees could be anything from the judiciary, education, the workforce, and the environment,” Malcolm Furman (9) said. “I was in Energy and Commerce and we gave pro speeches for bills and con speeches because ultimately you want to try and get your bills passed.”
But even with the prior training, the newer members of the club faced several obstacles, and they were forced to confront them face-to-face. Having never been to Model Congress competitions before, they could only rely on background information and general knowledge.
“We were assigned our committees beforehand and there were never two people from the same school in the same committee, so you’re with like a bunch of different kids from different schools,” Furman said.
“It is definitely one of the most challenging competitions we can have during the year because Yale draws the best teams from around the country,” Amman Kejela (12) said.
Most of the people that debaters interact with are other schools’ upperclassmen, who have had years of experience and practice with formulating ideas and responses to issues. This was a particular struggle for Furman, who had never attended a conference before, he said.
“It was essentially super intense crash course on public speaking, which is one of the number one skills you need for any type of debate,” Kejela said. “Some of the skills you can really only learn by just going in and doing it, so I think that was definitely a huge educational moment for me,” he said.
The challenges, however, were not limited to underclassmen specifically, as the training and mindset of the seniors were also tested during the process.
“I have one person who is truly the competition and it always ends up coming down to us two, or two or three people, so I was quite nervous I really didn’t think I was going to win,” Vice President Irati Egorho-Diez (12) said. “I almost went in with a sense of like that’s it you know, it’s already won, but I’m really glad I ended up pushing through and fighting for us, because it worked out in the end,” she said.
Most of this hard work paid off, though, as all of the seniors and presidents on the team won a gavel, the first place prize for a committee member, and many of the other members received “honorable mention,” the second-place prize, amongst the 750 delegates who attended, Allison Markman (9) said.
“There were days in which we were debating for seven hours,” Egorho-Diez said.” By the time you get to your hotel room, it’s midnight, you do the debrief, and you’re completely fried.” With the amount of dedication and work put in, going home with the nice little box and the gavel in it is a nice way to close it out, she said.
The three presidents, Amelia Feiner (12), Charles Simmons (12), and Agrawal each won a gavel in their respective committees, as did Egorho-Diez.
“It was a very strong showing and very promising for moving forward,” Agrawal said. “It’s also a real testament to the strength of our class as well as the mentorship abilities that we can confer to our younger students,” he said.
The guidance of the presidents for all the members was also a huge role in the outcome of the competition as it was their first event in their leadership positions.
“It was definitely a great learning moment for the leadership of managing a team of 15 students, and balancing everything was an unforgettable experience,” Agrawal said. “I’ve done Model Congress for several several years, so this was interesting because I was spending most of my time mentoring other students and then focusing on myself, which taught me that time is very valuable,” he said.
The Model Congress team’s hopes and goals for the upcoming school year are higher than ever before, in light of the results the members received from the major conference. Not only did the team bring back multiple awards, they also grew closer as a family because of they social element of the event, said Kejela.
“It was really fun to go out to dinner with everyone, hang out, and play games. I feel like I have made a lot of new friends in my community,” Markman said.
In comparison to other Model Congress conferences, the team was super unified and the dynamic was really incredible; it was one of the most fun overnight conferences at the school, Diez said. “Whether or not you win an award, it pays off. It’s so much fun, so the closing ceremonies that happened for an hour on Sunday really don’t make or break your conference.”