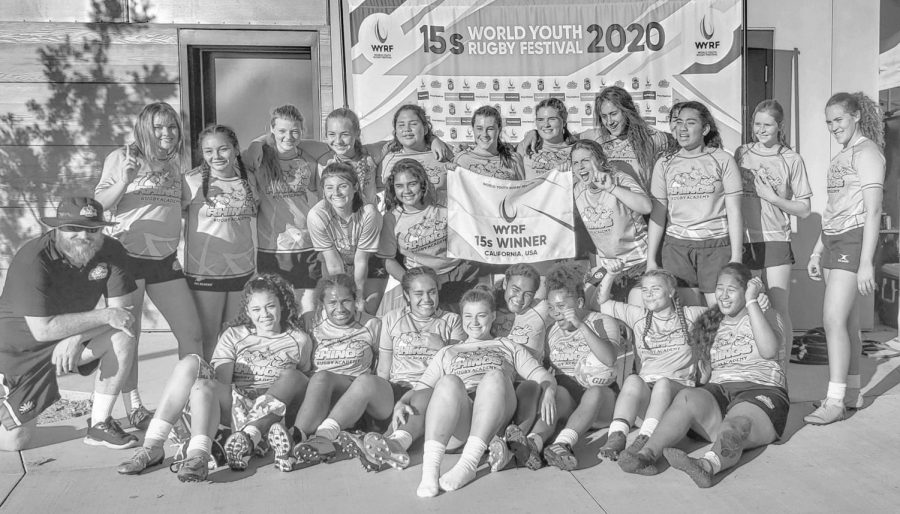 After attending a nationwide talent search in November which consisted of a seven-hour practice and evaluation session, Catherine Mignone (10) was selected as the only girl from New York to attend the World Youth Rugby Festival (WYRF). Mignone spent her winter break competing in the WYRF tournaments in Irvine California alongside girls from all around the globe.
The WYRF brings together young rugby players from all over the world to promote the sport and its values of teamwork, respect, and accountability. They hosted their first annual tournament in 2018. At the event, teams from South Africa, Canada, and the US came together to compete in a series of rugby games over the course of five days.
At the tournament, Mignone met Naya Tapper and Hope Rodgers, two members of the USA Women’s Rugby Team. “I’ve looked up to these players on the national team for my entire rugby career,” she said. “It is incredible to meet your role models, and even more incredible to play with and learn from them.” Tapper gave Mignone advice on her pass technique and position on the field and cheered her on during the games, she said.
Mignone played inside center at the tournament, a position that involves a lot of defense and offense, she said. “I played with and against college freshmen,” she said. “It was certainly challenging, but a very valuable experience for me.” Mignone feels she improved her tackle technique and stiff arm, and she can’t wait to keep getting better in the upcoming tournaments and through training, she said.
At first, Mignone was nervous to play at the tournament, but she gained confidence through her success in the games, she said. “The experience in its entirety was incredible,” Mignone said. “I definitely improved my knowledge of gameplay through playing with a new group of girls, as I had to be even more aware of exactly what was going on on the field.’’
Mignone spent time with her teammates before and after the games and gained many new friendships, she said. “Some teams from South Africa didn’t speak English on the field so the opposing team couldn’t understand them and predict their plays,” Mignone said, “It was awesome to realize that I am a part of a multinational community”
Mignone was selected for a few future tournaments and programs in Las Vegas, Colorado, Portugal and California with Rhino Rugby, she said. Rhino Rugby, who helped organize WYRF is one of the leading rugby companies in the world.
Mignone was introduced to the sport through her father, who played rugby in college, and she started playing three years ago. “I have always been a bit of an aggressive athlete, so rugby was perfect for me,” she said.
Mignone fell in love with the sport immediately, she said. “The community that you get from playing rugby and the athletic abilities you gain makes you a great all-around athlete, and it opens up this new world of athletics,” Mignone said.
In 2016, Mignone played for a rugby club team in New Jersey called Morris Rugby. She joined the team for an international tour in Ireland in the summer of 2017 and attended two Nike rugby programs in the following two summers, she said.
After many meetings with Associate Athletic Director Ray Barile and Director of Athletics Robert Annunziata, Mignone successfully created the school’s first Girls Rugby Team two years ago. “Last year was our team’s first season, and we killed it,” Mignone said. The team is hosting an organizational meeting on February 6th and is looking forward to the team’s upcoming season, she said.
Micaiah Chang (10) said that Catherine brings joy and support to the rugby team. “She encourages and leads the team without ever being mean,” she said, “Personally she’s been a huge part of my progress and relative success in the sport”
In one game against the French-American school last season, Irati Egorho Diez (12) recounted a time when Mignone started seriously bleeding after she was tackled. “She just wipes it off and she gets back on the field and she keeps playing,” Diez said. “That was the catalyst and then she got super focused and made some of the most beautiful plays I have ever seen.”
“Rugby is a really big part of who Catherine is,” Hanna Hornfeld (10) said. Hornfeld feels that although Catherine isn’t an official team captain, she embodies the role, she said. “When the rugby team first started, most of us had never played before in our life or even knew how the game worked, but Catherine worked really hard to make sure that we all felt like we could learn and she saw what all of our individual talents were,” she said.
Gaby Peralta (10) expressed a similar sentiment. “Catherine was extremely supportive and really helpful when it came to understanding the game,” she said. “She is an amazing player and made so many great plays.”
Mignone explained that her favorite part of rugby is becoming friends with her opponents after the games, she said. “You may be tackling each other on the field but after the game, you eat cupcakes with them.”