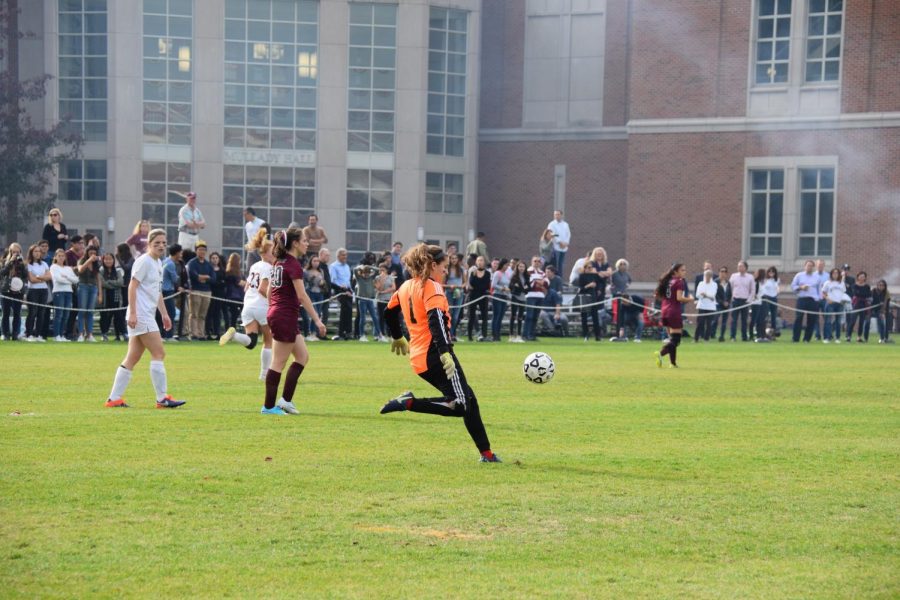 This past Friday, the Girls Varsity Soccer team played in the New York State Association of Independent Schools (NYSAIS) semi-finals. This is the fourth year in a row that they have made the playoffs, and after three consecutive years of winning the Ivy League, the team lost 0-1 to Riverdale.

The team had an 11-3 record this season winning their third straight Ivy League title Coach Tim Sullivan said. They worked more as a team this year than in years past Maya Scholnick (12) said. The team spent practices doing drills to help them with areas they had struggled with in past games, Scholnick said.

“We practice for every single game throughout our season like it’s the most important game. So, when it came down to practicing for the playoffs, our practices didn’t feel that different since our intensity is always there throughout the season,” Jane Frankel (12) said.

The ten seniors on the team all lead by example and created a fun and hardworking atmosphere during practices, Kiara Royer (10) said.

“The NYSAIS games were no different for us than any other game this year. We prepared every day to achieve success. I am not only proud of our results but very proud of the way the team approached every day,” Sullivan said.

The keys to the team’s success during the tournament were focusing on playing simply and keeping possession, Scholnick said.

“We worked more as a team this year and tried to play to our strengths, like the speed we had up top, and we had amazing talent in every position so we were able to work very well off of each other,” Scholnick said. The team also worked on, “crossing the ball back across the six for our center mids to run onto it for a one time shot,” she said.

“Although we lost a lot of starting seniors from last year, everyone worked their hardest to compensate. If we lacked the skills for something, we made up for it with heart and the belief that we would win for each other is what drove the team forward, especially in the NYSAIS games,” Royer said.

“100 percent of our heart and love for not only the game, but for one another was the driving factor of our success this season. We definitely had talent, but at the end of the day the whole league is talented, so it came down to who wanted to win the game more and we always came out on top,” Frankel said.

“Even though it was disappointing that we lost in the semis, I think it was more of a sadness that the season was over rather than the loss because we had such a fun season together,” Royer said.

“Of course it was heartbreaking to lose, but that heartbreak mostly came from knowing that I wouldn’t be playing with these girls every day after school. Everyone worked their hardest during the game which is all we can do at the end of the day, so as sad as it is to have lost it, we ended it the same way we played every game and there were absolutely no regrets,” Frankel said.