Varsity Squash battles the other hill schools early in the season 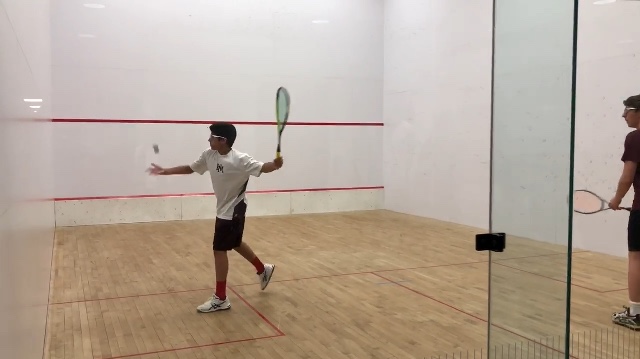 NOT A VEGETABLE: Kush Malhotra (9) winds up before starting the point

Coming off two big wins against Fieldston and Riverdale, the Varsity Squash team heads confidently into its match today against Dalton, co-Captain Siddharth Tripathi (12) said.
The team hopes its success over Fieldston and Riverdale translates well into against Dalton, with whom it has had a roughly even record over the past few seasons.
“I don’t think we’ve lost to [Fieldston] in three or four years, so we were feeling pretty confident about Monday. The matches against Dalton are always close; we sometimes play it out, we sometimes lose,” Tripathi said.

The team went undefeated against Fieldston, winning every one of its matches.

”We won seven to zero, no one lost a match, everyone played pretty well, and it was an easy victory,” Lehv said.

“I think as a team, we got some stronger players, and we played very well today – everyone seemed really ready to go and was excited about the match,” Lehv said.

Going into the year, the team didn’t lose any players, since no seniors played on last year’s team, Tripathi said. This helped the team retain its chemistry, which ultimately improved with the addition of the freshmen players.

“Although squash is an individual sport, the matches really allow us to come together as a team and support and cheer for one another,” Rhea Sanger (10) said.
“We’ve been bonding as a team and supporting each other during matches. I think because of this there are not many nerves, and everyone is feeling more relaxed because they know that they have the support of their team,” Lehv said.

As for the match strategy, the team planned on starting off aggressive and focused, and maintaining that mindset throughout the match, Tripathi said. “If we are aggressive in every single match that we play this week, regardless of the opponent, I think then we will get the result we are looking for,” Tripathi said.

The team also changed the order in which its players play this season. Co- Captains Aman Sanger and Connor Morris play first and second in the lineup respectively. Lehv plays third, he said.
This year, in preparation for the matches, the team placed a greater focus on fitness and conditioning than it has in the past, spending more time during practice running around the track or doing court sprints along with other exercises.

One thing we’ve been working on this year is certainly fitness. After last year we realized we had a lot of tight matches with Poly [Prep] or Hackley that could have gone either way, but maybe they didn’t go in our favor because of the fact that we were not as conditioned as we should have been. I know Coach Beller has done a great job making sure that every practice we are not just playing squash,” Tripathi said.

After opening up the season with two victories, the Lions hope to use its momentum to build on its immediate success throughout the season and continue to win its games.