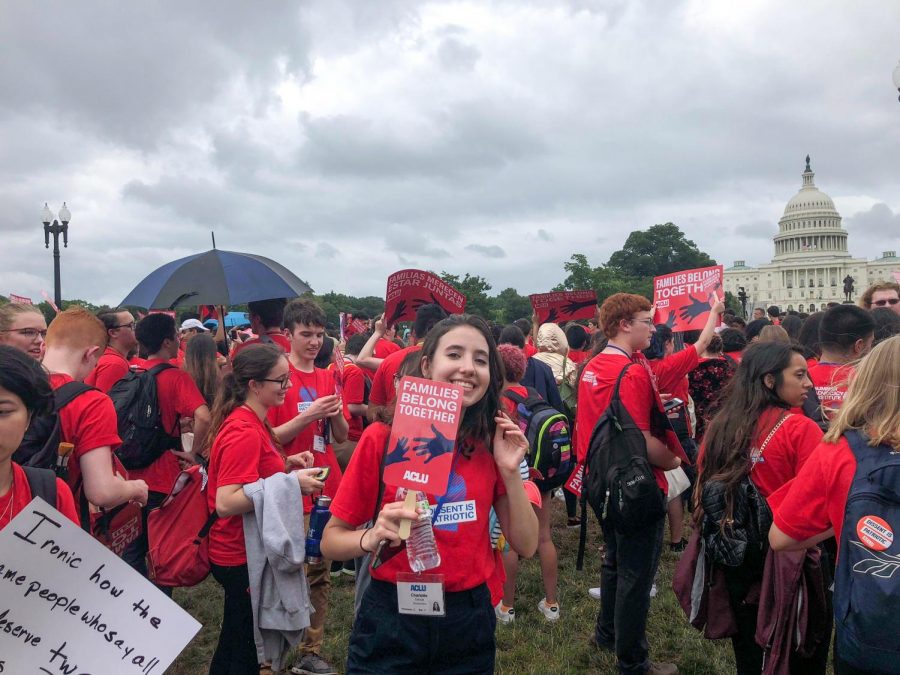 According to the Washington Post, two-thirds of the American public reacted negatively towards the new Trump policy. Many students had similar views.

“It’s so sad that this is how we’re reacting to the people that want to come to the U.S.,” Gabby Fischberg (10) said. “Regardless of if the people are legal or illegal, this shouldn’t be a step we’re taking. Law’s don’t forces the administration to separate families,” she said.

“Children are not bargaining chips to be used in preventing their parents from doing something [illegal], Emily Yu (12) said.

National Public Radio (NPR) found that between 2,000 and 3,000 children, ranging from infants to 17-year-olds, were separated from their parents from April to mid-June.

According to NPR, some immigrant parents were sent back to their countries, without knowledge of when they could see their children again. There is no official way to track the parents and their children.

This will impact the children in the future, especially the younger ones, Fischberg said. Some immigrant children were reportedly subjected to physical and sexual abuse, she said.

“[President Trump] is not thinking about how this is affecting the people involved,” Taussia Boadi (11) said.

During the summer, Surya Gowda (12) worked with an organization called Volunteers of Legal Service under the Immigration Projection, which assists immigrant families with legal services.

“I got to know the kids through their files,” Gowda said.

In addition to working in their office, Gowda assisted immigrants with Deferred Action for Childhood Arrivals (DACA) clinics, where she was able to interact with clients directly, she said.

“There’s so much fear, tension, and uncertainty in their eyes and faces. You’re pushed into acknowledging it,” Gowda said.

“Trump is putting money into the Department of Homeland Security (DHS) and Immigration and Customs Enforcement (ICE) to increase the number of beds and watchdogs, not putting it towards [immigration] documents,” Charlotte Cebula (11) said.

According to a NBC report, thousands of people marched to protest family separation with the slogan “Keep Families Together.” 600 marches and rallies were conducted throughout the country.

As part of the Summer Advocacy Program run by the American Civil Liberties Union (ACLU), Cebula participated in a rally. “They held the rally in front of the Capitol Building after meeting with our elected representatives in the House and Senate,” she said.

Students from the program spoke about their own personal experiences with ICE and DHS, Cebula said. “I was submerged in the most diverse community full of students who all had a common goal: protecting civil liberties in our country,” she said.

“Trump first claimed that it was going to help prevent human trafficking. When he realized that all it did was give immigrant children PTSD while putting parents seeking asylum through a nonsense detainment procedure, he said it was the Democrats’ fault,” Ishaan Kannan (11) said.

“Trump is just demonizing the Democratic Party because he’d gotten a lot of pushback from them,” Cebula said.

“I think Trump is trying to bolster the sentiment that Democrats are bad by using incendiary comments to portray feelings rather than facts,” Yu said.

Malhaar Agrawal (11) argued that the separation policy attacked the wrong group of people.

“Families integrate better into society. It’s the individual cartel members that Trump should be focusing on,” Agrawal said.

“I can’t imagine being separated from my mother,” Boadi said. “There’s a point when you have to realize that humanity comes first.”

“At this point, I’m just waiting for the next outrageous policy Trump can pass,” Kannan said.