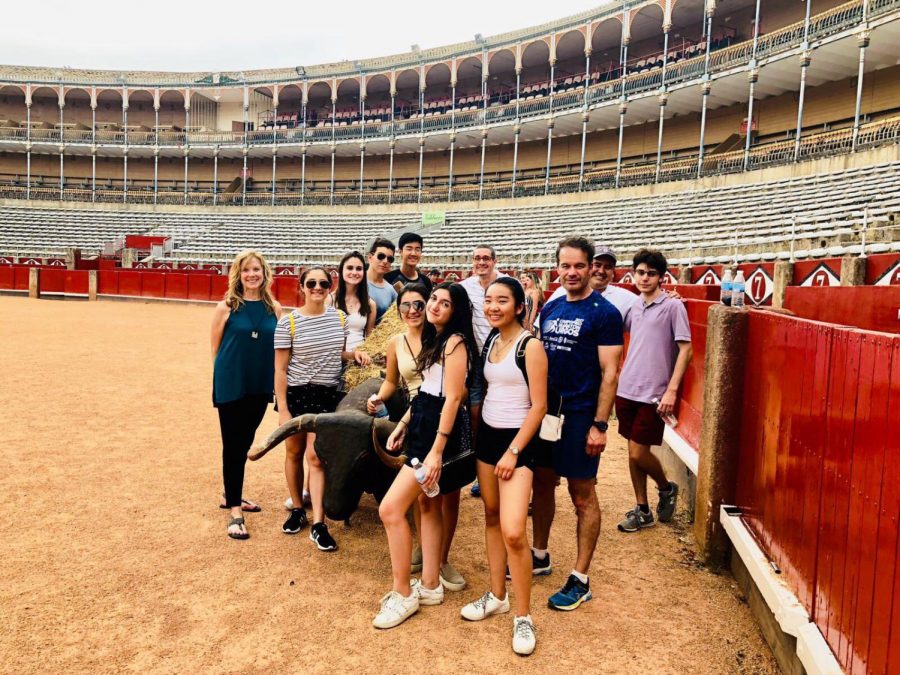 Two teachers and eight students travelled to Salamanca, Segovia, Madrid, and Avila this summer to study Spanish at the University of Salamanca and explore the culture of Spain.

“We chose Salamanca because their Spanish program was highly recommended for high school students, and while it’s great to just tour a city, we were looking for something deeper and more meaningful for the students,” Foreign Languages Department Chair Susan Carnochan said.

“Salamanca has devoted a lot of resources over the last few years to being a teaching Spanish city. It’s also very authenticly Spanish and has so much history and culture for students to learn about,” Spanish teacher Arni Alvarez said.

The group spent the majority of the trip in Salamanca where they studied as part of the Unamuno Spanish program, taking classes at the University of Salamanca for four hours during the day. At night, the group toured famous sites and explored the city.

“What I enjoyed the most about the university was that we were really able to practice our conversational skills,” Diana Shaari (11) said. “The main portion of the day was devoted to immersing ourselves in the language instead of just learning from a textbook.”

“The class was very conversation-based, and we spent a lot of time talking to each other in Spanish,” Andrew Cassino (11) said. “The Spanish courses at Horace Mann don’t focus as much on communication as the courses in Spain.”

In addition to honing their Spanish skills, the students explored the city of Salamanca and learned about the culture of Spain. They stayed at a residence in Salamanca about a mile away from the university and met and conversed with numerous local Spanish speakers as well as Spanish students from around Spain and the world.

“Even now I’m still in touch with many of the Spanish kids we met in Salamanca, and it’s been really cool to learn about their lifestyle, like their late meal times and siestas,” Shaari said.

“The students lucked out that they were able to talk to the college students so often. This allowed them to use the language spontaneously, which really is beneficial,” Carnochan said.

The group took day trip tours of Segovia and Avila, and visited famous sites such as the Alcazár of Segovia. They spent their last day of the trip in Madrid, touring the entire city.

“After going to Spain and conversing with native Spanish speakers, I feel much more confident going into my Spanish course this year,” Shaari said.

“It was an amazing experience for the students and also for the instructors, and I would definitely do it again,” Alvarez said.

“I feel much more comfortable conversing with native speakers, and I feel that I have a stronger grasp on the language,” Cassino said. “I’m more confident using Spanish, and I want to continue to learn more about it.”