Tennis courts to be installed by spring 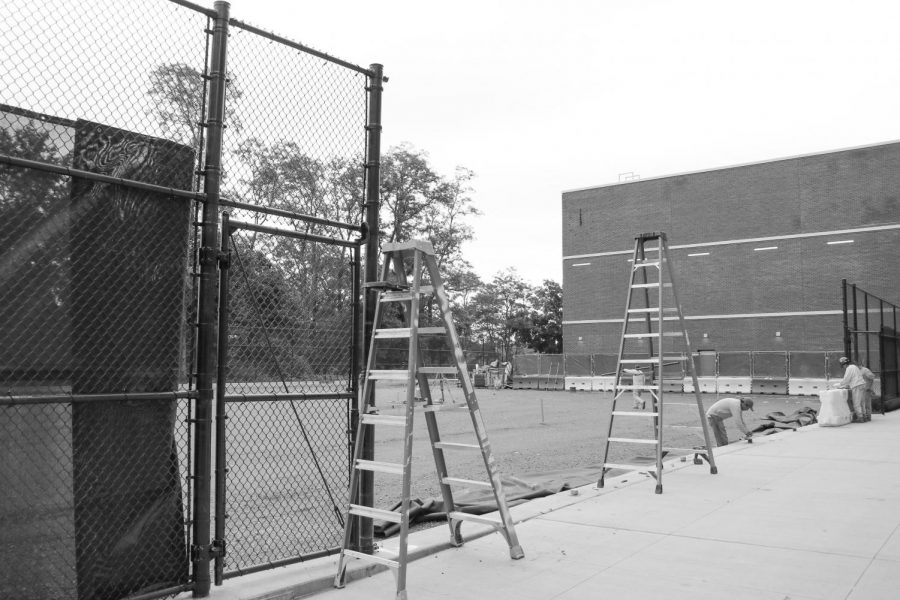 Four courts will be installed behind Lutnick Hall later this fall and should be operational by spring, Head of School Dr. Tom Kelly said.

Discussions had been taking place as to whether the school should use the space behind the new construction to install a turf field instead of courts, because the long term goal of the school is to construct five courts by Broadway behind Rose and Fisher Halls within the next two years.

Members of the Girls Tennis team had hoped to play their Homecoming match on newly-built school tennis courts behind Lutnick Hall. Those courts have yet to be built, and the tennis team played Saturday’s match in Van Cortlandt Park, as they have for the past two seasons.

Kelly emphasized the potential advantages of having courts on Broadway, which would include lights, a protective bubble, proper viewing, and five full courts. “However, these advantages are not driving the decision making. We really are focused on finding a permanent home for the tennis courts,” he said.

Gibby Thomas (12), co-Captain of the Girls Varsity Tennis team, was disappointed by the lack of tennis courts on campus for Homecoming. The situation was “very frustrating because we have been undefeated for four years in a row and there is no other team like that in this school,” she said.

Connor Morris (12), co-Captain of the Boys Varsity Tennis team, expressed similar frustration over the absence of on-campus playing space, as one of the first highlights he noticed about the school was its great courts. Morris, who came in ninth grade, has been playing competitive tennis since middle school but hasn’t had the chance to use the school’s courts since his freshman year.

Thomas first grew frustrated when she found out a week prior to Homecoming that the courts wouldn’t be ready for the big day. Through rumors going around and seeing that construction on the courts didn’t show signs of progress, Thomas realized the team would be playing in the park.

Boys Varsity Tennis player Roey Nornberg (11) wishes that he had been informed of the possibility of not having tennis courts rebuilt this year, so that his expectations wouldn’t have been so high, he said.

Spencer Klein (11) explained that the courts were first demolished after Homecoming his Freshman year and with no on-campus courts, tennis players have to walk down the hill to Van Cortlandt Park to practice, he said.

Other time consuming factors, according to Nornberg, include the requirement to have a chaperone accompany the walk down to Van Cortlandt, which is difficult to organize, he said.

Sidh Chawla (11) said that it would be helpful to have on-campus courts as walking down is too time-consuming with huge bags.

The distance from the school to Van Cortlandt Park also lessens the number of spectators attending the matches.

With fewer spectators, both Thomas and Long said playing down in Van Cortlandt makes home matches feel a little less at home because the team is so isolated from the campus community. Tennis would be more central if there were courts close to the center of campus, to not only increase the number of supporters but also increase the spirit, Morris said.

“Isolation can be avoided,” Isha Agarwal (11) said. Because the campus already has a surplus of fields, adding another one seems unnecessary, she said.

Girls Varsity Tennis player Sabrina Freidus (10) was new in the ninth grade and never had the chance to play on the school’s courts. For as long as she has been on the team, she’s been practicing down in Van Cortlandt, “so there’s really nothing to miss,” she said.

Despite the disadvantages of having to travel down the hill to practice, this walk ultimately helps members of the team bond as they blast music and have singalongs, Long said.

Rawlins Troop, Girls Varsity Tennis Head Coach, would love on-campus tennis courts, but understands that there are other priorities, he said.