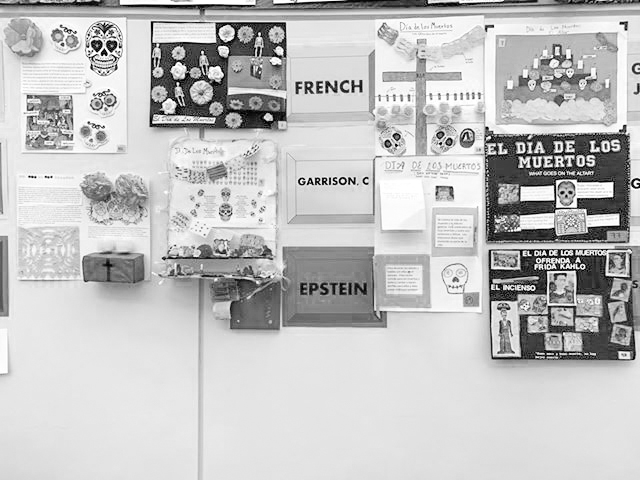 Vibrant artwork lines the walls of the atrium as Middle Division (MD) students and teachers admire the creative work of students celebrating the annual Day of the Dead holiday with their Spanish classes.

In Mexico, the official celebration of the Day of the Dead occurs on November 1st and 2nd, but preparations for the holiday begin on October 31st.

“Mexico is the country that has the highest population of Spanish-speaking people, so it’s really important to see how such a wide population celebrates such an important day in their culture,” MD World Languages Department Chair Valerie Maté-Hunt said.

Each grade participated in its own unique activities. It has become a tradition for the sixth graders to complete word searches and arts and crafts, the seventh graders to design posters, and the eighth graders to create altars for famous figures from Spanish speaking countries, Maté-Hunt said.

“Each grade worked together on their own projects and then we all looked at and admired each other’s work,” Sophie Li (6) said.

“We built altars for a specific person by showing some of their favorite items and traditional Spanish items for the Day of the Dead,” Zachary Ludwig (8) said. “The experience really help me learn terms, Spanish traditions, and the history behind the celebration.”

Building the altars gave the eighth graders an opportunity to express their creativity, Zarar Haider (8) said. According to Ludwig, the Day of the Dead presentations differed from other projects because the students worked creatively to build altars instead of simply writing and displaying pictures.

“The presentations gave us the opportunity to practice our Spanish speaking skills, which we normally don’t get to do much,” Gavin Song (8) said.

This year, the Day of the Dead celebration invited even more of the student and faculty to join in with the celebrations. Although only the Spanish students complete the activities, their creations are available for the whole division to view and learn from.

“This has been the biggest celebration in the Spanish department yet. We even invited a lot of the faculty to dress up in Day of the Dead clothing,” Mate-Hunt said. “Next year, we plan to invite all of the students to dress up.”

The celebration gave students an opportunity to learn how Spanish and American traditions differ, as Spanish people “embrace the dead, unlike other cultures that tend not to talk about it,” Li said.

“As a language teacher, I always say to my students that they are learning how to speak another language, but better than that is culture,” MD Spanish Teacher Dr. Rhashida Hilliard said.

“I’m not sure how often they would explore these ideas on their own, so we do like to include the cultural aspects of the language in events like this,” she said.

“They’re creating things the same way other kids and families do in a Spanish-speaking country,” Maté-Hunt said. “The experience opens a window of what it is that people just like them are doing in other countries.”

The idea that people in Mexico used the Day of the Dead to celebrate their past relatives instead of mourn them is very interesting and different from the culture in the United states, Hader said.

“It taught me that the dead should be celebrated. Of course, they should be mourned, but also celebrated that they’ve been given a chance at life, and what they did with that chance was beautiful,” Jason Xia (8) said.