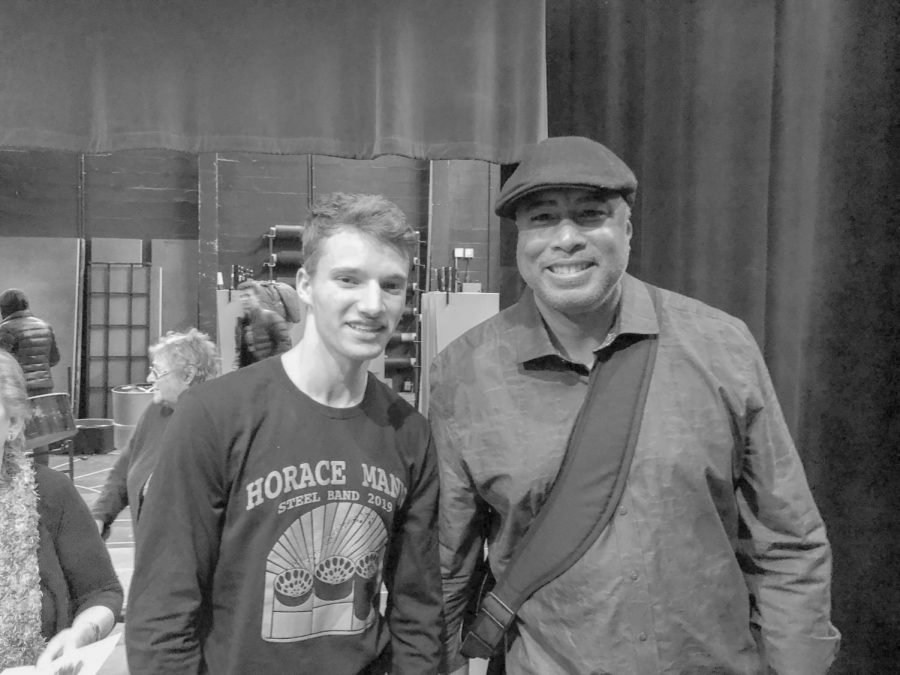 Minutes before the second steel drums performance started, Head of School Dr. Tom Kelly and drummer Donald Howard (11) stood in Olshan Lobby being interviewed by Channel 11 News. Most performances at school don’t garner such media attention, but when a famous baseball player turned guitarist comes to play alongside students, the press gets involved.

From 1991 until 2006, Williams was a center fielder on the New York Yankees and helped lead his team to four World Series championships. Since retiring from baseball, he has created two jazz albums and earned a Latin Grammy nomination.

Williams first came to the school for an assembly in October of 2016. “There was a marvelous opportunity to meet the gentleman, and his band played. It was wonderful,” Music Department Chair Doug Epstein said. “He wanted to come back, we wanted to get him back, and the first time we’ve had a chance to finally make it happen is now, with the steel band,” he said.

When Williams first visited the school, he ended up touring the music department and was fascinated by the steel drums. “He asked a lot of questions and was really interested,” steel drums teacher Alan Bates said. “Afterwards, his manager told me that he wanted to come play with us sometime. This concert was set up to be only steel band, so this concert seemed the ideal time to bring him back,” he said.

Students were jazzed to learn they would be playing with Williams. Max Migdon (10) was excited to find out he would have the opportunity to play with someone he knew about from baseball, he said.

It came down to the wire for rehearsals, especially since Williams could only rehearse the day before the performance, Solomon Katz (12) said. “I was really impressed with how well the other bands were able to pull together after finishing their songs only recently,” he said.

‘“I liked hearing more modern songs on the steel drums,” Kate Golub (12) said. ‘Toxic’ by Britney Spears and ‘How Far I’ll Go’ from Moana were among the modern songs that Golub appreciated listening to with the new twist, she said.

“All of the musicians were very focused which helped them work together as a team to create a coherent piece of music,” Samuel Keimweiss (11) said.

“Some of the songs were chosen by me, some were student requests, and a couple of them were chosen with Bernie Williams in mind,” Bates said. “His manager told me he loves ‘Oye Como Va’ and his manager also suggested ‘Pan Fried,’ which is an original of mine because he thought it would be a good song for Bernie to play,” he said. “’Afro-blue’ I chose because I also thought it would be good for Bernie to play knowing the style of music that he likes,” he said.

The A Period steel bands class revived “La La Jam Back” and “I’m Blue” from their last concert, and they introduced “How Far I’ll Go” from Moana and, by popular request, “Toxic” by Britney Spears to their repertoire.

The C class Period played “Get Up Stand Up” and “Oye Como Va” with Williams in addition to“Samba Reggae” and the overall crowd pleaser, “Feel It Still.”

The G Period section performed “The World is a Ghetto,” “Take On Me,” “Afro-blue,” and “Pan Fried,” all with Williams.

“My students are so good, but I just don’t have enough time with them. But they are amazing because unlike the students who are in orchestra and band, they can’t practice at home. They learn all this music, which is not easy [to do] in class time. It kind of boggles my mind that they are able to do this,” Bates said.