Spanish students learn how to flamenco 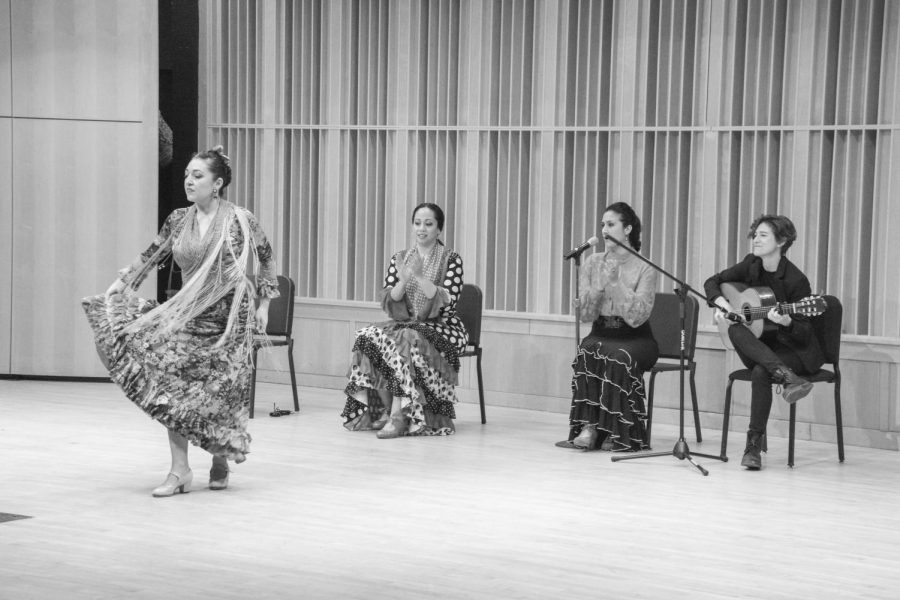 The sixth grade Spanish students had a hands-on experience with Spanish culture in a flamenco workshop last Monday that enhanced what they are learning about in the classroom.

Valerie Maté-Hunt, the Head of Middle School (MD) Language Department, organized the event. “The event took place because we wanted to expose our students to the culture of the Spanish language, and flamenco is one of the art works of Spain,” Maté-Hunt said.

Flamenco is a rhythmic form of dance that incorporates measured rhythms that continuously cycle with extravagant dancers to these beats. While some of it was planned, a lot of the performance was largely improvised on the spot. The workshop, featuring performers from the Xianix Barrera Flamenco Company, included a guitarist, a singer, and two dancers, who used their bodies, castanets, their shoes, and their voices to produce fun and vibrant sounds with many layers.

“After they performed, they explained the different movements they were doing, and they taught the kids how to clap correctly and how to move their feet in a certain rhythmic pattern,” Dean of the Class of 2025 Michelle Amilicia said. This made for an interactive experience that kept the kids engaged, and also allowed them to develop an emotional memory that they won’t forget, she said.

The performers used modern references to explain the dance moves like ‘pick up the Xbox controller’ for motioning to bend down, Elena Zu (6) said.

The climax of the event was when students had the opportunity to go onstage and perform each dance move they had been taught. “My favorite part was when we were tapping, as it was really interesting,” Brady Bu (6) said.

After everyone performed, the students were asked questions and quizzed on the history of flamenco by the performers. “Flamenco has such a rich history and dance, and it represents so much of the history of Spain,” Maté-Hunt said.

“I learned how flamenco evolved and how it spread through Spain and its culture,”  Olivia Coward (6) said.

Maté-Hunt believes this workshop is a great way to immerse the kids in a cultural experience beyond the classroom, she said. “Some students connect through the arts and this is just a really great way to expose them to a historic, artistic form of the language,” she said.

“This is what education is all about,” Amilicia said.

Coward thought that the workshop was not only a fun experience, but that it contributed to her understanding of Spanish and would help her in the classroom, she said.

Bu thought it was helpful to see what his class is learning about in real life, he said.

“This is the second year we did it, and it was really successful. The students responded really well to it,” Maté-Hunt said. The event was implemented one year ago, and the Spanish department plans to keep holding this event as long as it is still successful. Sophie Rukin (7) recalled her experience at the flamenco workshop last year as a really exciting and interesting experience, she said. There was no quizzing portion, though the rest was very similar, she said.

“We didn’t really understand flamenco until we saw it,” Rukin said.

In future years, Amilicia hopes to see the flamenco dancers teach the students an entire short dance that they will be able to perform together, she said. However, overall she was very happy with how the workshop went, she said.

“After all, what’s the point in learning Spanish if you don’t know the culture?” Bu said.