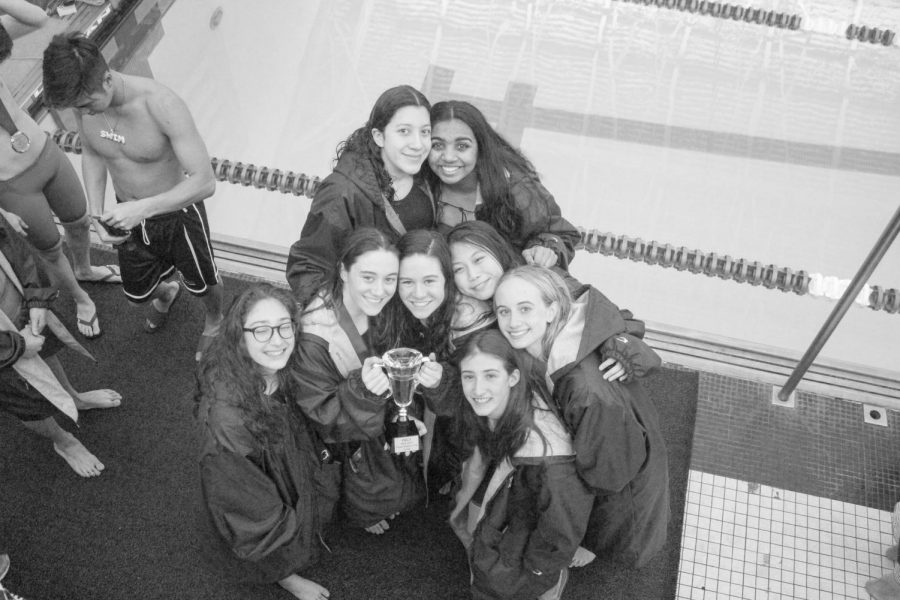 The Girls Varsity Swim Team finished their season undefeated for the first time in school history and earned second place in the Ivy League Championship behind rival Trinity. The team proudly fulfilled their reputation as the “swim cult”, dressing up in various outfits for team spirit, breaking multiple school records, and creating a tight-knit and loving family, co-Captain Eva Fortunato (12) said.

Girls Varsity Swim Coach Thatcher Woodley was similarly impressed with the Trinity meet. “The meet showed the true depth of our team this year because we lost some of the first events, but won the later events which allowed us to win the meet,” Woodley said.

Led by the seniors, the team has felt like more of a family than ever before, McKayla Widener (11) said.

During practices, some sets can be extremely grueling and students drop out before they are finished, Eva Fortunato said. “[But] we have tried to be good role models and a never-ending source of support and positivity for the underclassmen,” she said.

Wu said the seniors were an integral part of the team. “I felt motivated by the seniors because they would get the whole team hyped up during tiring sets,” Wu said.

“Although it’s very difficult to include everyone, the captains this year have done a really great job making sure everybody feels like they are a part of the family,” Widener said.

This camaraderie not only brought the swimmers closer together but also helped lead to the team’s success as people were inspired by each other, Elizabeth Fortunato said.

Elizabeth Fortunato said the coaches do a good job of making sure everyone swims together. “Normally, lanes are divided by speed, so swimmers who are more experienced tend to be on one side of the pool, while the less experienced on are on the other side,” she said. “[But] the team commonly merges lanes so older swimmers can help younger swimmers perfect their technique and act as mentors.”

“Since the lanes aren’t divided by age or gender it feels like one big family,” Jaden Sacks (9) said.

Perhaps one of the most unique aspects of the Girls Varsity Swim team is that they have a male counterpart, Fortunato said. “Having a guys team has created a really unique dynamic because the teams are always practicing together and attending meets together,” Eva Fortunato (12) said.

“The teams did great at the dual meets because the guys and girls constantly encouraged and cheered for each other,” Coach Michael Duffy said.

“The two teams have bounced off of each other and motivated each other through setting low times and attending each other’s meets,” Eva Fortunato said.

Reflecting on their swimming careers, the Fortunato sisters said that the Girls Varsity Swim Team has been their best experience at the school.

The team has been responsible for not just her most memorable high school experiences but has also given her a sense of community, motivating her to work hard, something that has helped her both in and out of the pool, Eva Fortunato said.

Woodley said he really enjoyed coaching the team for the first time. “I’m really proud of the team’s success this year and I’m really happy about how receptive they have been to having me as a new coach,” Woodley said.