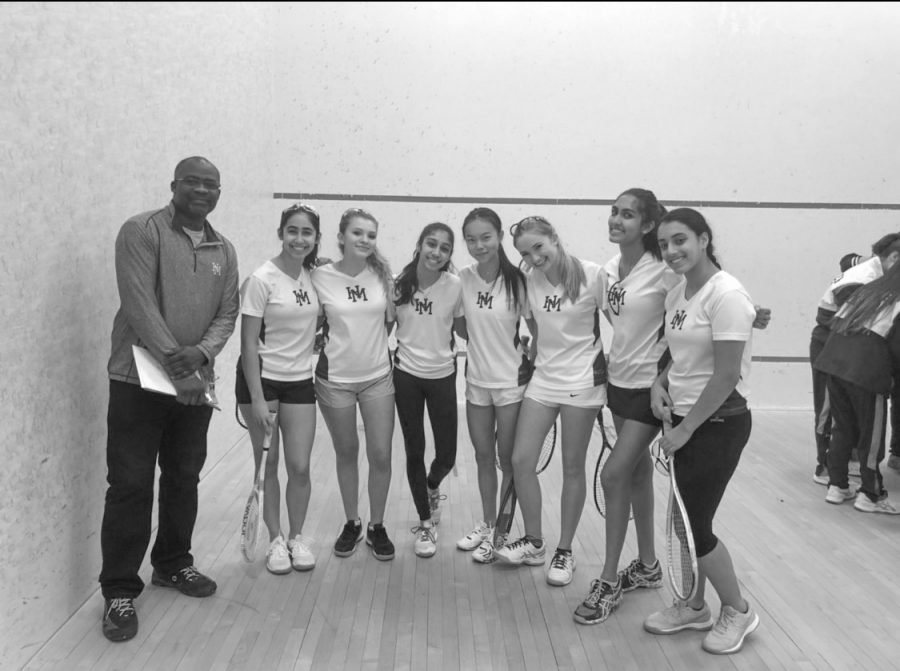 The Girls Varsity Squash Team recently finished their first season, with a winning record of six wins to five losses.

Notable highlights include reaching the semifinals at NYSAIS and placing fourth in their division at nationals.

The lack of players trying out accounted for the small size of the roster. “We could have more but we only had a few people that tried out,” Girls Varsity Squash Head Coach Olufemi Salako said.

Despite players’ varying levels of experience, teammates enjoyed playing with one another and spending time together, Alex Nathan (9) said.

“Some of us, such as myself, did not have a lot of experience playing squash,” Nathan said. “Other girls were very competitive players, and often they would play again after practice, which is crazy. Still, no matter what our experience level was, we all had a great time playing with each other.”

Unsure of what exactly to expect, the team goal was to compete at the highest level possible. “I think that we didn’t start the season with any specific goals, just to establish ourselves as a new team this year and be able to be competitive with other girls teams in the area,” Sanger said.

“We were very happy with how we did, as we placed above our seeding at both Nationals and NYSAIS and every single player achieved their individual goals,” Sanger said.

“This season was the first time Nora had ever picked up a squash racket, but she worked hard and by the end of the season she was consistently hitting accurate shots,” Kim said.

Kim credits Balidemaj for her positive energy and motivation.

“Nora was also constantly serving as a source of laughter for the team – always cheering everyone on from outside the court,” Kim said.

The teammates were satisfied with the results at the end of the season, and they enjoyed being a part of the school’s very first girls squash team, Balidemaj explained.

“The games went pretty well. We won some, we lost some but I think that we were all happy with the results, Balidemaj said. “We showed the school that we are a real team.”