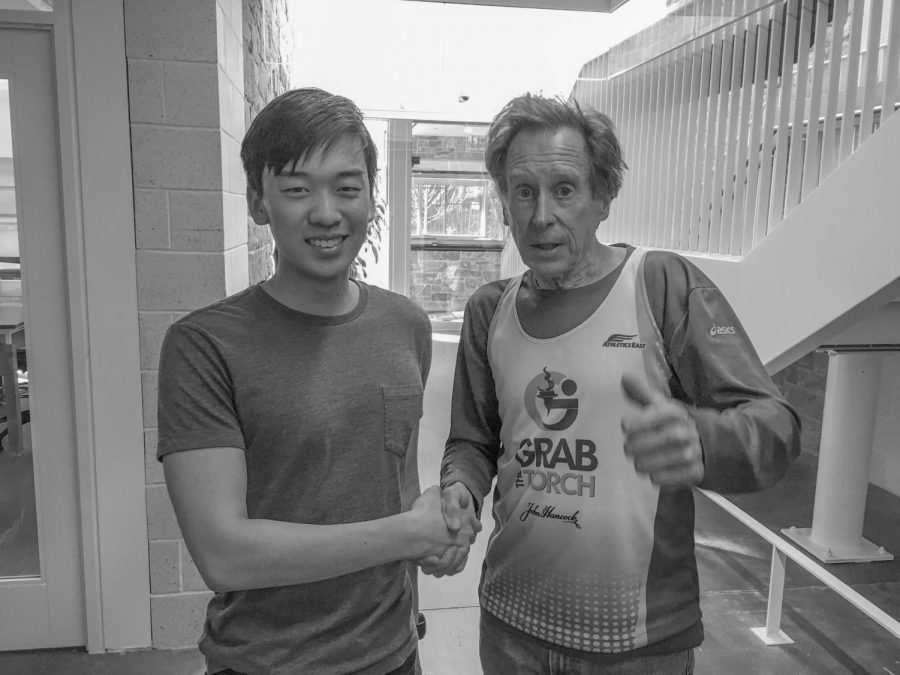 The Boys and Girls Varsity Track Teams began their seasons with an inspiring visit from the four time Boston Marathon winner Bill Rodgers.

“He provided inspiration by talking about how he not only worked hard to achieve his accomplishments, but enjoyed the process as well, which allowed him to reach his goals more efficiently,” Masa Shiki (11) said.

“Growing up in Boston, I had heard the name Mr. Boston Marathon, however, I never thought I would actually meet Bill Rodgers. I will never forget that moment,” Ethan Waggoner (9) said.

Rodgers also discussed how running can be an escape in high-pressure environments such as high school and can improve performance academically, he said. A piece of advice Rodgers gave the track teams was to “find something to take you away from the business of high school, whether it be a club or team,” he said.

Alexei Le (9) explained how Rodgers’ decision to run the Boston Marathon in college after stopping after high school showed that almost anyone with the right mindset can not only run a marathon, but win one, she said.

After the conversation with Rodgers ended, members of the team discussed their individual and team goals for the season.

Looking ahead to the Ivy League Championship and the New York State Association of Independent Schools meets, Eva Fortunato (12) wants to improve her time in the 100m hurdles and eventually break her personal record, she said.

“As a senior on the team, I hope to act as a leader and encourage the new members of the team to try new events and work hard to push themselves in practice and meets,” Eva said.

Liz Fortunato (12) shares a similar view of her final year on the team. “I aim to consistently improve my technique and time and have my best self out there on the track,” she said.

Aside from her personal aspirations, Liz Fortunato also stressed the importance of having a memorable and exciting season with her teammates, she said.

The track team as a whole looks forward to sprinting through the rest of a fun season, Shiki said.