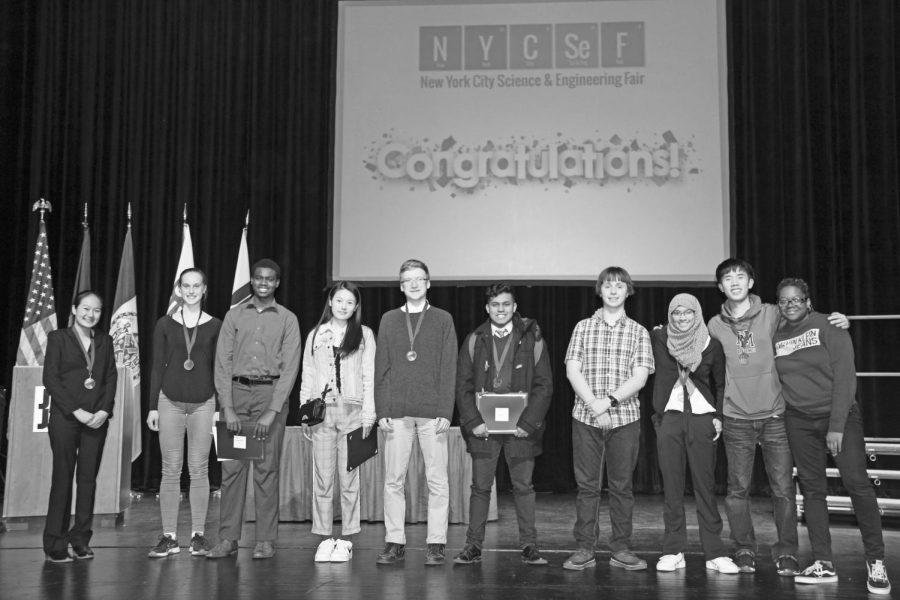 Sparks fly and tensions run high for the three students from the school whose projects were chosen for this year’s Intel International Science and Engineering Fair (ISEF), one of the nation’s most prestigious and selective science competitions.

According to George Epstein, Upper Division Science Research Coordinator, students must first qualify through their state competitions first before having to the opportunity to be selected to go to Intel ISEF. This year, Malhaar Agrawal (11), Brian Wu (11), and Richard Han (11) qualified from the New York City Science and Engineering Fair (NYCSEF).

Horace Mann was the second-most represented school for the New York representatives, with HM’s students’ projects’ consisting of 3 out of the 13 total from New York for the competition. The final round of Intel ISEF will occur from May 12 to May 17.

Depending on the student, Epstein had varying levels of involvement on their projects, he said. All of the students have been working outside of school with mentors, except for Richard Han, who is part of the Science Research Elective and received advice on his presentation and writing from Epstein.

Malhaar Agrawal (11), one of the finalists for Intel ISEF, centered his project around prostate cancer in African American men; specifically, the biological markers that make it so deadly.

“African Americans have double the incidence of prostate cancer and triple the mortality but the scientific community doesn’t really know why this is,” he said.

According to Agrawal, this lack of knowledge is in part because communities of color have a legacy of distress with health officials that stems from the inequality they face, he said. With his project, he intends to spread awareness regarding this crisis, especially to youth communities of color. Agrawal plans on publishing his paper in the upcoming months, which will hopefully shed more light on the subject in the scientific community, he said.

He first started his research when he created a non-profit called Health Disparity that educates students of color about various health issues, he said. For Agrawal, health disparities in minority communities is an issue that hits close to home, which inspired him to start this initiative.

His project included a 15-page paper. Additionally, Agrawal worked with a neurologist at his lab in SUNY Albany where the was able to conduct his research.

For Brian Wu (11), Intel ISEF is not a new competition. Last year, he found planets, brown dwarfs, and binary stars using the radial velocity method, which made him a finalist for Intel ISEF in 2018, he said.

Wu continued his research from this year by developing a new confirmation method to prove that the circumbinary planet he found is real, he said. According to Wu, a circumbinary planet is a planet that orbits around two stars. Only 23 had been discovered prior to his project, making them relatively rare, he said.

“In astronomy, the only thing you can really measure to determine the status of a planet is light, but there are a lot of things that can screw up light before it reaches us,” he said.

His method used N-body simulations and allowed for stella spectra to be created, which enabled one to input characteristics of a stellar system into his program to get the spectra, he said. “No one has created synthetic spectra in astronomy before,” he said. “Nor has anybody used the method I developed to confirm any planet.”

Similar to Agrawal, Richard Han (11) based his project on a specific type of cancer.

“I studied a bacteria called Fusobacterium nucleatum (F. nucleatum) and showed how it made esophageal cancer grow faster through a specific protein pathway,” he said. Han worked at his mother’s lab at Colombia University Medical Center, where he had continued the project from last year.

“The reason I chose this topic specifically was because the microbiology lab I work at was doing something very similar with this bacteria in colon cancer,” he said. “I wanted to do something different, and even though esophageal cancer is very deadly, not too many people have looked into it.”

All three of the students will be heading to Phoenix, Arizona, for Intel ISEF in the upcoming weeks.

Epstein is extremely proud of the students, and he is looking forward to the final round of Intel ISEF. He thinks that the lengths that the students went to accomplished these projects was extremely admirable, especially since they dealt with such difficult topics, he said.