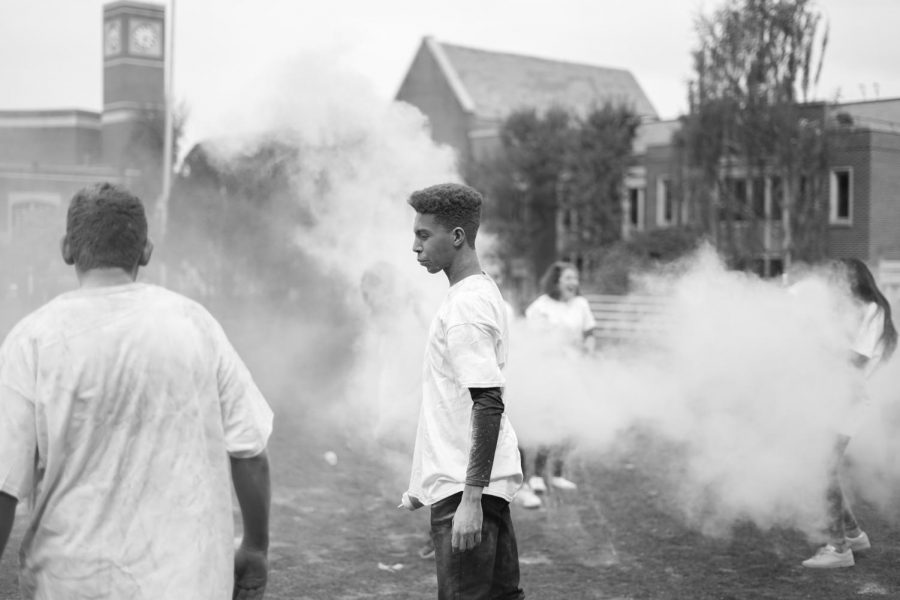 Students from all grades and many faiths came together to throw colorful powder at each other on Alumni Field on Monday, in the school’s second annual celebration of Holi, a Hindu festival commemorating the arrival of spring and the triumph of good over evil.

Student Body Presidents Janvi Kukreja (12) and Nader Granmayeh (12) organized the celebration with the help of the administration and maintenance, Granmayeh said.

They chose to host the festival this year because they felt that a festival in celebration of color and happiness was an excellent way to both have fun and expose students to different cultures, Kukreja said. “Holi celebrations at schools and universities are becoming more popular around the world, and we wanted to bring it here,” she said.

Many of the students who participated felt that the results were refreshing and engaging.

Myra Singh (9) has celebrated Holi in the past with family and friends, and she felt that the school’s celebration was representative of the festival’s general mood and atmosphere, she said.

“It’s part of my culture and I always have a lot of fun celebrating Holi,” Singh said. “This year it felt nostalgic since I haven’t celebrated Holi in a couple of years, and I thought it was really great to do so with my friends.”

AJ Walker, Jr. (9), who had never celebrated Holi before, also felt that it was entertaining, he said. “It was very chaotic, but that’s what made it enjoyable. A lot of my friends participated, and it was just a great time,” Walker said.

Other students, such as Ethan Waggoner (9) felt that the festival was not only an enjoyable bonding experience with friends, it was also a way to connect with other cultures, he said.

“My mom is from Nepal and did the same thing as a kid,” Waggoner said. “While I’m Christian, I thought that it was a great experience to be able to come home at the end of the day and talk to her about how much fun I had.”

Arya Patel (10) agrees that the event was enjoyable, but she would have liked it if more people had participated, she said. “I wished that there were more people there, so that more of the usual chaotic but nevertheless positive energy was present,” Patel said. She was one of the few students in tenth grade and above who participated.

However, there were concerns that the school’s event did not clearly convey the significance of the festivity.

“I feel like [Holi] was just a fun thing that people saw their friends doing and then joined in, but not a lot of people knew what it’s about,” Walker said.

Planning the celebration was a challenge for Kukreja and Granmayeh, as they had to coordinate with the administration to find an adequate date during which the weather was good and Alumni Field was available, the Student Body Presidents said. As a result, the celebration was delayed to late April, despite the fact that the traditional date of Holi fell in March this year, Granmayeh said.

Despite the scheduling problems and other issues, the Holi celebration was an enriching experience that Granmayeh hopes will become a tradition that is continued in the future, he said.