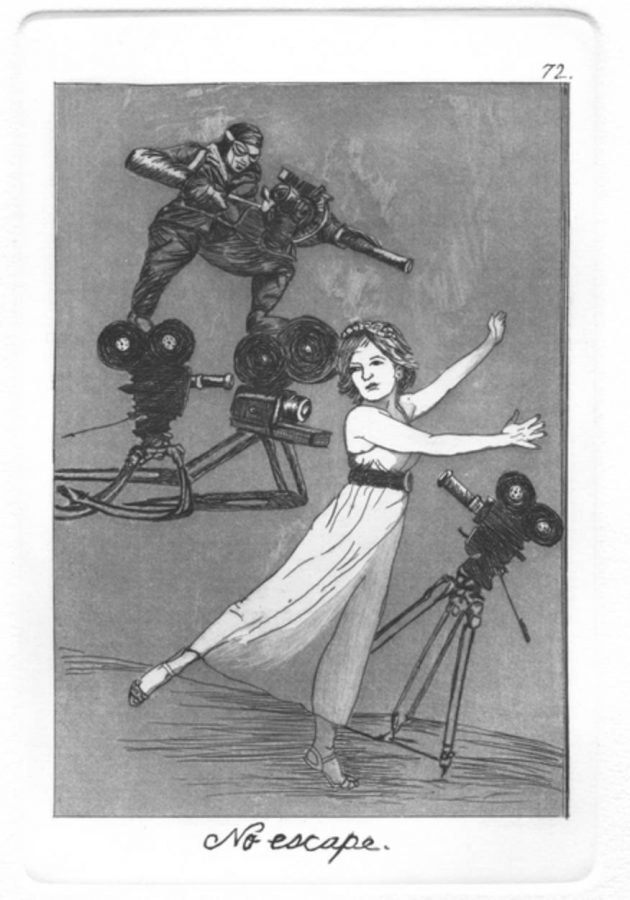 When walking through the Fisher Art Gallery, it is impossible not to notice the striking new display of student art created this summer, with contrasting colors and mediums all laid out deliberately. These works were arranged by Studio Arts Technician Emily Lombardo, who came to the school this year to use her professional artistic eye to create captivating exhibitions.

Lombardo started taking art classes as part of a gifted teenage program at Amherst College when she was 13 years old. Because of her strong portfolio, she graduated high school a year early and was accepted to the Massachusetts College of Art and Design in Boston.

During this time, Lombardo began studying sculpture with a focus on glass. However, while later completing her Masters of Fine Arts at Tufts University, she began focusing on paper techniques and specifically printmaking. Due to its ability to be reproduced, printbased art can be accessible to a wider range of social classes, Lombardo said. Rather than a painting, which has only one original copy and might be sold for upwards of a million dollars, printmaking creates several copies of the art, making it cheaper, and therefore, a more attainable art form, she said.

“Art that is print-based is a form of protest,” Lombardo said. “I tend to work on paper through ways of printmaking because it is associated with work that is politically motivated, one that breaks the social norms.”

Through her career, Lombardo incorporates political themes into her work. She is most proud of her project titled ‘The Caprichos,’ which has been acquired by the Museum of Fine Arts in Boston, the Boston Public Library, and the Academy Art Museum in Maryland, since its completion in 2016. It is in conversation with ‘Los Caprichos,’ a work by Francisco de Goya, a Spanish printmaker of the late 18th century. Lombardo reimagined Goya’s Caprichos through a contemporary, feminist lens.

The Academy Art Museum produced a show with Goya’s and Lombardo’s works next to each other. Goya’s work consists of a set of various images with text, printed in black and white, and displays the excess and abuse of power going on in Spain at the end of the Enlightenment. Goya is considered a master; he is said to be one of the founders of modern art, Lombardo said. Lombardo’s work is done in a similar style, but the subject matter examines the abuse of power in America today. S

he uses his style of work, but changes the political commentary to center on a queer and feminist perspective. “He is making commentary about his time, and I am taking his commentary and applying it to today. To be able to have my work side by side with that great master was an honor.”

Lombardo continues to create art that surrounds LGBTQ+ culture and history with a piece entitled ‘Life Lines.’ The exhibition was made up of a series of woodblocks, carved to create compelling images and scenes. Viewers were encouraged to take their own paper and create copies of the carved illustrations by pressing them against the works and rubbing them with chalk.

Woody Woodward, an iconic historical figure who frequently led Gay Pride Parades in the 1990s, is in one of the panels in the piece. A few of Woody’s friends visited the installation and were moved by it, Lombardo said. “They had an opportunity to talk about her life and their experience with her which made an even stronger connection for me,” Lombardo said. “I think that was one of the most important moments of my career.”

More recently, Lombardo has created a set of works entitled ‘Queer Monuments.’ This piece was inspired on a grant in Italy, during which she visited the city of Pietrasanta and discovered fields of marble that had been harvested from a nearby mountain. “I started imagining what it would be like if I had access to that stone- what I would do with it.”

“I was interested in making some sort of monument about the queer community that doesn’t actually physically exist, but is drawn only on paper from my imagination,” Lombardo said. She believes that it is wasteful for artists to work with mediums that require immense amounts of natural resources, she said. Instead of transporting these rocks to the United States, Lombardo decided to instead imagine the final product and make it on paper.

The finished works are a set of paintings of stone monuments that span through different times of day and have quotes written across them. ‘WORSHIP LOVE,’ one of the paintings, has a quote by writer Jeanette Winterson.

Winterson’s quote says,“I love you has always been a quotation. You did not say it first and neither did I, yet when you say it and when I say it, we speak like savages who have found three words and worship them.” The images are bright and memorable- the colors of the monument contrast with their plainer backgrounds, showing the importance of the sculptures Lombardo has imagined.

In the interest of shedding light on traditionally supressed voices, Lombardo chose to incorporate phrases by transgender activist and American author Leslie Feinberg and Winterson, she said. “I hope that people look at the quotations on the monuments and learn about those who wrote them.”

The political motivations in Lombardo’s work are geared towards younger people, she said. In ‘Queer Monuments,’ Lombardo represents marginalized narratives with the hope that younger generations of people can find their voice sooner by seeing themselves represented in popular culture.

With young people in mind, Lombardo decided to take her experience as an artist and an activist to a high school., aid Visual Arts Department Chair Anna Hetherington. “Emily Lombardo is an extraordinary artist and printmaker. She has so much experience being a studio manager; she has already been an incredible asset to the school community,”

Lombardo will continue to work in the studio, using her knowledge of art to contribute to the school’s success in the art department. “Educating students about art is the best way for me to give back what I have learned throughout the years,” Lombardo said.