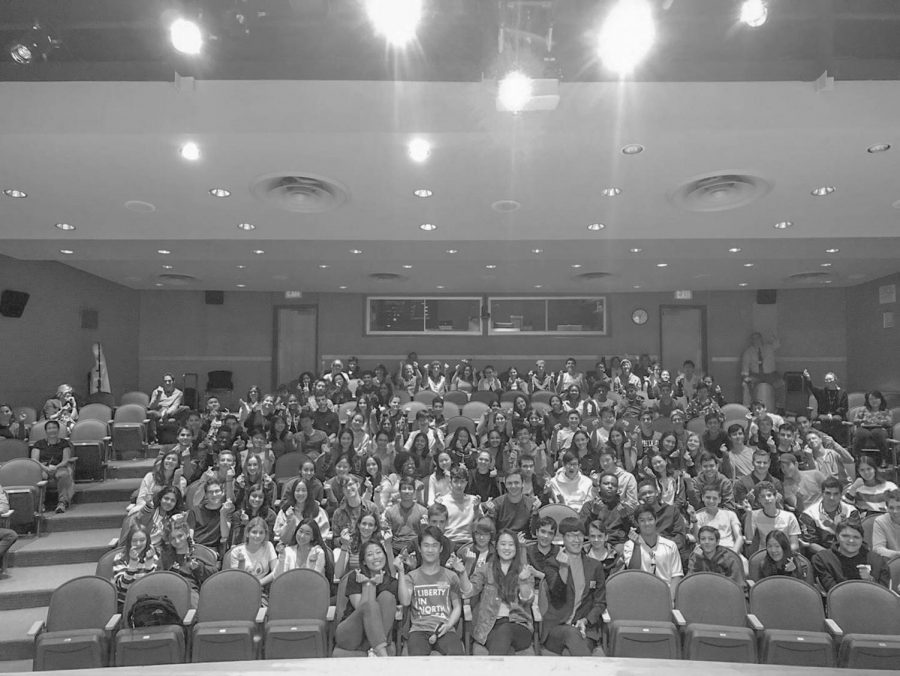 Members of the Liberty in North Korea (LiNK) international team came with three North Korean refugees to the school to educate students about the hardships North Korean citizens endure, and the hazards of attempting to escape to freedom through harrowing and emotional personal experience.

According to their website, LiNK’s mission statement is to “rescue refugees without cost or condition, and ensure their safety and dignity on their journey to freedom.” The organization is a non-for-profit and is funded by donations, advertising that it costs only $3000 to salvage the life of a North Korean person.

During the presentation, three former North Korean citizens discussed their experiences living in and escaping from North Korea.

“It was a really unique opportunity for me because most people will never get to hear the life story of a North Korean refugee,” Ari Salsberg (11) said. “It was difficult to listen to because this is the sad reality for so many people in North Korea.”

To Helena Kopans-Johnson (12), the only times she heard about North Korea was in newspaper headlines and from her Cold War history class, she said. “I had a common understanding about dictatorship and censorship, which I think people normally associate with North Korea,” she said. “But this was the first time I heard about the struggles the people within the country faced, and their stories brought out the human rights aspect that we don’t hear about.”

During the presentation, three former residents of North Korea told their deeply personal stories. One such speaker, Joy, moved many students to tears during her twenty-minute monologue. She spoke only Korean, but the translation on the screen next to her was enough to spark an intense emotional response.

After escaping North Korea, Joy was trapped in northern China by a broker and was sold into marriage, and she was eventually forced to carry a child that she later had to abandon when she fled China. She was eighteen years old.

“It was inspiring to hear someone go through those hardships and be able to share them with us,” Annabelle Xing (11) said. “We are very lucky to be able to hear these stories.”

Chris Ha (12), who speaks and understands Korean, noticed that when the refugees were taking questions from the audience, their answers weren’t directly translated from Korean to English, so some of the personality of the people from what they were saying was lost, he said. However, the presentation altered his perspective of North Korea overall, he said.

“When I think of North Korea, I usually think of impoverished nation where everyone is starving,” he said. “[But] hearing the refugees’ answer questions cleared some of these vague blanket statements I was told growing up.”

A second speaker, Jeongyol, managed to escape North Korea while attending an International Mathematical Olympiad in Hong Kong during his final year of high school. While he does not regret defecting from the country, leaving his parents behind was incredibly hard, and he hasn’t seen them since, he said.

“The refugees were college-aged kids that were only a few years older than us, which made the presentation more relatable,” Salsberg said. “I realized that these are just normal people like us, and it really changed my perspective about North Korea.”

One student who was able to talk to the refugees personally was Tae Kyu Lee (10), who was approached by Robin Ingram, Head of the Student Ambassador program, and was asked to lead the North Korean fellows around the school in the morning because he was fluent in Korean, he said. He was also able to attend the lunch discussion following the presentation, where the refugees discussed day to day life in North Korea in more depth, he said.

“A lot more information is spread from China into North Korea than I expected,” he said. “I learned that citizens [of North Korea] could watch news from China, but they mostly heard about disasters and bad events in the world, because North Korean leaders filter out other news to make the point that their own country is safe and better.”

Chloe Kim (12) organized the event, because she became invested in the humans rights issue of North Korean refugees after visiting Korea for the first time, she said. “I didn’t interact a lot with my Asian heritage until then,” she said. “But after visiting Korea, I became more interested, especially because I talked to my relatives about how my grandfather escaped North Korea when he was nine years old.”

Kim approached Dean of Students Michael Dalo with the idea of bringing LiNK to the school for a full Upper Division assembly, Dalo said. However, with the crowded schedule for fall assemblies, the administration decided to use the recital hall for the LiNK presentation, he said.

“I’m really happy that we were able to make the program happen, and there’s a possibility that we would want to have LinNK back to school at some point,” Dalo said.

After visiting, Kim watched a Ted Talk by Joseph Kim, a North Korean refugee who became a student in the United States, and later met him at an event where they discussed the difficulties of being a student with no financial support at all aside from a scholarship, she said.

“He told me that some days, he could only afford to eat one packet of instant noodles per day, because he did not have a support system in America,” she said. “He provided me with the sense of direction I needed for my activism through his stories.”

Kim went on to create the Bao Sei Foundation, a nonprofit to raise funds for students from North Korea, and through her networking she was able to talk to LiNK’s CEO Hannah Song about a LiNK presentation at the school.

So far, LiNK has successfully aided 1000 North Korean escapees, and provided each person not only with help coordinating their escape, but also with resettlement assistance. This aspect of the program includes education, living expenses, and career opportunities in the refugee’s new home.

There are many benefits for sharing the stories of North Korean refugees with students, LiNK development coordinator Sarah Kim said. “I believe that people who are in high school and college are in the best position to hear about these stories and how they can get involved, because they aren’t busy with a full-time job yet, so they can consider if this issue is something they want to pursue,” she said.

Overall, the event changed the perspectives of North Korea that students typically held throughout the school.

“The event gave me a new view of North Korea because it was about the culture and the people who live there, instead of the same narrative that we hear on the news,” Salsberg said.

“It was emotionally intense and so many people were touched by the stories,” Xing said. “It was really humbling for me because it made me aware of these issues that had seemed intangible, and it emphasizes how lucky we are.”

“I think Upper Division students were aware of the situation in North Korea through their history classes and the news, but it was never in their realities,” Dalo said. “To be able to talk to people around the same age made the situation much more real.”