Homefield Advantage: Pros and cons of playing at homecoming 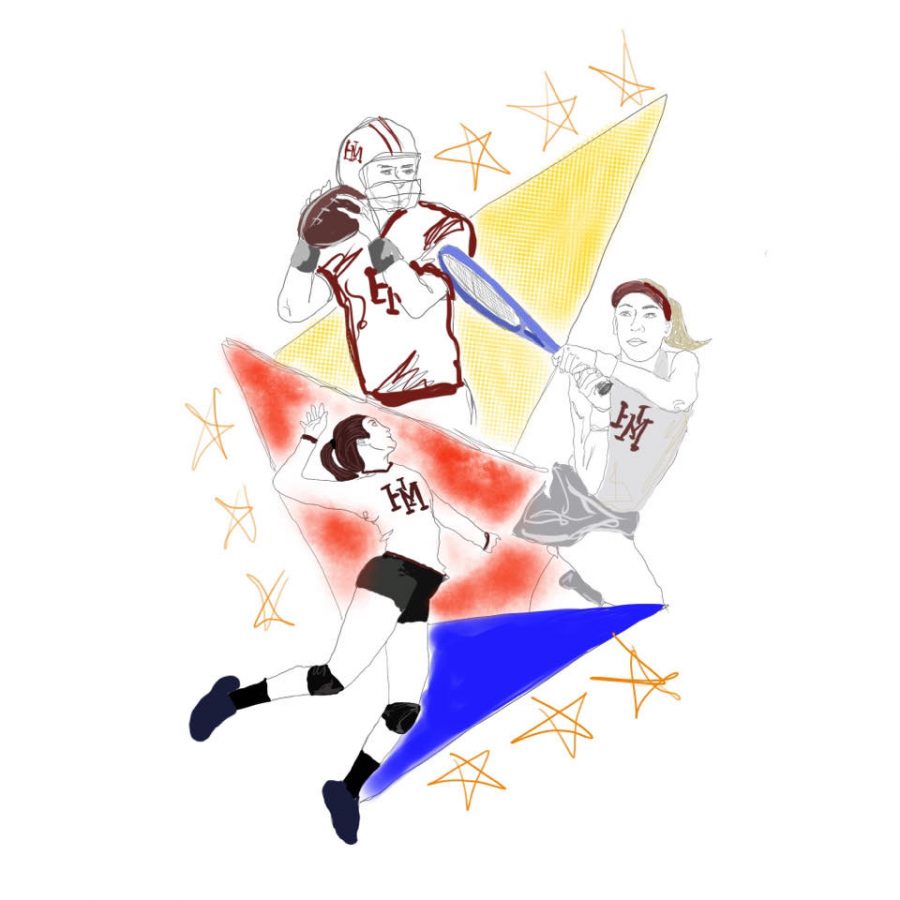 Year after year, crowds of students, teachers, faculty, and alumni venture to the school on a Saturday morning to support fall athletes. For the Lions, who are tasked with embodying the spirit of the school throughout the day, the event brings both adrenaline and intense pressure to succeed on the home field.

The homecoming game is the most important one of the year, for the Varsity Football team, especially since the team has been undefeated on homecoming since Captain Nick Potash (12) began high school, he said. “It’s our super bowl.”

In preparation for a rigorous game, the football players try to focus, not slack off, and eat well in the week leading up to homecoming, Jonas Jacobson (11) said.

For most sports, homecoming yields the greatest number of spectators compared to the rest of the season games. Jacobson said that the large audience puts a spotlight on every single player on Alumni Field. “Just thinking about it makes me happy…it’s like the world is surrounding you,” he said.

The football team channels the energy of the audience into the game by playing more aggressively, which has helped maintain a winning record for the team historically at homecoming, Jacobson said.

Though the large audience can make the players nervous at times, once the game begins, Potash said, “You just settle down and it becomes a normal football game.”

Even for teams who veer more off campus, spirits remain high. People all over the tri-state area attend Boys’ Cross Country races, located on Van Cortlandt Park, especially since the homecoming race is the Manhattan College race, the biggest of the season with hundreds of runners, Max Migdon (11) said.

Since the Girls’ Cross Country team regularly runs at Van Cortlandt Park, the location of homecoming provides a leg up for the Lions who can strategize and run on a familiar terrain, Catherine Mignone (10) said.

“Cross country is always about mindset, and on homecoming we’re always in a really good mindset to do well and succeed so we always want to push ourselves to go harder,” Mignone said.

However, last year, the Girls’ Cross Country team ran at 10 A.M., which made the amount of spectators a lot smaller than normal. Sareena Parikh (10) is anticipating a bigger audience this year due to race being at 3:45 P.M, she said.

Similarly, the Girls’ Varsity Tennis team did not attract many viewers besides parents last year due to the far location in Van Cortlandt Park, but will be playing at the newly renovated home courts this year, which could cause better gameplay and more spectators, Sofia Allinson (11) said.

Despite playing off of the main field, Field Hockey typically gets many spectators when playing on Four Acres, Abigail Morse (11) said. “The bleachers are totally full, and there’s always people standing along the rocks at the top. It’s crazy.”

The field hockey players use this positive energy during their game by hyping each other up during huddles, and high-fiving and providing encouragement throughout the game, Morse said.

At the same time, Field Hockey Captain Reina McNutt (12) also sees a potential downside of the large audiences. “If the game is not going the way that we want it to, it can be more difficult having to mentally cope with that and keep the energy up during the homecoming game.”

The Boys’ and Girls’ soccer teams alternate playing on Alumni Field and Four Acres. Although Chris Ha (12) prefers to be at the center of the event on Alumni Field, he is still excited to play this year at Four Acres due to the supportive audience, he said. Ha said that the crowds make the team play harder, while also adding extra pressure. “It’s like a two sided coin,” he said.

Captain of the Girls Volleyball Team Zoë Swift also felt similarly, but she said in her freshman year, winning the extra intense game caused a special moment for the team.“After we won, we all came onto the court and tackled each other and made a huge dogpile. It was a lot of love and intensity.”

Vivien Sweet (11), a member of the Girls Varsity Soccer team, remembers a similar experience from her sophomore year, she said. “The team had only scored eight goals the entire season, but the captain at the time, Lucy Rittmaster ’19, scored a corner kick. It was a really crazy goal because no one was expecting it, so the whole bench stormed the field.”

Since Water Polo plays at an indoor pool, it’s more difficult for spectators to just drop by and notice the game happening, as they often do with other sports, but the games still garner a large audience, Walker McCarthy (10) said.

Water Polo’s audience is expected to increase due to the new renovations of the pool, McCarthy said. “Instead of being in a cramped four lane pool we’re now in an eight lane pool which makes the atmosphere more exciting and attracts more people. It also allows us to play the sport the way that it is meant to be, with more space.”

After games end, spectators tend to approach team members to discuss results. “When it’s over, everyone comes up to you and you feel like a celebrity almost,” Jacobson said. “Those are the moments that you’ll never forget.”

In past games, Jacobson remembers the audience rushing up to congratulate and praise the team after successful games, he said. “They spend their entire afternoon watching me do something I dedicate countless hours to.”

However, these conversations can also have the opposite effect. Parikh said that once the runners return back to the school, the experience can be “nerve wracking” because many spectators will ask questions about race results.

Even apart from the actual day of homecoming itself, traditions and celebrations on individual teams and at the school make the entire week leading up to homecoming exciting.

One common tradition for many sports teams is to create posters to cheer on members of the team. The Field Hockey team hosts an annual picnic brunch before the game, where they create signs for every senior, McNutt said. At the actual game, the fans and JV members hold the signs while watching the game.

The tennis team holds a similar tradition with a team breakfast each year, Allinson said. Typically, a table is decked out with various breakfast foods including bagels and fruit.

The volleyball team also arrives at school hours before the game to host breakfast, Swift said. “Coming to school that early when everyone wears sweatpants and looks fresh out of bed to eat breakfast and spend time together is a really special experience…We make our posters, laugh, and listen to music for the whole morning.”

Though not a yearly tradition, last year, a marching band visited the school and came to the pool during Water Polo’s half time. “That had never happened at a swimming based event in my lifetime, and I’ve been swimming for a while,” McCarthy said.

“Homecoming at HM is one of the few days where sports are a big part of everyday life since HM isn’t a super sports-oriented school,” McCarthy said. “The administration, teachers, and upperclassmen foster a super fun environment that allows everybody to come together on a Saturday the way people don’t typically at HM.”