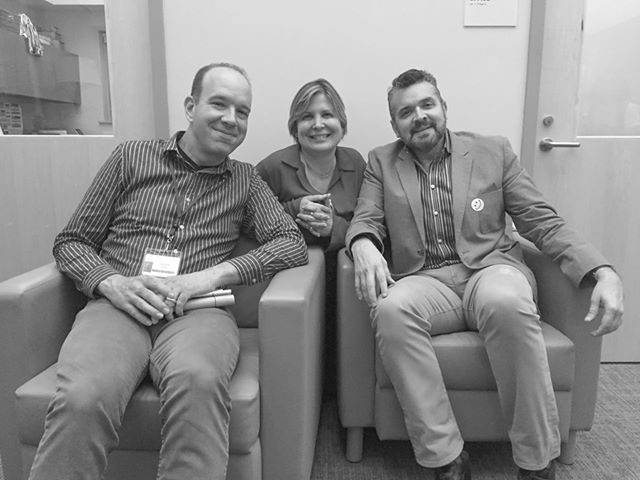 After launching their first meeting of the year, the Middle Division (MD) Gender and Sexuality Alliance (GSA) Club hopes to broaden students’ perspectives and expand their organization through discussion, communication, and fun opportunities.

The organization began in the fall of 2016, when a group of MD students sought to create a space for members of the LGBTQ+ community and their allies, MD English teacher and faculty advisor James Brink said. “UD [Upper Division] students told us that they really wanted support when they were middle schoolers,” he said. “We wanted to take their feedback into consideration and build something similar for today’s middle schoolers.”

Originally called “Rainbows and Friends,” the organization shifted to the name “GSA” in order to “clarify the purpose for building a support network,” psychologist and faculty advisor Dr. Christina Nichols said.

Since then, the club developed a routine of meeting every Thursday during I period to talk about common interests, issues in the LGBTQ+ community, and current events, Elise Kang (8), member of the club, said.
Generally, the environment is relaxed and laid back. “It feels just like talking to your friends after school,”  Camila Florencio (8), another club member, said.
Both Florencio and Kang joined the GSA due to a friend’s encouragement. “At first, I was kind of nervous about what it would be like because it’s a new space, but after I came here it was pretty cool so I thought I’d stay,” Kang said.

“Just coming to GSA has helped me grow as an ally because it reminds and emphasizes the importance of being aware of people’s identities, including, but not be limited to using the proper pronouns and being respectful of their space,” Kang said. “The things we do at GSA, they help me grasp a better idea of what kinds of experiences members of the LGBTQ+ community are going through every day.”

Florencio was able to make friends with people outside of her friend group, because of this “open environment,” she said. “It helped me understand that everyone’s experiences are different, whether as a member or an ally.”

“It is helping me figure out who I am, and hopefully helps others figure out who they are as well ,” Finn*, an anonymous student and another student in the group, said.
Sometimes, Brink said, students would come in with a topic or a news article in order to have the group focus in on a specific subject manner.

“Middle schoolers have lots of questions and ideas, specifically regarding topics like how gender, sexual orientation, and identity are showing up in our larger world,” Co-Director of the Office for Identity, Culture, and Institutional Equity (ICIE) John Gentile said.

Since middle schoolers are engaged with the LGBTQ+ community through the media, “having a space where they can process and engage in the critical analysis of that in developmentally and age appropriate ways is essential,” Gentile said.

Last year, the group had a several key opportunities to increase visibility and bond with each other. One of the biggest group activities that the group participated in was seeing “Be More Chill,”  a Broadway musical that features LGBTQ+ characters and themes. According to an article about the event in Volume 116 of The Record, the group chose the play not only due to its LGBTQ+ themes, but also the greater idea of marginalization, inclusion, and acceptance.
The group also tried to raise awareness last year by organizing a karaoke event and sponsoring a showing of the movie “Love, Simon” with cookies for attendees, Brink said.
This year, the organization will make announcements at assemblies and posted it on the student life website, Nichols said.

Though the group has been growing gradually over time, one of the biggest goals for the club in the upcoming year is to increase outreach to gain more members, Brink said. The club is aiming to have around six to twelve students at the average meeting.

Kang said that she hopes to see new members join in order to grow the club. “A lot of these members have been there since the beginning, and I haven’t seen anyone new join this club so far,” she said.

This year, Brink said that the club is planning to spread awareness and “have a presence at MD events” by sponsoring more activities within the MD, such as another karaoke event or collaboration with HM Lead.

Within the club, the advisors hope to bring in more specific discussion topics or current events for participants to dig deeper into LGBTQ+ issues, Brink said.
In addition, the group plans to continue “community building” activities such as potentially doing another theater trip.

Kang said at the first meeting the group discussed watching a new show in New Jersey. “If it works out, I really want to go, since I was invited to Be More Chill last year, but I had a conflict.”
In terms of discussion, the group is hoping to “go more in depth about issues concerning the LGBTQ+ community around the country and the world by focusing more on actual issues that we can talk about,” Finn* said.

“With more visibility and more information on these identities in the world, there’s more questions and opportunities for young people to stand more authentically in their truth and so we’re recreating space for them to feel safe and good to be able to do that,” Gentile said.