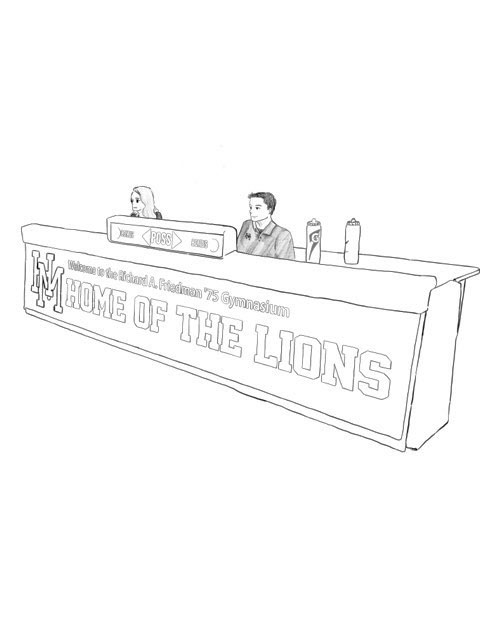 Though the athletes working tirelessly on the playing field are the undisputed stars, behind the scenes, managers help guide their teams to success.

The manager position begins with an in-school contract as well as meetings with the coach and the potential manager, in which they discuss the expectations for the job, Director of Athletics Robert Anunnziata said.

The job can be dated back to the 1906 Mannikin, which is the oldest one in the archives, Archivist Hillary Matlin said. Back then, the main responsibility of managers was to set the team’s schedule each season, she said.

“But though my bus-broken back may not wish to remember the pain and boredom of that time, if I’m being honest, something else in the cluttered rooms of my memory will remind me of how much I enjoyed those days, the locker room pranks, the tension of final seconds and the friendship within the team,” wrote Kenneth Pollack ‘84, the manager of the basketball team, in a 1984 issue of The Record.
Ultimately, no matter what year, managers are present to serve the team, Anunnziata said. “I think energy, spirit, loyalty, and a dedication to the work all are expected of them.”

A manager is in many ways more of a coach than a player because they are able to watch the game from a bird’s eye view Varsity Water Polo player Walker McCarthy (10) said. “We’re grateful for the perspective they can provide,” he said.
This year, Lauren Ho (10) is a new manager for the Varsity Water Polo team. Though it’s Ho’s first year as a manager, she’s been incredibly active, McCarthy said.

Ho’s most impactful change has been transforming the typically hand-written statistics sheet which contains a record of goals, steals, assists, blocks for the goalies, kickouts, and swim-offs into a Google Sheets form, he said. Because of the change, the entire team is now able to see how players are doing both as a collective unit and individually. “For example, we have a many goals, but the majority are not from assists, which shows that we need to set up and run more real plays,” McCarthy said.

To show their appreciation for Ho, the team is purchasing her a sweatshirt with ‘Manager of the Year 2019’ inscribed on the back. Jessica Thomas (12) is another first year manager, who decided to manage because she wanted to explore new opportunities as a senior with her friends. She chose Boys Varsity S8occer specifically to support her friends on the team. “I love every single part of it,” Thomas said. “It’s a great release from the stressful life of being a senior.”

Thomas manages along with Taussia Boadi (12) and Avani Khorana (9). Through managing, Thomas has learned how critical mindset is to performance. “I’ve seen that when you go into a game thinking you’ll lose; it’ll affect how you play,” she said. “I’ve learned [that] going into things having a positive attitude really makes a difference.”

Boadi sees her role as a manager as in between a coach and an athlete, she said. “The coaches make sure they’re playing well, but we have to make sure the players are actually okay.”

Working alongside with Thomas, Boadi tries to support the team as best she can with her spirit, Boadi said. “We cheer a lot, especially when they miss a goal, to try to make sure that we’re there for them.”

Anthony White (11), who manages Girls’ Junior Varsity Volleyball along with Mitchell Yu (11) and Ryan Rosenthal (11), supports the team by passing on lessons he’s learned about the sport, he said. Though different techniques are emphasized in girls and boys volleyball, due to the difference in the position of the players on the court, blocking, setting, spiking, and bumping are essential for both, he said.

Though White assists with drills during practices and referees during their games, he also works with members of the team during their free periods. “There are some people who have that drive to get better and want more practice, and I’m happy to work with them if they want,” he said.

However, not all teams enjoy the extra help a manager can provide. Remy Wu (12) and Joelle Maddan (10) are members of the Varsity Football and Cross Country teams, respectively, two teams without managers.

According to Coach Ron Beller, football doesn’t have managers because the tasks which would be assigned to a manager are fulfilled by the freshmen. “All of them come to every varsity game whether home or away and help our team out in any way they can,” he said. “It’s special to see such an invested class.”

However, both Wu and Maddan said that managers could benefit both of their teams. “A manager would be helpful to just be there for us and to act as some sort of external support on the sidelines,” Wu said.

Boadi has learned more about what it means to be a team player through her experience as a manager, in which she’s done her best to instill hope in players throughout their games, she said.