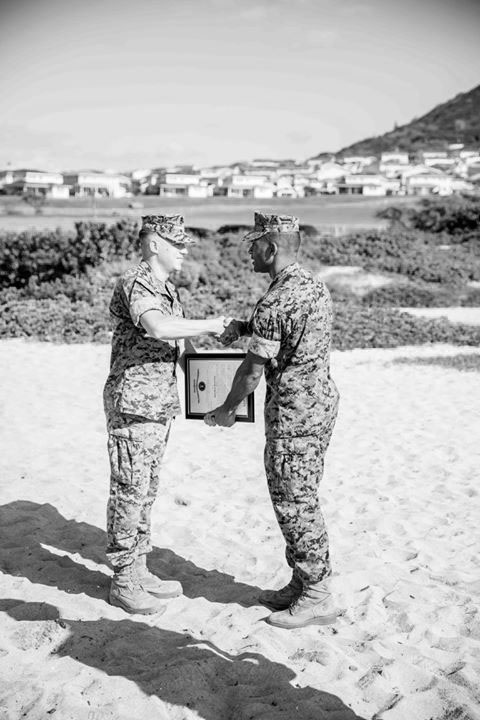 When former US Marine Corps Captain and Intelligence Officer Benjamin Jacobson ‘09 reflects on his time in the armed forces, he sees how his lessons from his service translate into the values he carries to this day.
After his graduation from the school, Jacobson attended the University of Chicago for his undergraduate degree. Upon graduating at age 22, he joined the military, and served on active duty from December 2013 to May 2018.
“I wanted to meet new people while also being exposed to another slice of America, one that would push me in various ways, help me explore my identity, while also doing my part to serve the country I live in,” Jacobson said. He also had a desire to find a competitive environment while still working in teams while trying to get out of his comfort zone and explore new options. “I learned at HM the value of tackling tough problems and engrossing yourself in them,” he said.
Although his parents didn’t initially expect for him to choose a military career, they still respected and supported his decision to go. “They raised me as an individual, who should approach every choice about my career with careful thought. They would never want to choose my path for me.”
Jacobson began with basic training at various bases across Virginia, which proved to be both mentally, emotionally, and physically challenging. He was stationed as an Intelligence Officer in 3d Radio Battalion based in Kaneohe Bay, Hawaii and deployed twice across the Pacific Ocean and Asia with the 31st Marine Corps Expeditionary Unit.
After finishing this year-long training, Jacobson’s resulting position included being designated as an Intelligence Officer. According to the Marine Corps official website, Intelligence Officers are in charge of accessing an enemy’s electronic systems to either disable communications or gather intel crucial for the success of the mission in a time of need.
Jacobson’s training included completing Officer Candidate School, where he was evaluated for the potential to lead the Marines and eventually earned the title of Marine officer. He then trained at the Basic School, where he learned the beginnings of professional knowledge and was evaluated on the leadership necessary to be a company grade officer with a particular emphasis on warfighting skills. Next, he attended the Signals Intelligence Officer Course, where he obtained his military occupational specialty (MOS) and learned how to lead intelligence Marines.
Jacobson held a number of billets, or roles, while being promoted from Second Lieutenant to Captain. Each billet, from platoon commander to executive officer had a corresponding set of responsibilities for Jacobson to lead his Marines. “As their leader, I was both a manager, and coach, I needed needed to make sure they were physically fit, technically proficient, and able to be employed effectively in supporting an infantry commander.”
Even to this day, Jacobson believes his time in the Marines developed several skills that he continues to incorporate into his life. “One of the biggest lessons was appreciating how hard it is to lead and how much I don’t actually know how to do that well,” Jacobson said.
Throughout the entire process, Jacobson thought a lot about who he was, who he wanted to be, and that process impacts the framework of decision making in his life. “I came in confident about my ability to lead, and I left in awe of the enormity of that task, and with a lot of respect for those that served with me.”
“Not only did I learn about myself and about finding my values, I learned about how different people from different backgrounds could each contribute something positive to the team,” he said. This understanding as well as his thankfulness for the dynamic work environment he was placed in taught him about the leadership and management of diverse people and the need to be humble when approaching others.
While Jacobson wanted to serve in the military, he said that those who are eager to give back to their country and their community do not have to join the military. “There are a lot of other ways to serve. Military is only one form of service and amongst all the teachers, parents, doctors, social workers, public defenders, policemen, firefighters, and artists, every form of service does its own part in creating the fabric of our country.”