Wrestling falls to Iona Prep in first meet of season 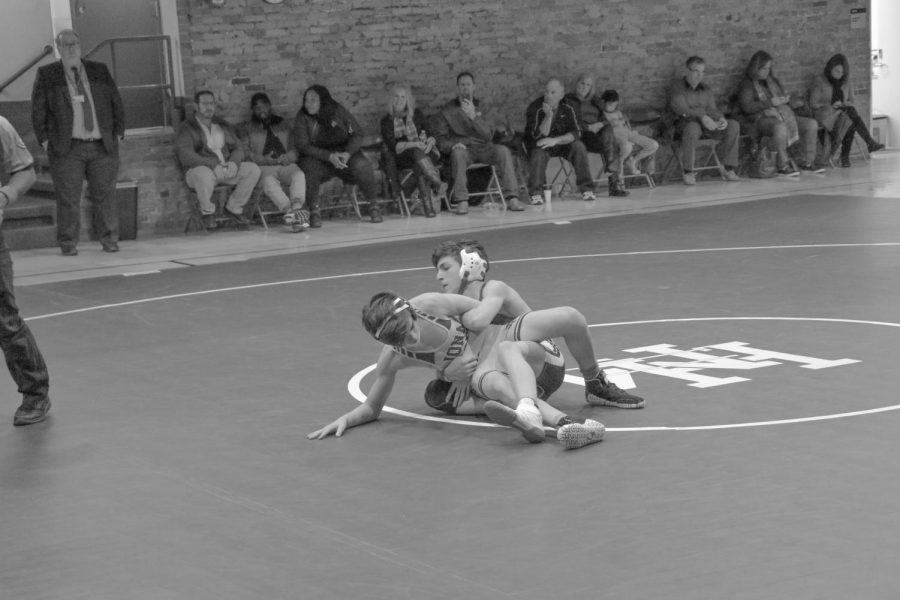 With three people injured and a team of around 20 students, half of which are underclassmen, the wrestling team began its season on Wednesday with a loss against Iona Prep, Elias Romero (10) said.
The team practiced consistently before the meet, but they were unable to defeat their opponents. The practices are challenging but rewarding, Romero said. “We all go through really tough practices together, and that makes stronger friends and a stronger team.”
“We worked a lot on technique and drilling, getting lots of repetition in. I was really impressed with the kids’ effort that they put in at practice,” Varsity Wrestling Head Coach Gregg Quilty said.
Co-Captain Liam Futterman (11) has been wrestling since seventh grade and trains at the Edge Wrestling Club outside of school. Even though the practices are hard, the team finds ways to have fun, he said. “The energy that people bring every day is my favorite part of the team.”
Going into the meet, the team was not sure what to expect, Romero said. “We wrestled them last year and it was a really close match, but we won by a few points, she said. The team knew that the school would be a really tough team, but they had worked really hard to prepare for the match,” he said
All of this year’s practices have led up to this meet, James Thomas (10) said. Since Iona Prep is a strong team, the meet against them is always important, Romero said. The significance of wrestling Iona Prep was magnified this year because it is the team’s first meet. “We focused on things that the Iona team doesn’t know how to defend against,” he said. “We made sure we knew how to defend from their strong attacks.”
Even though the outcome was not what the team had hoped, their practices paid off, Jhanae Ottey (10) said. “We reacted well to our opponents,” she said. “We played smart, instead of playing hard.”
Romero agreed, acknowledging that none of his teammates gave up their fights. Seeing his friends recover and continue to work hard kept everyone’s spirits up, he said.
Futterman and Jacob Schorsch (11) defeated their opponents. A major highlight of the game was when Schorsch won his match, Ottey said. “He almost lost, but he turned around at the right moment and pinned his opponent.”
Schorsch felt that the work he had put in at practice paid off immensely at the meet. “Even though the dual meet was a little disappointing, it’s an amazing feeling to know that the hard work you put in translates to success on the mat,” he said.
After this meet, the team is going to continue to practice and work hard, Ottey said. “We will work on general technique skills such as knowing where to put your weight and how to finish a move.”
“The team was a bit rusty because we had just gotten back from the break,” Romero said. At Friday’s meet, Romero hopes the team will be more prepared, so they can defeat their opponent.
“We need to work on countering takedowns and improving our stamina and conditioning,” Quilty said.
Thomas knows that Iona Prep is the best opposition the team will have this year, so there is no reason for the team to lose spirit, he said. “We need to stay resilient. He said looks tough, but it has always been tough.”