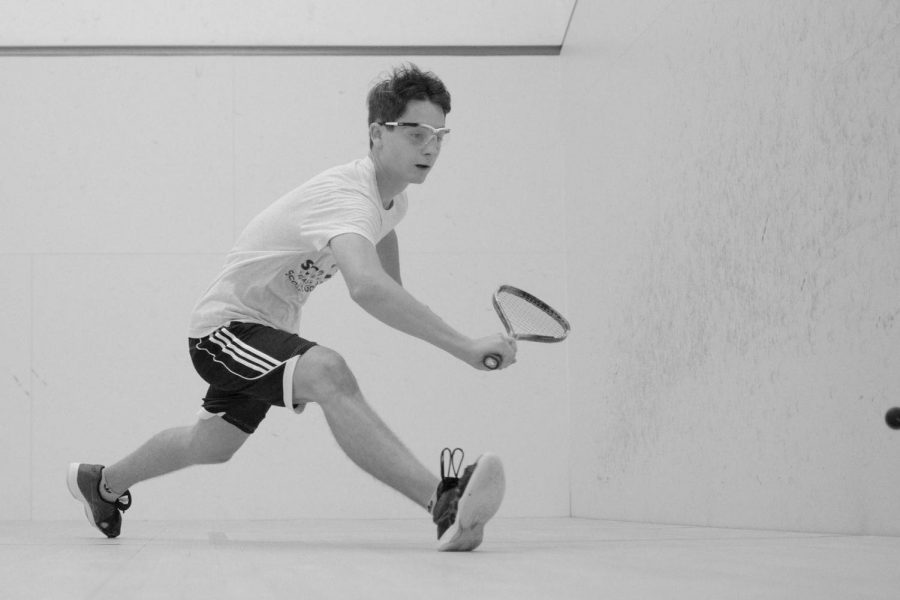 Peter Lehv’s (12) love of squash stemmed from his affinity for racket sports, he said. Over the course of his career, Lehv went from playing squash only a couple times a week in middle school to eventually becoming one of the top 75 players in the nation for his age group.
“I was playing a lot of tennis when I was younger, but squash was easier to go to,” Lehv said.
Lehv first started playing tournaments around the age of 11 or 12, but he didn’t take it too seriously, he said. “In high school, I started playing a lot more tournaments, playing five to six days a week, and I got my ranking up a lot higher,” Lehv said.
“Many players have dips in their progress, but Peter has been on a consistent upward trajectory,” Lehv’s mother Maria Danzilo P ‘20 said.
“Peter has been a tireless worker his entire varsity career,” Boys Varsity Squash Coach Ron Beller said. “He adjusted his schedule to fit both commitments in one day. Peter often comes to our school practice and then trains after our practice with his private coach.”
“Aside from being a hard worker, Lehv is also the ultimate team-player that keeps the mood very light,” Beller said. “He has the unique ability to laugh, make others laugh, and more importantly, he doesn’t take himself too seriously, which allows his teammates the platform to have fun and have a positive experience playing squash.”
Danzilo said it is very apparent that the team has great chemistry, and the members really support each other both on and off of the court, even when they joke about wanting to beat each other for higher positions on the ladder.
Similarly, Lehv gets competitive with his twin sister Clara, who is also nationally ranked, but in the end, they coach and support each other at tournaments, Danzilo said.
Another notable attribute of Lehv’s personality is that he brings focus to the team.
“Peter is very poised on the squash court,” Beller said. “You could never tell if he’s down four points or up four points.”
Squash can be a psychologically taxing game that causes some junior players to become very emotional and agitated from the pressure on the court, Danzilo said. These players may act out by throwing rackets and expressing anger at the referees or opponents, whereas Lehv is a player who “never loses his cool,” she said.
Regardless, matches can get very emotional, and Lehv’s favorite matches have been the ones that are the most suspenseful and that warrant a large amount of support from teammates, he said.
One of Lehv’s favorite matches was playing at nationals with the school team, where he was able to beat his opponent after a very long match, he said. One of the particularly long games ended in Lehv winning with a score of 20-18. Most games are typically played to 11 points.
“I was diving all over the court, and I bruised my arm during the match,” he said. “It was a really fun match; my teammates were cheering me on, especially in the fourth game when we had the really long tie break.”
As a result of his perseverance, Lehv’s mother has observed him emerge victorious in matches as an underdog, she said.
Lehv’s favorite memory playing a tournament outside of school involving him in rising above odds that were not in his favor, he said. The tournament was at Poly Prep, and students that Lehv coaches and tutors as a part of a program called CitySquash in the Bronx attended the match.
Lehv played against a player who was much better than him in the under 19’s age group, even though he was only 16 years old at the time. The students cheered him on the entire time and after another suspenseful and long match, Lehv was able to secure the win.
“It was my best victory at the time, and it was nice to have my City Squash family there,” Lehv said.
Lehv volunteers at CitySquash on the weekends, and for the past three summers, he has worked as a coach at the program’s squash summer camp.
Though he is out now for six weeks due to an arm injury, Lehv hopes to play at the Varsity Collegiate level in the future, he said.
“Peter has grown up to be a great person, and for that I am very proud of him,” Beller said. “He will excel in anything he puts his mind to.