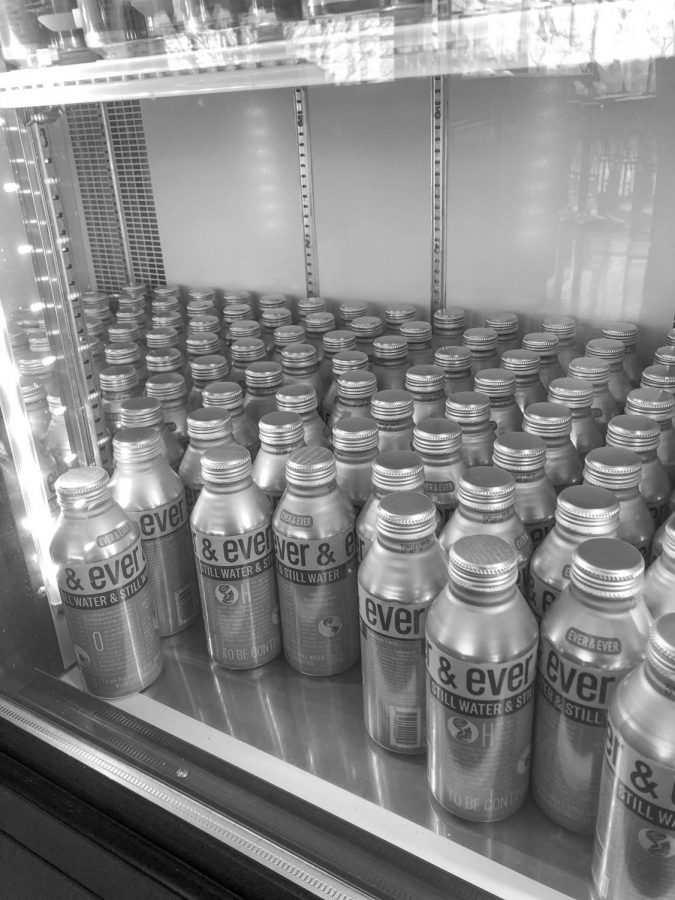 In an effort to improve upon school sustainability, beverages in the Cohen Dining Commons have switched from plastic to more easily recyclable metal containers. The change was not planned to happen until after the New Year, but it developed ahead of schedule due to student and faculty voices, Head of School Dr. Tom Kelly wrote in an email.
The change caught climate activist Natalie Sweet (11) by surprise. She was in the process of putting a proposal together for the school to switch to different water containers without any knowledge of the school’s decision. “And then this happened,” she said. “I’m glad this is acknowledging that plastic is a problem, but I really wish they consulted us.” After Sweet and members of Green HM conducted a lot of research, they concluded that paper water cartons might have been a better option, she said. Sweet along with other members of Green HM and the Community Council, has been working on this initiative for years.
For the past few months, Kelly asked students in his office to try out different types of bottled water, and the school began with the brand reported to have the most acceptable taste, he wrote.
The cafeteria switched to Ever & Ever aluminum bottles, a company that first started producing its water bottles in June 2019. According to the website, the cans are made from 70% recycled material, and Ever & Ever partners with the Lonely Whale Foundation to improve ocean quality around the globe.
The school plans to explore other options on the market in the coming months, eventually moving to water fountains or a permanent water dispenser inside the cafeteria, Kelly wrote. For now, the water bottles, which used to cost $1.00 each in their plastic form, sell for $1.25.
“They’re a little bit more expensive, which will hopefully incentivize students to bring their own, which would be a free option,” Belle Beyer (12) said.
The metal solution is far from perfect, Beyer said. It takes an incredible amount of energy to produce each bottle in a factory. Even though the bottles are made out of recycled material, the factories producing them mostly run on fossil fuels, she said. “Does it really get recycled? It’s kind of sketchy.” Only about 50 percent of aluminum cans and bottles get recycled.
Even so, the aluminum recycling rate is nearly double that of plastic containers. Additionally, aluminum can be recycled infinitely many times. On the other hand, plastic can only be recycled two to three times before it can no longer be used, according to National Geographic.
Indeed, due to a regulation change in China, a nation that recycles much of America’s products, more plastic is going directly to landfills, according to an article in the New York Times. In the year prior to the change, China imported 693 million metric tons of plastic and metal recyclables from the United States, but China has since globally only recycled 282 million metric tons, according to the Ministry of Commerce.
The effects that the changes could have on the student body are hard to predict, Paul Wang (12) said. It may remind students to bring their own bottles, or students may buy more, he said.
Beyer hopes students don’t see metal water bottles as the fix to climate change and single-use problems but instead a small step forward. Unfortunately, students may just buy even more disposable bottles because they think it’s a guilt-free solution, Beyer said.
Sweet said the switch to metal water bottles has the potential to make the school complacent. “Students may say ‘oh, we have this great solution. Now we’re done.’ But I don’t think that’s it,” she said. The climate fight does not just end with water bottles, but students need to be aware of their entire carbon footprint.
Hopefully, the marketing on the bottle will make people more mindful about sustainable choices, Wang said. “I think that this can branch off into other aspects of life and inspire people to do more things.”
Some students have found that the water doesn’t taste the same anymore, Bennett Neuwirth (10) said.
“When you press your lips on that weird aluminum, it’s like stale water, Oliver Lewis (10) said. “It doesn’t taste as fresh as the Aquafina.”
It is important to focus on sustainability education in the cafeteria as some students do not know much about the topic, Wang said. Even the simple act of teaching students what can be recycled is really important, he said. “There are a lot of simple steps that take education, so that is the next step.”
Having more discussions about why this is not the final solution is crucial, Sweet said. Ways to further the initiative might include taking away plastic utensils or having a place to drop off reusable plates in the library, she said.
Overall, Sweet said that switching simply to fountain drinks would have been a better option. The school was even rumored to switch to fountains over this past summer, Beyer said.
The changes would have needed renovations that the school was not yet ready to take on, Kelly wrote.
“The fountain drinks would be probably better, but at the same time, this is a step away from plastic which is good,” Beyer said. 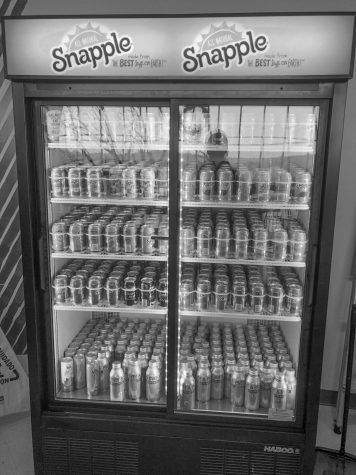