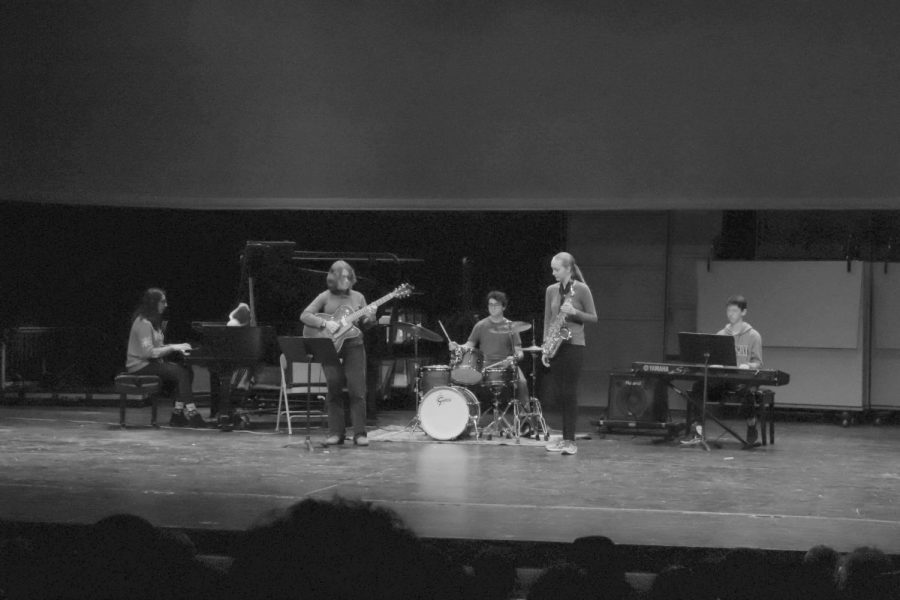 The house lights were dimmed, and electric candles were lit throughout the audience. To start this year’s final assembly on Tuesday, five students and two faculty members held candles onstage as they read a passage about the significance of this candle: “Here, at about this time, the world lights a candle to peace. It’s a universal gesture immune to politics.”
The first performance was a number from the Dance Performance class to Justin Bieber’s “Drummer Boy.” Other notable moments from the assembly included songs from three steel drums groups and an intense “Toss the Hoop on the Antlers” competition between the grades, which the seniors dramatically won in the last few seconds.
Jazz Combo performed a piece they arranged themselves, titled “Walking in a Sonny Wonderland.” The piece was a mash up of “Doxy” by Sonny Rollins and the holiday classic “Winter Wonderland,” the band’s drummer Alex Rosenblatt (10) said. “Holiday music is very uplifting; it’s so joyful,” he said.
Also in the spirit of the holidays, Genesis Maldonado ‘16 sang “Someday at Christmas” by Stevie Wonder. Bartels reached out to Maldonado last minute after other performers dropped out, Maldonado said. “I haven’t been on that stage in that setting for almost four years now, so it was interesting,” she said. “I don’t usually get too nervous about performances, but I was actually a little nervous then because I didn’t know most of the people in the audience.”
Charlotte Cebula (12) gave a senior reflection in which she discussed her personal experiences with sexism at the school. When asked to speak for the assembly, Cebula said that she immediately knew what she wanted to discuss. “Horace Mann has made great strides in incorporating discussions about gender, race, sexuality and class into our curriculum, but I think we could do more for our female and minority students,” Cebula said in her reflection. “I’ve come to the conclusion that it’s the job of the student body to make the change.”
The assembly ended with a wintery slideshow and singing of the alma mater, while students showed off their festive holiday sweaters onstage.