Trashketball: Horace Mann’s sublime pastime is back with a stinky vengeance 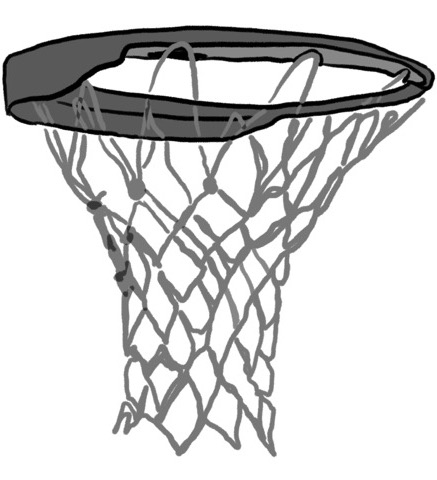 Players came prepared to tango and bruise egos with headbands, arm sleeves, and jerseys for the ceremonial second day of Trashketball action out on the hardwood. While players engaged in grueling battles on the court, spectators were in awe of the superhuman play.
Participants were chomping at the bit prior to start of the games. “I can’t wait to put the league on notice,” Garrett Hah (11) said. “They call me the bus driver… because I take the kids to school,” Hah said. Hah also advises opponents to tape their ankles before facing off against him.
Prior to play, Harry Winter (11) told his opponents to “take a seat because class is about to be in session.”
Trashketball is a glorious school tradition that dates back to the 1970s. Back in the day, there was disco, stagflation, and Trashketball, Commissioner David Berenson said. While stagflation and disco have dissipated, Trashketball has endured, he said.
Over the last 50 years, students, who aren’t members of actual basketball teams and spend most of their time studying, have put their (limited) basketball skills on display.
“Trashketball is 4-on-4 intramural basketball played poorly by upperclassmen and faculty,” Commissioner Berenson said. There is a great deal of trash-talking, hard fouling, airballing, and an astounding number of missed lay-ups.
On Monday, the ambiance of the gym was electric. “The energetic atmosphere produced an NBA-like game, a Knicks game, but still technically an NBA game,” Peter Arvanitis (11) said. “Even in the nosebleeds, energy radiated off the court.”
“We came out ready to battle,” Becca Rosenzweig (11) said. “We left our hearts out on the court, and we were determined to leave with a W,” she said.
The competitive environment fostered arguments between members of the same team. “I had a couple teammates that made some poor plays, and I had to let them know they needed to pick up their play,” Ryan Webb (11) said.
Some chants of “Trash…trash…trash” erupted between teammates after frequent airballs and turnovers.
Teams employed various different strategies and plays to increase their chances of winning. “We tried the give and go, the banana swirl, and basically anything the 73 win Warriors team did” Russo’s Raviolis Co-Captain Mark Fernandez (12) said.
Jacob Rosenzweig (12) made “skillful fouls and evaded foul calls by the referee,” he said.
For many of the faculty playing, Trashketball offers them a unique opportunity to pull out the kicks from the back of the closet. Dean Chidi Asoluka, in his first game back after a 15 year hiatus, posted one block, two baskets, one steal, and around 100 rebounds, he said. Following the bloodshed out on the court, Asoluka called his relatively stellar effort, “a light day” at the office.
While most of the involved faculty let the “kids” play, sometimes the big leaguers need to get out on the court. English Teacher Harry Bauld sat on the bench for most of his team’s game before coming in to close the door at the end. As NBA commentator Mark Jackson beautifully said during the 2019 NBA Finals, “There comes a time when the parents have to put the kids to sleep.” “Harry Bauld is the Mariano Rivera of Trasketball.” Fernandez said. “You just pray to god you aren’t put in a position where he comes into the game with a lead.”
In game action on Monday, Russo’s Raviolis defeated Shirt Pockets 11-4, and Athletic Potential, led by Jonas ‘the flagrant foul’ Jacobson (11), defeated Out of Bounce 11-3.
Some teams have lofty goals moving forward. “For our team, it’s championship or bust,” Fernandez said. “Anything less than a championship is a disappointing season.”
“I expect our team to compete down the stretch and make a great run in the playoffs,” Jacobson said. “We are going to leave our hearts and souls out on the court.”
Although Ari Salsberg (11) believes that his team might not possess the most athletic ability, he is optimistic about his teams chances to make deep playoff run using their smarts, he said.
Trashketball players have been motivated to frequently hit the gym to up their play. “After the loss Monday, I felt extra motivated to pump some iron and put up some shots prior to our next game,” Winter said.
Highly entertaining Trashketball games will continue to be played every I period in the gym.