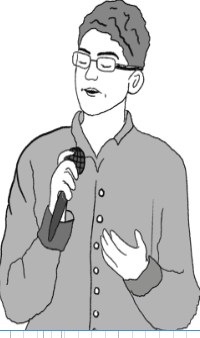 Spencer Kahn (12) performed his latest comedy act at the People’s Improv Theater in Chelsea last Friday. Kahn was asked to perform at the show by two college students, Moly Winiarsky and Mary Spedara, with whom he had interned for three years. The performance was the debut of their show called “Mommy Issues with Moly and Mary.”
Kahn performed a seven minute set of stand up comedy. “This show that I did last Friday included some of the jokes that I used at the opening assembly earlier this year, as well as some new material that I had written down on my phone,” Kahn said. “I write jokes on my phone every other week or so, but I have plenty of observations I put down whenever they pop into my head.”
“It was a fun, standard comedy show for adults,” Dylan Chin (12), who attended the performance, said. “Anyone who has had a conversation with him will know. He’s Spencer Kahn, you can just tell that he’s a funny guy. His show was just naturally funny.”
The comedy was more explicit than his typical school performance, Ashley Dai (12) said. “The most notable aspect of this show was Spencer’s new mature material, which I haven’t seen before in his school performances. It was fun seeing a more adult side of his comedy,” she said.
Kahn enjoyed the experience, Jayer Yang (12) said. “You could tell that he was having fun cracking jokes on stage, which made everything he was saying all the more energetic and enjoyable for the audience,” Yang said.
Kahn’s act differed from the rest for a number of reasons, Dai said. “I think what made Spencer stand out was his energy. The other comedians were all very relaxed and conversational, but Spencer was really able to engage the audience with sudden changes in volume or tone and by moving around the entire space,” Dai said. She was even in tears the whole show because she was laughing so hard, she said.
This was the first performance of “Mommy Issues,” so the crowd was tightly packed with family members and friends, Kahn said. Several other comedians came to watch the show, including two relatively well-known comics, Andre Sereno and Moss Perricone. The theater was small, which created an intimate atmosphere between the performers and the crowd, Kahn said.
“He got many laughs and the crowd was extremely engaged. It was definitely a good audience,” Chin said. Chin wasn’t surprised by this positive outcome, he said.
A good audience makes stand up much easier, Kahn said. “The audience was super responsive throughout the whole performance, so there were some opportunities for me to play off of the energy, which is always fun.”
Kahn draws his inspiration from his peers and from teachers at his comedy club, Kidz ‘N Comedy, where he has gone for around six years, he said. “I’m really thankful for my friends because they always do things that make me laugh, which I can write about it,” Khan said.
A lot of Kahn’s jokes are observational, Kahn said. He got the inspiration for this joke style from comedian Mike Birbiglia, he said.
One of Kahn’s observational jokes was about his family’s turbulent, ongoing relationship with White Castle, Yang said. “Spencer at a full-length show meant we got to see him have time to get more creative.”
“There are a lot of comedians who have a quick way of telling their jokes deadpan, so sometimes I write a lot of my jokes like that,” Kahn said. Deadpan is a form of dry humor where the delivery is blunt yet ironic.
“His delivery of his jokes was always very consistent and dry which made them even funnier,” Chin said.
Kahn has had an interest in comedy since he was eleven years old, he said. “I saw a show and thought ‘this looks like a lot of fun and not too hard’ so I signed up for a summer program,” he said. However, comedy proved more difficult than it seemed, he said. “I wasn’t too funny at the beginning, but with a lot of time, effort, and writing I got better and better.”
Comedy has been helpful for Kahn in many ways, he said. It has increased his confidence and allows him to add funny, interesting twists to essays that he writes for classes, he said. “It’s more than just a fun party trick,” he said.
In the future, Kahn hopes to continue his career in comedy through college. He will continue performing anytime he’s given the opportunity, he said.
Comedy can be for anyone, Kahn said. “If anybody who is reading this is interested in pursuing comedy, I suggest going for it. It’s a lot of fun and all it takes is a notebook and from there, you can write some jokes and see what happens.”