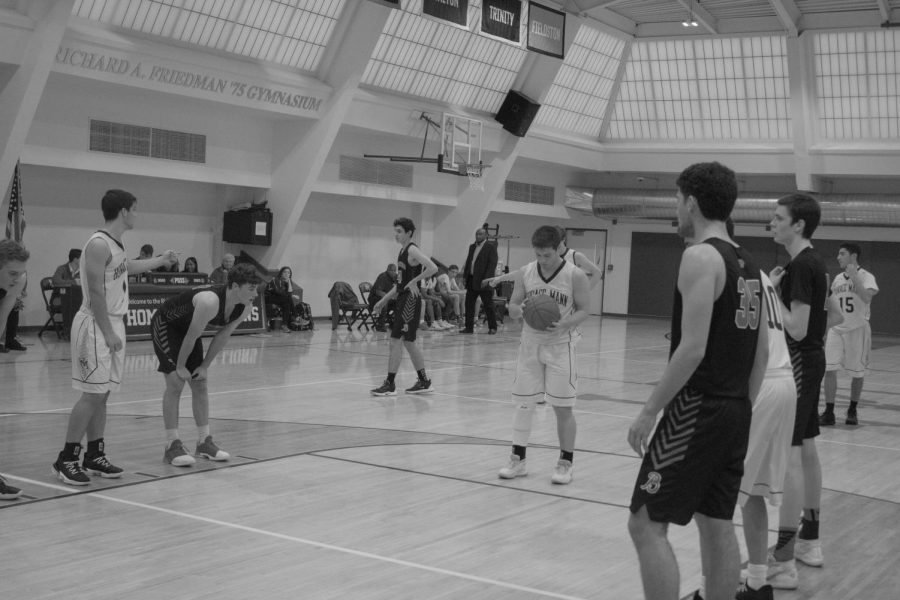 Boys Varsity Basketball lost to a last-second shot at Packer and beat Browning with missing players due to illnesses and injuries.
With less than fifteen seconds left during the Packer game, Robert Mantz (12) made a three-point shot to tie the game at 68 points. However, Packer quickly came back with a game-winning basket, and a final score of 70-68.
Team members attributed the loss to simple errors on both offense and defense. For example, the team often rushed to shoot the ball from difficult situations and when they had easy chances, failed to convert them into points, said guard Aillil Walsh (10). They also struggled with stopping the ball and preventing fast breaks, Avi Kapadia (11) said.
Jaden Kirshner (11) said that the team played really well in the last few minutes of the games. With many steals, the team was able to fight back, he said.
Even though the Lions lost, it was an important game to play because of the high level of competition, Ben Feldman (11) said. Packer is not a member of the Ivy League, so while the game counted towards the NYSAIS playoffs, the result did not impact the team’s league standings.
At the Browning game, the team made a lot of impressive plays, Feldman said, but communication on defense is the team’s biggest area for improvement. The final score of the game was 66-61 Lions.
The team played without two really strong players: Ben Chasin (11) and Walsh, Head Coach Tony Wright said. The circumstance allowed for some players who usually have less playing time to step up, he said.
Mantz said that his brother Eddie’s defense and tempo allowed the team to stay in control the whole time. “I think we are a totally different team when he’s not on the court in terms of our game speed and how much we can control the game,” Robert said.
Robert said that he has generally been really impressed with Walsh’s playing. Even though Walsh is not one of the five starters, he is one f the team’s leading scorers. “Especially as a sophomore we are all very excited for him,” Robert said.
This year, Wright replaced long-time Head Coach Tim Sullivan, and the dynamic of play is entirely different than last year, co-Captain Jack Blackman (12) said. The team’s best player Kelvin Smith left this year to attend boarding school, so the team has to rely more on team plays. “We don’t have the superstar in Kelvin that we had last year, so we work together better now,” he said. Last year, the team played to protect Smith and ensure that he could play most of every game, but now the coach puts in different groups of players.
Wright coaches with a different playing system than the players were used to, Wright said. The style includes more constant movement on the court and less set plays. “You’ve got to do a lot of thinking.” With a more motion-based offense, the team might never do the same play twice in one game, whereas set plays only allows a few options. “You can be very creative with it, too,” he said.
A few weeks before break, Feldman walked out of a game. Blackman said that Feldman left during halftime because the coaches were not giving him enough playing time during the game.
“My emotions got the best of me,” Feldman said. When leaving, Feldman said that he did not want to make a big issue out of it.
He left the game very subtly, Kirshner said. Kirshner did not notice until later because he was playing a lot that game and was pretty focused on the court, he said.
“I knew if I were able to leave the team I could spend more time doing other academics or clubs or focusing on other things,” Feldman said. While he loves basketball, it is not the end-game for him. Before leaving for good, Feldman wanted to make sure that the decision was well thought-through. After speaking with coaches and Director of Athletics Robert Annunziata, he decided to return to the team and finish out the season even though he did not feel as though it was the best decision for him. “It was me trying to deal with the frustration of my performance,” Feldman said.
Kirshner was also surprised at how little playing time Feldman had during the previous games, he said. “He is a very powerful player.”
Wright said that he plays athletes based on how hard they are working. “I don’t care if you have been a starter for the last two years. If someone is outworking you in practice, if someone else is showing up every day and doing the little things, they are going to play regardless of what the history has been,” he said.
Feldman was ultimately disappointed with communication from the coaches. “When you get frustrated, you make a decision,” he said. “So me walking out on the team might not have been the best decision in the moment, but I just wanted to take some time to reflect and see where I could move forward from there.”
Kapadia said that he is impressed with the coaching, especially considering that it is the head coach’s first year. Regardless of the difference of opinion regarding coaching, Kapadia said that the team is one cohesive unit this year.
The team has decreased in size by two members in the course of this year alone. “It was upsetting to see people go,” Blackman said. But the smaller group has allowed for team members to know their role on the court better, he said.
Kirshner said that athletes have left the team in the past, so the recent circumstances do not carry much weight on the team, and the best way for the team to move forward is to focus on playing, he said. “We know that it is a long season and everyone has personal reasons for leaving, and we just want to focus on the game and respect their decision.”