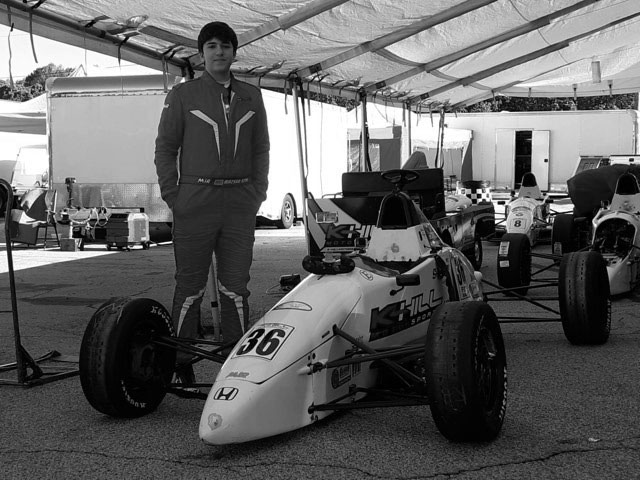 While most athletes at the school practice their sport on the field, track, or court, Mayzar Azmi (10) practices his sport in the comfort in his home—on a race car simulator, which he built himself out of aluminium extrusions.
Originally, Azmi’s passion for engineering sparked his interest in racing. “For me, the basis of cars—the technology and entrepreneurship—comes from racing,” he said. “I think if you want to be in the car industry, you have to know how to race cars because you have to know how it feels to drive at the absolute limit of grip in a car meant to do just that.”
Azmi started racing on his own around two years ago and decided to join a team not long after, he said. Though the team competes at meets together, each racer practices on their own. As of now, Azmi practices on Saturday and Sunday on his simulator for anywhere from three to eight hours a day. When he races, Azmi feels “excitement and passion,” he said.
According to Azmi, an athlete’s genetics doesn’t affect their speed as it may in other sports. “[Racing fast] comes from mostly experience, and yes, having 10 years of experience is better than having just two or even one, but if you want it badly enough, you can get it,” he said. “Personally, I think anyone can race, and I think anyone can win.”
This year, Azmi is racing at the Formula 1600 level, which is a step above Formula Four. The best level is Formula One, which is for professionals who “drop everything else in exchange for it,” he said. If drivers hope to reach Formula One, they must start practicing at age five, and in order to continue moving up the formula ladder, many drivers and their families even move to Europe. Though Azmi has never raced outside of the U.S., he dreams of one day competing at Nurburgring-Nordschleife in Germany.
As of now, Azmi has competed in four races against competitors typically aged 15 to 21, and he has had a podium—or top three—finish two times. Despite doubting that he could place beforehand, Azmi believes his second race was his best. “I managed to keep my head cool, and I eventually fought my way up to second place. I couldn’t believe it, but if it’s taught me anything, it’s that anxiety only holds you back, especially in a high-stakes situation,” Azmi said.
Upon arrival of any competition, Azmi always completes a few laps of warm-up to stay calm and learn the track. “Being able to slow down—not literally, but slow down your brain—that builds confidence,” he said.
After warming up, Azmi and his coach decide on what Azmi’s focus for the practice should be. “There’s probably a million things you could do to bring down your time, but the best way to do it is just think of three, maybe four, things you can do,” Azmi said. “It’s much easier to think about it in little, manageable parts. You don’t say go faster or slow down; those are really hard things to think about.” In the past, Azmi has focused on coming into turns faster or breaking later out of the turn, he said.
In order to achieve a personal best, a racer must go the fastest speed possible without crashing or running off of the track. “You have to learn how to reduce lap time while not overpushing,” he said. “You can’t get into the car and just pray for everything to be okay; you have to be extremely deliberate with your actions and fully conscious of every input you are making in order to lower lap times.”
Keeping this limit in mind, Azmi visualizes himself on the track prior to his race. He imagines the feeling of the brake pedal and the angle of the turn, he said.
“I also try to visualize other people,” Azmi said. “If they make a mistake, it’s good to know how to take advantage of it.” As an example, if someone near him slows down into a turn, Azmi will consider how he can compensate.
Steering clear of others is typically the correct decision, since the rest of the racers are usually too fast or too slow to pace with, which can be distracting, Azmi said. “You’re always trying to focus on your own lane,” he said. “By doing that, you’ll actually be able to race more competitively.”
Even if you do pace with other competitors, respecting them is of utmost importance, Azmi said. “You can’t just crash into other people; it’s literally illegal,” he said. “You’ll get disqualified. You have to be really smart and really careful, but you also have to win.”
But Azmi has learned much more from racing than sportsmanship, he said. “I can focus better for longer periods of time, I can manage my anxiety better, I can manage competitiveness and frustration better, I can make decisions faster, and, best of all, I can drive cars really well now,” he said. “Racing has helped me in so many ways, I can’t even list them all.”
Next year, Azmi may consider stepping up to a higher series, though he knows it will be difficult, he said. “Racing is an art. It takes a lot of time and a lot of practice, but I love it.”