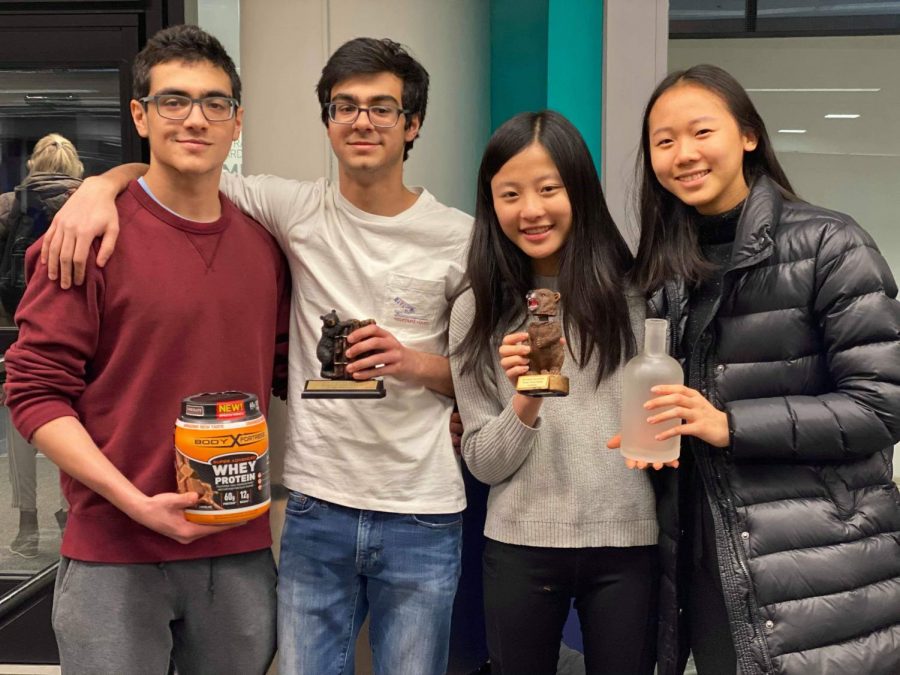 During the first weekend of winter break, ten members of the school’s public forum debate team showed off their skills at the 57th annual John Edie Debate Tournament hosted by the Blake School in Minneapolis.
“The tournament was a success overall,” Richard He ‘19, who attended the tournament as a judge, said. The team performed the best out of all the events they’ve attended this year, he said.
The team’s main goal throughout the competition was to advance as far as possible in order to receive a bid. Depending on their difficulty, tournaments have certain elimination rounds that debaters must win in order to receive a bid. Blake is an octofinals bid, which is considered to be the largest and most competitive type of bid tournament, Emily Shi (11) said.
Debaters aim to collect two bids during the season in hopes of qualifying for the Tournament Of Champions in April, considered to be among the most prestigious of debate tournaments, Sasha Snyder (11) said.
Partners Taimur Moolji (12) and Saif Moolji (12), co-Presidents of the debate team, advanced to the quarterfinals and received their second bid. In addition, partners Anabelle Xing (11) and Shi reached octofinals and earned their first bid.
“It’s a big accomplishment, especially at a national tournament where the competition is really good,” Snyder said.
The team traveled with their coach, Amala Karri, a student from George Washington University and former president of the Hunter College High School debate team, Leyli Granmayeh (11) said. “She was a really successful and inspiring public forum debater on the national circuit and became good friends with the HM debate team,” Xing said.
Karri usually helps coach rounds by providing crucial feedback and by thinking of in-round strategies, Xing said.
Karri attends rounds with different partners and gives advice or explain arguments after they were over, Shi said. “Everything she told us, we implemented in the next rounds to do better.”
Even though He attended as a judge, his debate experience was valuable to the team. Since he was the research director on the debate team last year, his familiarity with the debaters who attended the tournament provided the team with insightful knowledge and guidance, Snyder said. Though He came to the tournament to be a judge, he also helped the team research their topics and provided moral support, Shi said.
The tournament was a change of pace for the debaters. “Usually schools or colleges host the tournaments, and in those cases, our rounds will take place within classrooms, but this tournament was held in a hotel and rounds took place in hotel rooms and conference rooms,” Snyder said.
Furthermore, the team normally attends tournaments in the Northeast with mostly east coast attendees, but at Blake, there were over a hundred other debaters, many of them from the west coast, Granmayeh said.
These west coast debaters had a faster and more technical debating style than is typical. However, since the team had previously come across certain east coast teams with the same style, the faster-paced rounds were not too much of a challenge, Xing said.
Most of the judges at Blake were former debaters or debate judges, a change from the high concentration of parent judges the team has grown accustomed to on the east coast. “It’s less about sounding convincing and more about following rules in order to win the round. You have to adapt a little,” Granmayeh said.
The judges especially disliked paraphrasing evidence, something that the team used frequently, so they instead read directly from their evidence. Making that shift was challenging, Granmayeh said.
Since the tournament occurred right after a major testing week, the team was not able to do as much preparation beforehand as they would have liked. Instead, they did most of their preparation on the flight and between debate rounds during the tournament. In order to compensate for their lack of preparation, He helped them research prior to the rounds, Granmayeh said.
Though this tournament was in December, the attendees were debating with the January topic, “Should the US government end sanctions on Venezuela?” which was released two weeks before the debate. They felt the decision would give them a strong advantage for their two upcoming tournaments in January, Snyder said.
Aside from debating, the team enjoyed the time they spent together. The long trip to get to the tournament gave them a chance to bond outside of school and come together as a team, co-President Shay Soodak (12) said.
Even though the team just recently attended Blake, their sixth tournament of the year, they already have their eyes set on the future. The team plans to attend seven more tournaments, most of which will be during January and February, Granmayeh said.