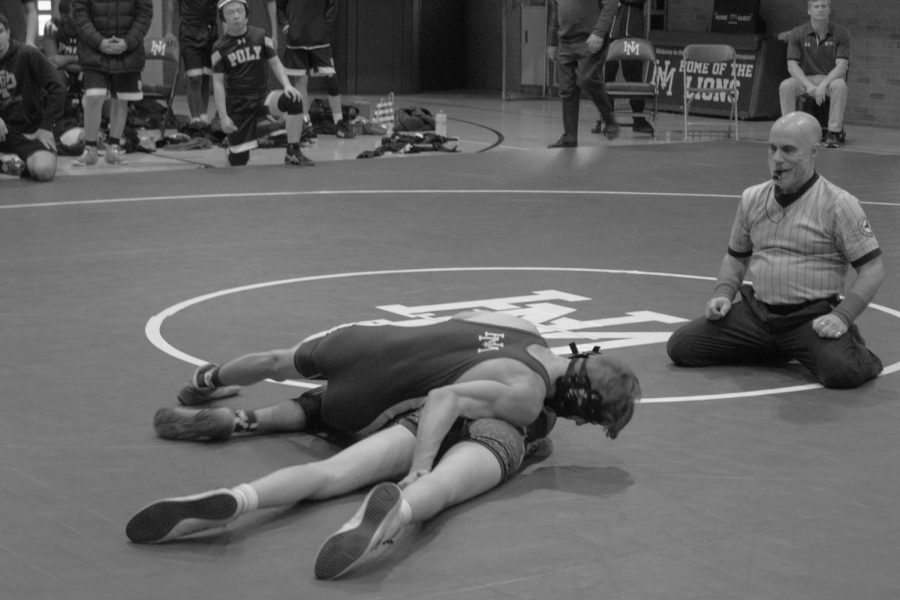 Despite achieving one of their best performances of the season on Wednesday, the Varsity Wrestling Team lost to Poly Prep on a decision based on technical criteria – a rare event that has not occurred in four years.
Since the Lions lacked wrestlers to fill one weight class, Poly received an automatic forfeit for one match, earning them six points and bringing the score to a 31-31 tie. In such cases, the referee goes down a list of tiebreaker criteria, and declares the win based on which team fulfills the earliest criteria listed. Even though the Lions earned more points per match than Poly, the first criterion stated that teams would win meets based on the number of matches won, which Poly technically achieved because of the forfeit.
“We definitely outperformed Poly Prep at this meet,” co-Captain Bernard von Simson said. “It was a disappointment, but I’m not as upset as [I would have been] if we had lost by traditional means.”
After Poly began with a lead after the first match, Jacob Schorsch (11) pinned his opponent in less than 10 seconds, earning six points and bringing the score to 12-9 lead for the Lions.
This match began a winning streak for the lions, bringing the score to 39-18 advantage for the Lions by the time that James (JT) Thomas (10) defeated his opponent by pinning him with only his upper body.
Matches throughout the latter half of the meet became increasingly longer and closer, while simultaneously growing the camaraderie and spirit in the room.
The winning title came down to the last period of the longest match yet. During the last match, where Harry Lowe (9) and his opponent both attempted to pin each other numerous times, each team stood to intensely cheer for each side and offer advice to the wrestlers.
Frankie Dogramaci (9), a spectator, was excited to see how supportive the schools were of their teammates, she said.
Even during practice, aside from simply exercising harder, the team focused more on prioritizing team spirit through chants and words of encouragement, co-Captain Liam Futterman (11) said.
In spite of the unfortunate results of the meet, von Simson remains hopeful for the team’s ability to beat Poly Prep at the Ivy League Wrestling Tournament, he said. “There were really strong movements of the team that I think showed Poly Prep that we were just as good as we were last year when we beat them.”
Poly Prep has always been the team’s biggest rival, who Schorsch considers the second-best team in the Ivy School Preparatory league after the Lions, he said. In the early 2000s, the school often beat Poly at wrestling, but with Poly’s recent success, the rivalry has grown bigger.
In practices, Von Simson aims to continue working on conditioning and technique in order to achieve the team goals to win the Ivy League Tournament and the New York State Association of Independent Schools (NYSAIS) Tournament, or the United States Championship.
The Lions have another change to defeat Poly Prep at the NYSAIS meet, Coach Gregg Quilty said. “[The] loss hopefully will motivate them to come back and beat them at the end of the year.”
Prior to this tournament, the team had an 8-1 record with only one loss against Iona Prep in their first meet of the season.
The Lions are the only team in the Ivy Preparatory School League that practices more recent moves due to Quilty’s expertise, which gives them a unique leg up against their opponents, Thomas said. “You’d be surprised how much it helps us at tournaments.”
These techniques proved helpful in the meet against Poly Prep, when multiple wrestlers used these moves to earn six points through pinning their opponents.
Some of these technical moves include upper body throws, and leg riding, when a wrestler places their legs through their opponent’s legs from a top position, Thomas said.
The Lions are specifically good at leg-riding, Liam Futterman said. “That’s kind of what we’re known for and all of the teams know that, but they can’t really defend against it because we’re so good at it,” Futterman said.
The disappointing results of the meet this Wednesday have inspired the team to continue to train as hard as they did before to reach their eventual goal of Ivy League and NYSAIS champions, Von Simson said.