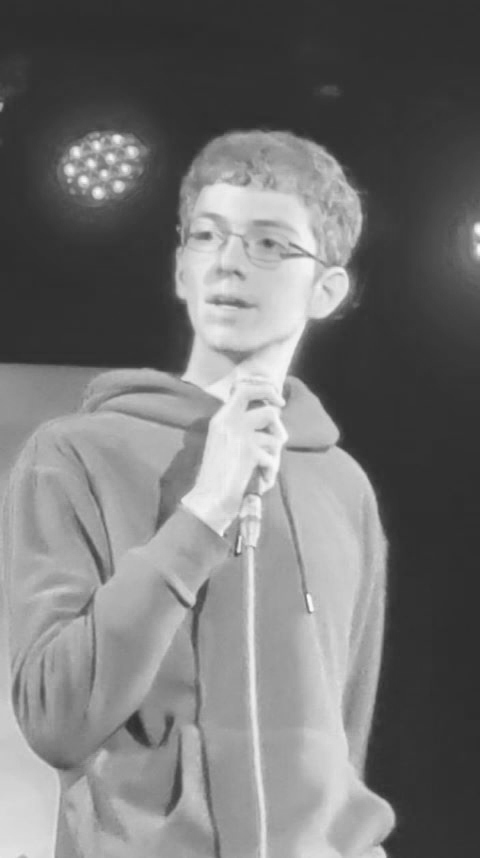 Spencer Kahn (12), one of three students enrolled in theater teacher Haila VanHentenryck’s Acting for the Camera class, shared a monologue titled “It Just Doesn’t Matter” from the movie Meatballs.
In collaboration with Jordan Rathus’ Filmmaking II class, Kahn and his classmates, Dylan Chin (12) and Wilder Harwood (12), each chose a monologue from a movie they liked that the Filmmaking II students then filmed and directed, Kahn said. The Filmmaking II students had total agency over lighting, physical direction, and camera movement, Kahn also said.
“People were talking about it after the assembly– it even came up in a class discussion,” Ari Salsberg (11) said.
The audience laughed amusedly as Kahn repeated the phrase “it just doesn’t matter” with increasing enthusiasm, Salsberg said.
Kahn began acting at a young age, and when other teenagers in a stand-up show in 2013 sparked his interest in comedy, he decided to give it a try.
By practicing on his own and taking classes in stand-up, Kahn was able to develop his comedy into what it is today and is glad to share his work with the rest of the school, he said.
Though there was a small screening of the three films for a group of around 15 students and faculty before winter break, Kahn is glad that more people could see the fruits of their labor in the assembly, he said.
“[The assembly] was a great way to showcase what we work on in this class,” Kahn said. A fan of student showcases with live performances, Kahn also believes pre-recorded films like the ones from his class provide a more “professional viewing experience.”