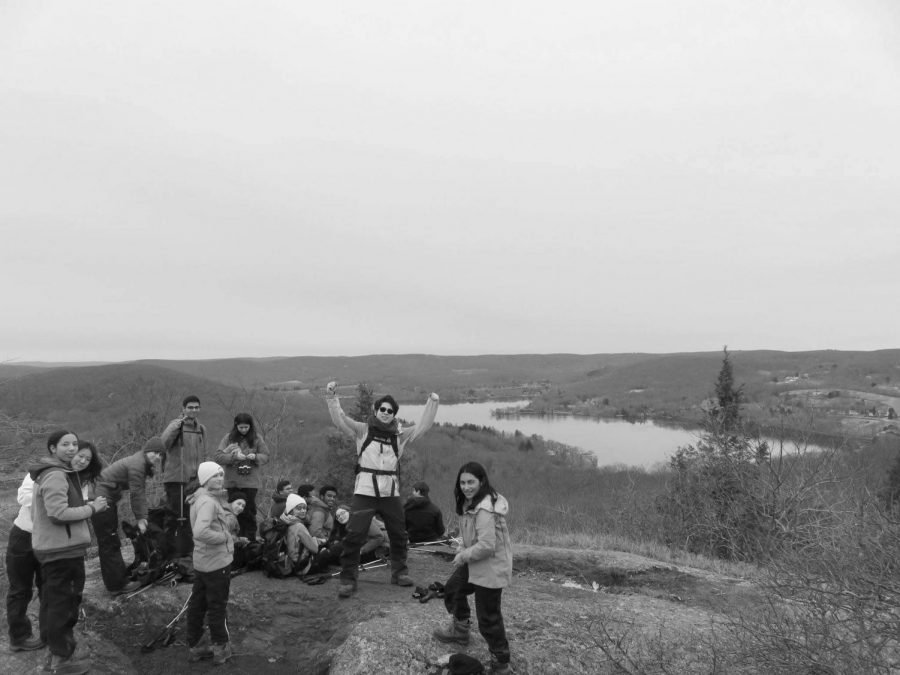 Last Friday, students from the OutDorr’s Club and Dance Company (HMDC) drove up to the John Dorr Nature Laboratory (Dorr) for a weekend full of hiking, dancing, and other fun activities.

The Martin Luther King (MLK) weekend hike has been an annual trip for the OutDorr’s Club for the past 34 years, Director of Dorr Glenn Sherratt said. “We wanted to provide a cold-weather camping experience for students who were interested. It is beautiful to be out in the snow and learn to deal with the challenges and vagaries of winter camping.”

This year, 22 students went on the OutDorr’s Club winter trip, a substantial increase from last year when only five students attended.

“Everyone on the trip was really nice and I got to know more people. Every time I go to Dorr I always have a lot of fun,” Riya Daga (9) said.

The opportunity the trip provided was unique because there aren’t many occasions for Upper Division (UD) students to enjoy the Dorr facilities, Halley Robbins (12) said.

On Friday night, the hikers gathered various materials in preparation for the hike, including layers and water bottles, Willa Davis (9) said. The main hike took place on Saturday morning and was four miles through the Maricosta Preserve. Daga knew that the hike would be challenging so she paced herself throughout, since tiring early would have only made the hike less enjoyable for her.

Although the hike had been shorter than in past years, students still had to deal with the cold winter climate, Ryan Finlay (10) said. Once the students reached the summit, they were greeted with a view of the surrounding landscape.

“One of my favorite memories of the trip was when we were eating lunch during the hike, there was a frozen river off the trail,” Davis said. “It was so beautiful and I ate lunch next to the river.”

The OutDorr’s Club slept in tents outside Saturday night, which was a unique experience for many students who had never slept in the snow before. Besides the snow being uncomfortable, it made building the fire much more difficult because the wood was wet, Finlay said. “We started burning copies of the Record to get the fire going,” he said. “We used the burning Records to dry the sticks before we could use them.”

Robbins found building the fire one of the most exciting moments of the trip, she said. “It was a really fun thing to do, and [we rewarded ourselves with] s’mores afterwards.”

The trip provided a nice break for students after the end of the first semester, Davis said. “I forget how refreshing nature can be, especially in the middle of the school year, when you’re so stressed— nature is the place to go to when you want to relax and forget about your problems.”

While the OutDorr’s Club was outside experiencing the winter elements, members of the HMDC were hard at work indoors preparing for this week’s Student Choreographed Dance Concert.

“Dance Dorr” has been a long-standing tradition before all student dance concerts, which happen three times on a four-year cycle. “It’s a great opportunity for the dancers to come together and bond, but also to learn dances that they might not know and perfect them,” Theatre, Dance & Film Studies Department Chair Alison Kolinski said.

During most of the trip, the group rehearsed their dance numbers in the barn, HMDC co-President Yana Gitelman (11) said. “Because there were so few of us, we had lots of time to practice individually and as a group.”

HMDC co-President Mikayla Benson (11) was unsure whether the weekend would be successful because only five dancers were able to attend. “I was completely wrong,” she said, “We had such awesome people; I couldn’t have asked for a better group.”

Going into the weekend, the dances were all choreographed and learned, but the environment of Dorr allowed dancers to further develop the interpretation and meaning of their pieces beyond the moves, Benson said.

Because the group didn’t access electronics often, the members were more present with each other and had more opportunities to interact with each other and explore the pieces, Gitelman said. At school, stress and other distractions can lead to a decreased quality of practice.

On Saturday night, the dance ensemble went to the Warner Theatre in Torrington, CT to see Momix, an internationally acclaimed dance company known for its abstract and inventive dances, Kolinski said. The performance featured many non-traditional numbers that included a dance performed entirely on skis and a classical Bach song where half the dancers were inanimate mannequins.

Despite being unfamiliar with the unusual style of choreography, the students were impressed with the dancers’ talent. “There [was] a certain dedication and motivation for excellence that I haven’t seen in a while,” Benson said. “It was good entertainment because good entertainment is something that you think about after. That’s my goal for the dance concert.”

Kolinski hopes that the students were able to enjoy but also learn from the performance. “The ease and the intensity and how beautifully they executed it, it was just flawless,” she said.

For both the OutDorr’s people and the dancers, Dorr provides an opportunity to become closer and spend some time in nature, Mika Asfaw (12) said.

“Although we knew each other before, we all got closer and bonded,” Gitelman said. “It was nice to take that into show week.”

“I don’t think you can replicate Dorr’s feeling anywhere else,” Asfaw said. “It was a great experience — I made new friends and made stronger relationships with ones I had already.”+