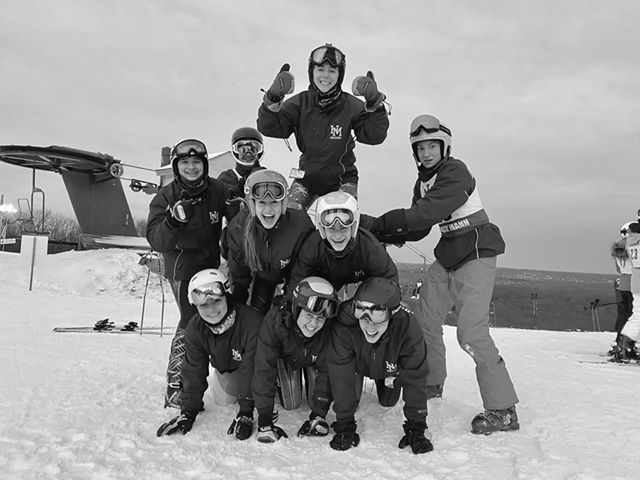 Though other winter sports may be starting to wrap up, the Varsity Ski Team experienced one of the peaks of their season winning three races in this week alone.
Although all members compete, only the top five times for races count toward the final race results. During their races on Monday and Tuesday this week, the Lions won against eight teams altogether.
The three races this week took place at the Campgaw Mountain Ski Area in New Jersey. Though it’s typically uncommon for any team at the school to have three races in one week, the public school league that the Lions participate in needed to fit more races in before the sectional and state competitions.
On Monday, standout performances on the team included Adam Frommer (11), who won the boys race, and Emma Djoganopolous (11), who won the girls race. Alexa Turteltaub (9), Luccas Correira (10), and Zach Kurtz (9) also skied quickly, completing their runs in 33.31, 27.1, and 30.73 seconds respectively.
Many of the successful skiers on the team train outside of school, Kelly Troop (11) said. “Just to watch them, their form, and everything they do is awesome.”
Typically in races, the Lions participate in the second flight of schools with a later start and end time. Right before the race, they line up in order of speed, ski one run, take practice runs while waiting for other schools, and take a second run. The better speed of the two runs counts towards the final scoring to give skiers multiple chances per race.
Coach Rawlins Troop said that he felt incredibly proud of the team’s performance, and noticed that each member skied faster and better with each race of the week.
After 10 days of being unable to race due to bad weather, the team took advantage of the perfect weather conditions by practicing and skiing on the mountain as much as possible, Jordan Wasserberger (10) said. “This is really the time where it’s in that sweet spot – it’s not too late as the snow hasn’t melted, and it’s not too early, as you don’t have to make snow.”
Despite the better conditions than last week, Captain Nelson Gaillard (12) said that on Monday, the soft and wet snow made it more difficult to ski on the terrain, but by Tuesday the trail’s quality improved.
Originally, the team only had two slalom races scheduled on Monday and Tuesday, but a third race was added after each team member wanted to participate in a third giant slalom (GS) race on Thursday. In slalom races, competitors turn numerous times in rapid succession to go through gates, or sets of poles, while in GS races, people tend to work on gradual sweeping turns with more distance between gates.
During their practice last week, the team went up to the mountain to practice skiing on edges and going through gates, especially to try GS racing, Rawlins Troop said.
“For slalom, it’s a lot of just pacing running a course, practicing blocking with your arms, and making sure that you’re maintaining the correct form,” Wasserberger said. “We practiced with GS gates once just to get a feel of it, and we all really enjoyed it, but I’m not sure how a more rigorous practice would go.”
“Clearing a gate has an art to it, if you ask me,” Rawlins Troop said. Members of the team focus on blocking gates with their shins and placing guards on their poles. The two types of gates used for practice are known as “leaners,” thin and long gates where skiers can go through with their pole up, and “stubbies” which are shorter gates that make people use their shins. Troop said that the faster skiers are able to go through all of the gates throughout the course.
Kelly appreciated spending time with her team for prolonged amounts of time, as the team hadn’t previously had multiple races each week, she said. “Being there for each other, and as I’m coming down the mountain to hear everybody cheering me on, it’s pretty special.”
“I always like to say that Horace Mann is the most enthusiastic team in terms of team spirit because we’ll be waiting at the start gate, banging our poles together, screaming at the top of our lungs, and then watch the skier go through the start gate,” Gaillard said. Furthermore, the team is one of the only ones at each race that waits at the bottom for the rest of the team to come down the mountain when finishing their runs.
“I think the ski team is the kind of team that flies under the radar, as when I first came to HM, half the [new] kids and even kids who had been here for years didn’t even know it existed,” Wasserberger said. “But it’s a really great thing to be a part of. It’s just a really nice group of friends to have.”