Sitting in advisory, watching the first 15 minutes of Lynn Novick’s documentary “College Behind Bars,” I was shocked by the conversations the prisoners were having in their college classes. Their discussions seemed just as in-depth as the ones I have in my classes, if not more. One student brought up the importance of the English language and how texting has created a dialect that diminishes the importance of words, while another researched the deaths of Michael Brown and Emmett Till. Moreover, the work these students did for their classes included staying up all night working on multiple drafts of their research papers and memorizing entire paragraphs of renowned literary works, which is similar to the kind of schoolwork my peers and I complete. As a society, especially in the context of our prestigious school, we have a tendency to think that we are far more apt than others, particularly prisoners who are completely excluded from our society. As I observed the dedication and insightfulness of these prisoners, I realized that prisoners are capable and eager to do the same coursework that I would expect to see at any other college, so why are they not given a fair chance to make use of their time?
With 53,400 people incarcerated in New York State, only a few hundred are a part of programs such as the Bard Prison Initiative (BPI). One of the prisoners featured in the documentary pointed out that there are very few opportunities to be productive in prison and that the penitentiary system is in fact put in place to punish people, rather than to rehabilitate them. According to another prisoner, people who are not a part of BPI could spend their time doing “robotic, meaningless work,” such as sweeping floors and working in the mess hall. Since the enactment of Bill Clinton’s Crime Bill in 1994, prisoners are no longer eligible for not allowed access to Pell grants to sponsor their college journies. The bill was enacted to combat the rising crime rates by further punishing prisoners. Faced with all of these obstacles that further limit their freedom, some prisoners stop bathing and cleaning their rooms, contemplate committing suicide, and simply survive without experiencing what most people assume to be their basic human rights. This sense of barely living with very limited liberty brings into question the quality of life that prison offers its inmates. Several people argue against the death penalty because everyone deserves to live, but should an existence spent in isolation, silence, and disparity be called living?
According to CNN, in 2014, 3,927 prisoners died while in custody – seven percent of these deaths were suicides. The inmates are disconnected from their families, communities, hopes, and dreams. They lose everything that we might turn to in our times of need. This absence is perhaps the worst punishment enacted upon inmates once incarcerated, which is why we need to reform the system.
We must reanalyze the purpose of prisons. If they are meant to rehabilitate and not to punish, then why has our system disconnected people completely from the world around them? Inmates leave with no new skills and no new outlook on life. One prisoner pointed out that, without doing anything productive during their time in prison, prisoners will just keep going back to what they did before: crime. A liberal arts education, critical thinking, research, and discussion allow students to understand their societies and re-engage with their communities. These resources provide people with the ability to experience different ways of living and establish a bond between the reader and anyone else who has looked at that piece of literature and felt the same feelings of hope, rage, disappointment, glory, jealousy as the protagonist. They are the foundation of a healthy society. Is that not exactly what we want from our correctional systems – to support the growth of integral members of society?
Furthermore, a large number of released inmates struggle to find work, housing, and a community connection due to their conviction. For inmates leaving high-security juvenile detentions centers, the rates of recidivism, the tendency of a criminal to reoffend, is an astounding 70 percent, according to the Council of State Governments Justice Center. Education inside prisons can help reduce this number, reconnect prisoners to the world around them, and show that they have made something of themselves.
In our history classes, we have studied the arduous journey to implementing public education for all throughout the United States, especially when learning about the Massachusetts Senator Horace Mann. The struggle to give everyone access to higher education is no different. In prison, people are still people, and they should be given ample chances to further their education, especially if they show that they really want it. Our college counselors say that “demonstrated interest” is something that colleges take into account when considering whether or not they should accept students. Judging by the 30-page double-sided draft a prisoner hand-wrote for one research paper, I would say that these prisoners have demonstrated their interest in getting a higher education. One prisoner, who kept asking one of his friends in BPI that was featured in the documentary if he had more books to give, attempted suicide as a result of all of the restrictions put on his life. During their interviews to get into BPI, people pleaded with the interviewers to let them in because they needed to do something with their lives.
The documentary shows how pertinent higher education is to the prison system. Not only does it allow for more rehabilitation, rather than punishment, but it also creates a thriving culture within a place that can get very grim, restrictive, and lonely. There are multiple clips showing prisoners studying together, reciting literature in front of other prisoners, and fomenting group discussions within the classroom. Getting a college education clearly gives a few, lucky prisoners hope and a sense of purpose. This hope should be available to everyone, including prisoners. 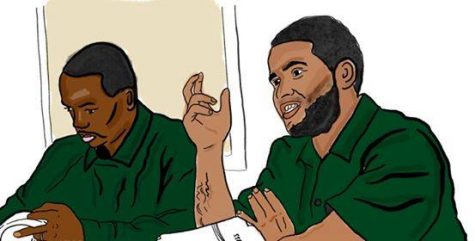