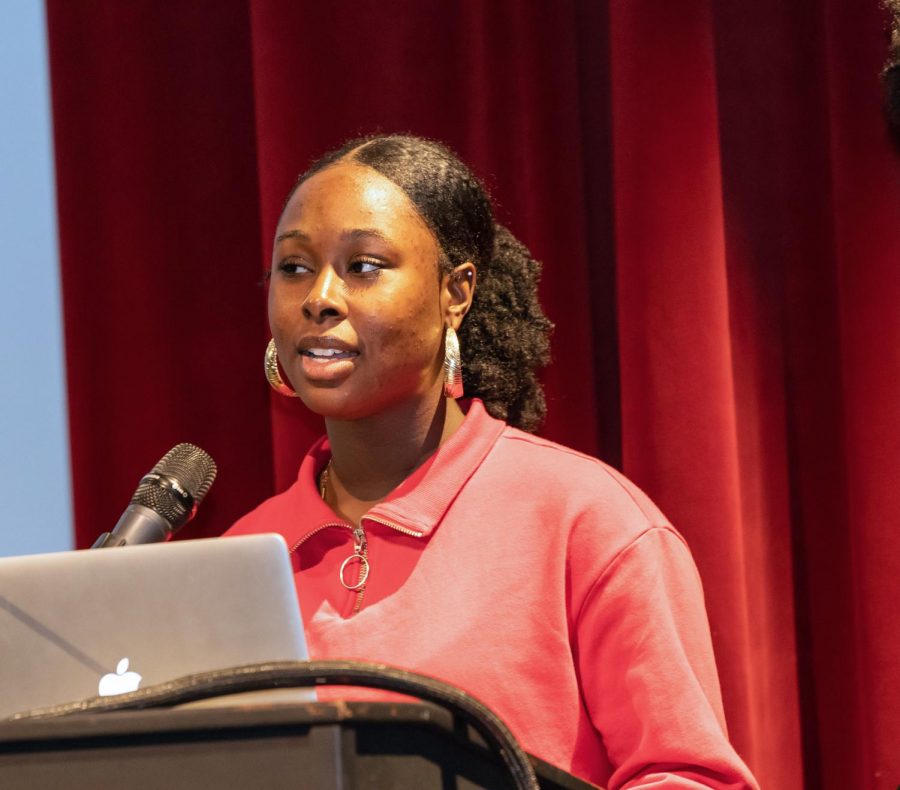 Students and parents of the three Hilltop schools gathered at Riverdale Country School last Friday evening for the second annual Black History Month Celebration, hosted by the Hilltop Diversity Coalition (HDC). Accompanied by parents, 64 student attendees, 25 of whom attend the school, joined together to celebrate black visual art and promote careers in the arts for young black people.
To begin the night, guest speakers photographer Barron Claiborne and mixed-media artist Shani Peters spoke about their respective work. Notably, Claiborne captured the iconic photo of Biggie Smalls in a crown three days before he was killed, and Peters co-founded the Black School, an art school for young people of color (POC) and allies.
The two speakers also briefly spoke about the struggles of working as POC artists. “Part of the reason we need to be here tonight, having a conversation about black people in the arts, is because it’s an exclusionary world that we don’t necessarily always get access to,” Peters said. And even outside of the arts, it is especially challenging to be one of the few students of color studying in primarily white institutions (PWIs), she said.
“In our world today, the only types of people that are showcased are white people,” Co-President of HDC Taussia Boadi (12) said. On the rare occasions that successful POC are represented, they typically have careers in math, technology, or business. The only POC in the arts who are ever showcased are rappers, which is not enough, Boadi said.
“Being black, it’s very easy to let the perceptions of other people tear you down and make you feel unworthy,” Boadi said. “I hope the takeaway was that black people can actually excel in all fields.”
Following the panel and a brief question-and-answer session, the attendees gathered in the cafeteria, where they enjoyed traditional food from the African Diaspora, such as rice, pigeon peas (Moro), and sweet plantains as well as music from a live DJ. The room adjacent to the cafeteria featured student art, and the guests could easily walk in and out of the room during the event. The works on display included poems, paintings, photographs, and sculptures, all rooted in themes of race and identity. One painting depicted the lynching of a black man on a tree on Jim Crow Road, and on the table next to it lay Elon Collins’s (Riverdale ‘19) book of poems titled “(Afro)dite: A Black Girl’s Guide to PWIs.”
Cole Davenport (11), a Fieldston student, attended the event because he thought it was necessary to show his support of his classmates’ art. “Art is something special that you share from yourself, and it’s like giving part of yourself to the world,” he said.
Attendees took the opportunity to form relationships and connect with students at their fellow Hilltop schools, Joshua Kombet (11), a student at Riverdale, said. “We’re all in similar spaces at these PWIs on the hill, so we all have a shared experience,” he said. In fact, Kombet struck up many conversations throughout the night with students from other schools whom he had not met before.
The shared experiences and perspectives that the students had shifted the mood of the event, Micheye Trumpet Jones (12) said. “There was a mutual respect and understanding that was more than for any stranger.”
Towards the end of the event, students from all schools congregated in the center of a cafeteria, forming a dance circle and singing along to pop and hip-hop music.
Though the attendees enjoyed the art, music, and food, Haris Adolph (9), who attends Riverdale, would have liked a more diverse turnout. “Maybe this is geared towards people of color, but I think it’s also important that people who aren’t people of color show up,” Adolph said. “It’s a way to show that people aren’t so different from each other, and it’s a way to strengthen a community.”
When only POC attend events like these, it defeats their purpose, which is to promote diversity, Riverdale art teacher Nicky Enright said. “The students would like to be inclusive about this, and have everyone come out and support the diversity of the community, and if all the white kids stay home, then how are you celebrating that diversity?”