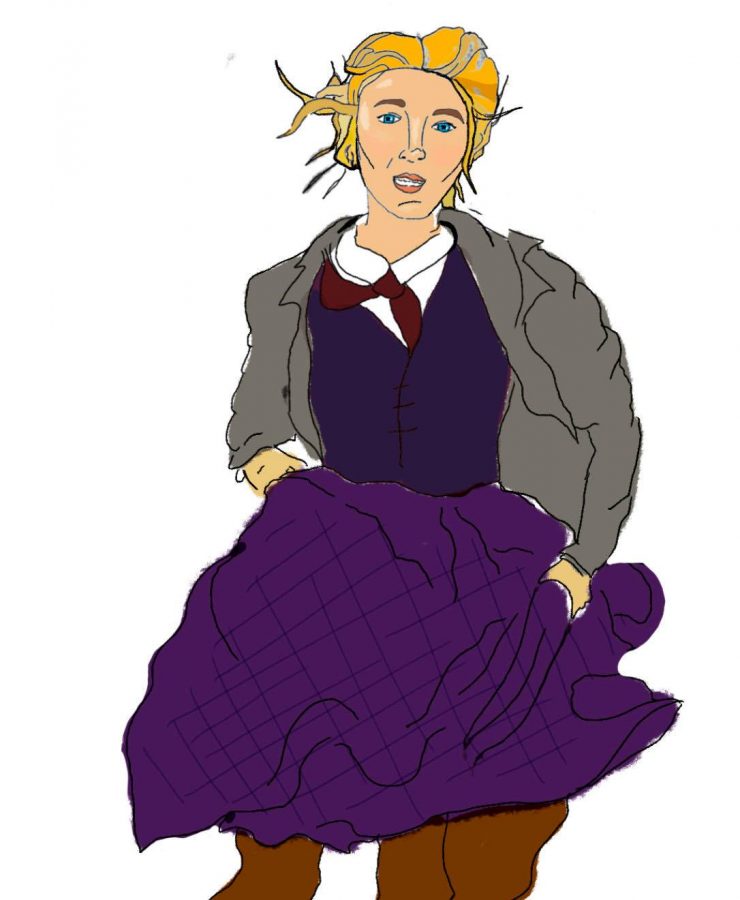 “I have lots of troubles; so I write jolly tales,” wrote Louisa May Alcott, author of the original 1868 novel “Little Women.” In the opening seconds of director Greta Gerwig’s adaptation, Alcott’s quote appears on the screen, which is ironic considering the film’s storyline: the plot is centered around misogynic standards, sisterly betrayal, and even death.
“Little Women” follows Jo, an avid writer, and her sisters as they grow up together in Concord, Massachusetts. As expected for a 19th century novel about women, marriage is a particularly strong plot-point. Class tension, which sets the Marches apart from their neighbors, the Laurences, constantly reminds the sisters of the importance of marrying rich to provide for their aging parents. But Jo is a precocious writer, and throughout the film, she makes it clear that she doesn’t need a husband to be happy. Through Jo’s defiance to suitors and her family’s wishes, “Little Women” comes to embrace female independence and contentment with being single, a relatively forward-thinking and modern motif.
Despite these hardships, the March sisters—the literal “little women” Alcott wrote about—stuck by each others’ sides through tumultuous marriages, financial struggles, missed job opportunities, and sickness. In an age where passionate flings and hook-ups are arguably the most prominent display of love and affection and the centerpiece of many romantic movies, the power of sisterhood is often neglected by filmmakers as a true source of lifelong companionship. However, the compelling dynamic between Jo, Meg, Amy, and Beth March proves that familial ties are truly meant to last forever. Their miniature theater company, for example, which (at first) consists only of the four sisters, endures the tests of poverty, time, and marriage, reminding the viewers that no matter what obstacles they face, the show must go on.
The idea to turn Alcott’s famous novel into a film is not remotely new; past adaptations starring film legends such as Judy Garland, Katherine Hepburn, and Winona Rider have been critically acclaimed, each one outdoing the last. What sets the 2019 version of “Little Women” apart is Gerwig’s ability to bring modern authenticity to a love story set over a century ago. There’s something about an old-fashioned love story, in all of its slow-paced and grand gesture-filled glory, that a 21st-century romance simply can’t replace. Conversely, an outdated depiction of courtship is bound to prove lackluster in the “female empowerment” department, with the male partner often taking the lead in most of the decisions made between the two. However, Gerwig’s portrayal of Laurie and Jo’s relationship—from the first moonlit dance to the marriage proposal rejection—shows the audience that it is indeed possible to swoon for someone while maintaining a degree of emotional autonomy.
If only the film’s feminist-themed choices carried through consistently in the movie. Even though the characters seem progressive, Gerwig clearly directs the film to be a period piece; the plot ensues in a nineteenth-century home with nineteenth-century familial roles and expectations. Therefore, whatever feminism exists is often overshadowed by Alcott’s writing—one without contemporary feminism in mind. In the last few minutes of the movie, Jo contradicts much of her built-up sense of independence and gives in to a proposal she was fighting against the whole time. In a movie about sisterhood, the film’s ending could not be more regressive.
When a movie is remade—or when any piece of art is redone—it should have something different to say. It should stand out from its predecessors, lest the film lose its value in the modern-day. Granted, Gerwig’s decision to stick nearly exactly to the plot is a commendable one; Alcott’s renowned story deserves to stand the test of time. But in an age where culture is accepting feminism more and more, it felt as though Gerwig threw in the towel at the last minute: she handed out the romantic ending that viewers want rather than the right ending in order to bring the story up to today’s speed.
To see Gerwig’s “Little Women” is to grow jealous. A heartedly picturesque, wholesomely refreshing film plants a seed of envy of a seemingly simple life in the countryside into the audience. Yes, it looks like March family’s world is a fairytale—or straight out of a Martha Stewart catalog with scene after scene featuring the sisters’ home-sewn frilly dresses and decadent three-course suppers. The costumes by Jacqueline Durran, an Oscar winner for her work, are particularly remarkable. Even when the sisters are at home, dress becomes a form of self-expression; the women often wear overstated and intricate gowns that only supplement the film’s grandeur. Additionally, the film’s score is elegantly hopeful, and its classical overtones fit perfectly into the traditional world of the story.
Despite its proclivity for the extravagant, Gerwig sways the audience into seeing the characters’ teenage years as an authentic representation of the choices that one has to make when growing up. For “Little Women,” at least Gerwig’s rendition, reminds us all of the joys in love and sisterhood beyond 21st-century gadgets and political turmoil.