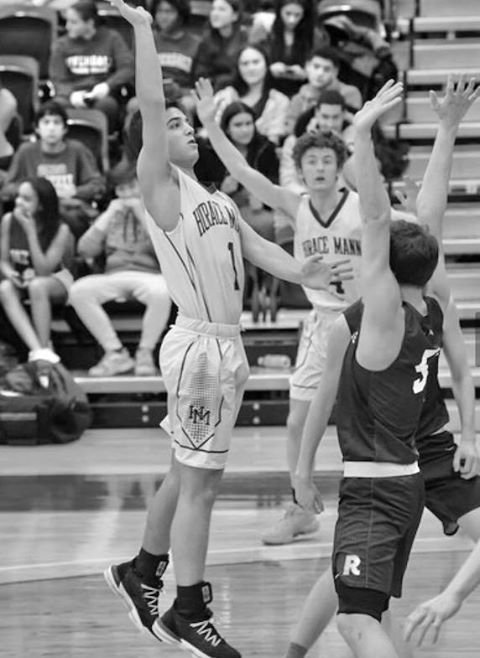 The Boys Varsity Basketball team’s season came to an end after a tough loss against Portledge in the quarterfinals of the New York State Association of Independent Schools (NYSAIS). The team finished the season with a 13-8 record, earning them a fourth place finish in the Ivy Preparatory League.
Going into the year, the team didn’t have many expectations, but they did have a few goals, Robert Mantz (12) said. “I think our goals were to compete with everyone and hopefully steal a few big games and get into the playoffs.”
While many of the players desired to make a deeper playoff run, the season was still considered a success. The team was able to play to their strengths to win games. The Lions are the best shooting team in the league, Ben Chasin (11) said.
The team’s success can, in part, be attributed to the growth of team chemistry. “We have been playing with each other for a couple of years and are all around the same age, so it’s easy for us to bounce ideas off each other and push each other to work hard everyday and be the best team we can be,” Ethan Irushlami (11) said.
Multiple players, including starting point guard Eddie Mantz (11), played a crucial role in the team’s success. Mantz “[Mantz] always managed the team on the court and was in control on both ends of the floor,” Avi Kapadia (11) said.
Another player on the team who played especially well during the season was Darius McCullough (12), Chasin said. “Darius was really big for the team coming off of the bench,” Chasin said. “He rebounded incredibly well, and had some clutch buckets late in games.”
The captains, Mantz, Mccullough and Jack Blackman (12), have had an immense impact on some of their younger fellow teammates. The captains are always encouraging the team and lifting everyone up, Chasin said. They were a big part of why the team was so close. “They have helped the relationships with everyone on the team grow stronger,” Chasin said.
“Our captains have pushed us everyday in practice,” Irushlami said. “Their goal was to win. They made us just work as a team and stay focused and disciplined.”
With the leadership of the seniors, the team was able to conduct effective practices where some players drastically improved their game. “I think we learned a lot about sharing the ball, running through the full offense, and communicating on both ends of the floor,” Irushlami said.
The team’s lack of height forced them to navigate through taller opponents. Chasin praised the team’s ability to secure rebounds and box out despite the size disadvantage.
“We definitely realized throughout the season that no matter our size, we can beat any team in this league,” Chris Robinson (11) said.
Looking back on his high school career on Boys Varsity Basketball at the school, Mantz is thrilled to be able to say that the team has improved drastically over his years playing with everyone. “We were 1-13 in the league my sophomore year,” he said. “To be able to look back on that record, all those years ago, and recognize the fact that the team went 13-8 this year is amazing.”
For Mantz, the season’s coming to a close is an unfortunate occurrence, he said. “I’ve played basketball for 13 years, so the fact that my highschool career is coming to an end is sad, but I couldn’t be happier with how it went.”

Next year, the team hopes to build off their strong showing this season and continue to build chemistry and make a deeper run into the playoffs, Irushlami said.