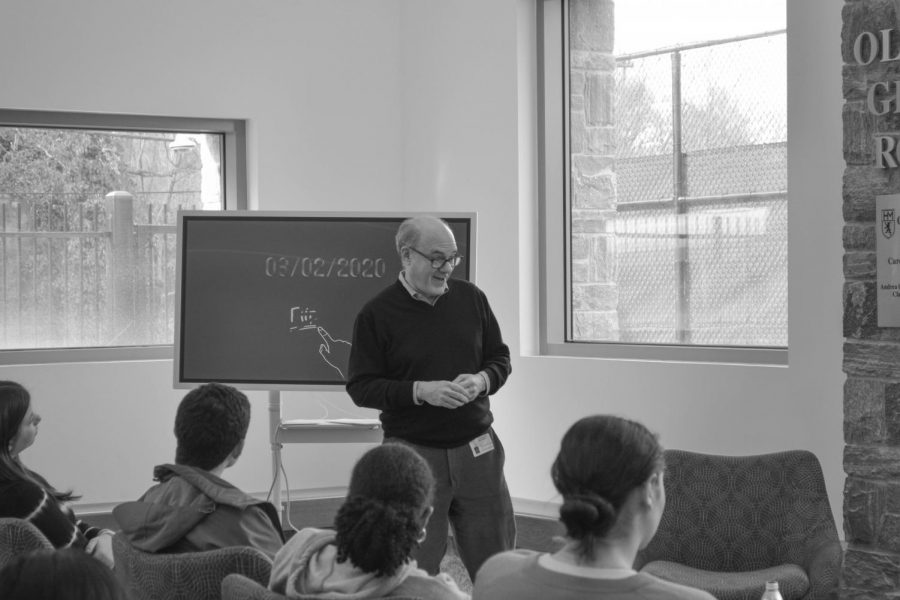 On Monday, Pulitzer Prize-winning Senior Editor of the Washington Post Mark Fisher ‘76 gave a talk to students during G, H and I period, highlighting his career in journalism. The talk was a part of the Career Lecture Series initiated by CC Representative Jaden Kirshner (11), which gives students the opportunity to learn about the various career paths of Horace Mann alumni.
Kirshner reached out to Fisher because of his expertise in political journalism, which Kirshner felt would appeal to many students. Though Fisher visited the school last year at an event hosted by The Record to speak about the role of media in the world of journalism, Monday’s talk was more focused on his personal career path.
English teacher Harry Bauld brought his G period class to the talk because he wanted his students to hear from such a talented and accomplished writer, he said. Fisher wrote an article called The Master for the New Yorker that Bauld found to be an extremely well-researched blend of personal history, reporting, and storytelling. He plans to share it with his juniors as a model of a possible junior research project.
Adam Frommer (11), a staff writer for The Record, attended the talk because of his passion for journalism, he said. He was interested in hearing about what a career in journalism would look like from a successful professional. “Journalism is not something most Horace Mann students are thinking of going into, so I haven’t heard any journalists speak,” Frommer said. “It exposed me to a job path that I’ve been thinking about but I don’t know much about.”
Many of Fisher’s high school extracurriculars have helped him hone his journalistic skills. For example, his theatre experience helped him with his inherently shy personality, he said. “Journalism, like theatre, is one of those ways in which shy people force themselves to go out into the world, and talk to people you would otherwise never talk to.”
In high school, Fisher was involved with the Record, where he acquired skills he uses to this day in the workplace. Writing different styles of articles, making difficult decisions as Editor-in-Chief, and running controversial pieces despite pushback from the administration were all good training for real-world journalism, he said. “It was an enormous time-suck but we loved every second of it,” he said.
Fisher went into college intending to pursue a career in politics or law. Although he never took a journalism course, he realized that it was far more motivating and exciting than the political field, he said.
“That shows me that I don’t have to close myself off to any career paths or options, and that I don’t need to necessarily know what I want my career to be in the future as of right now,” Julia Goldberg (11) said.
Rosy Arora (11) agreed that it was nice to see somebody who started out pursuing one thing was able to make a switch in professions and still be successful, she said.
Though Fisher values prior journalism experience when hiring, he generally prefers college students who have studied in-depth in a field other than journalism – whether physics or English literature – as it demonstrates the curiosity required for reporting, he said. To Goldberg, it was really interesting to hear how the skills of journalism are so applicable to all the different aspects of the profession.
For Nshera Tutu (12), who is in Bauld’s class, the idea of using versatile skills within a particular field was satisfying to hear. “When I’m thinking about my future career paths, I have this idea that in order to be successful I have to take specific classes and do specific things,” she said.
In over 30 years at the Washington Post, Fisher has held various positions, including Enterprise Editor, local columnist and Berlin bureau chief. He is currently a Senior Editor, which, contrary to what the name suggests, involves more writing than editing. Fisher enjoys taking on different roles because it makes his job feel new and fresh, he said.
In addition to sharing his experiences, Fisher offered advice to the school’s aspiring journalists. Frommer recalls Fisher saying that one of his editors once told him that “every article should question the meaning of life,” he said. Although Frommer feels that this may have been a slight overstatement, the idea of how every article should bring up larger, deeper questions than just what lies on the surface struck him.
Ellery Lapin (10) does not plan on pursuing a career in journalism, but still found aspects of the talk to be relevant to her life. The talk helped Lapin realize that while she has access to reliable news sources, a lot of people choose free, potentially biased information over paying for higher quality information, she said.
Over the years, Fisher has witnessed a rise in biased media, which he believes is a result of the internet and the way it incentivizes strong allegiances, he said.
Fisher recommended taking measures to gain exposure to both sides of the story, such as clicking on headlines you would not usually pay attention to. “I think that is a hugely educational thing to do and is eye opening to see,” Fisher said.
“It was inspiring to hear from someone who’s writing style had evolved out of The Record itself, and to hear from someone for whom The Record was the springboard for a career in journalism,” Goldberg said.