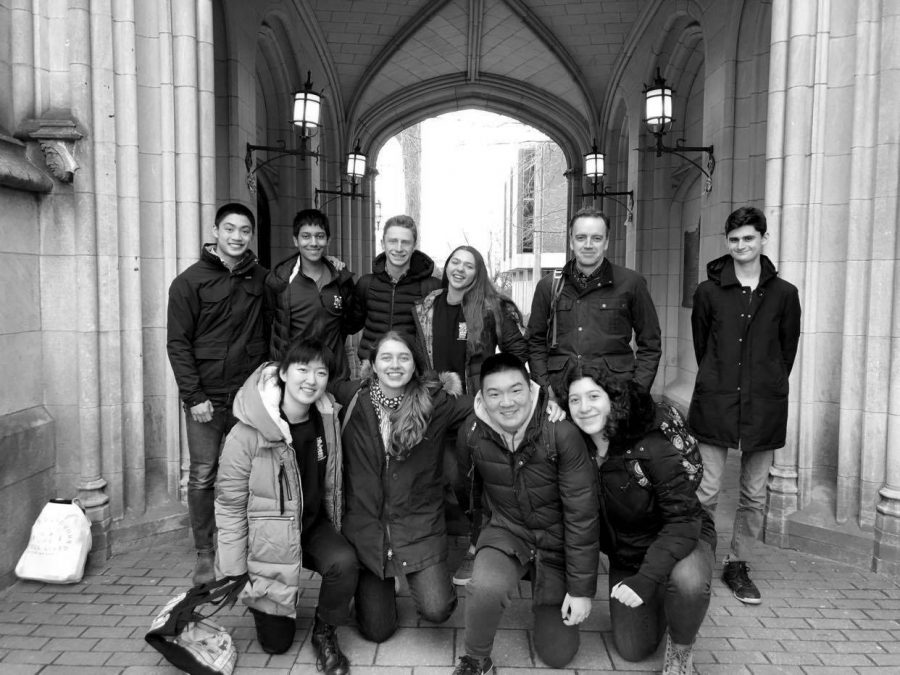 Following hours of flipping through the pages of their old history and Latin textbooks, the Classics Society Club advanced to the semifinals of their first national certamen this year. The group of nine students competed at Princeton University on Saturday as two separate teams amongst several other students from all over the nation.
The Classics Society Club was started by the current President, Wilder Harwood (12), at the end of her sophomore year. “I just wanted to have a club for people who were also really interested in Greek and Latin because I felt, in terms of classics, there wasn’t so much of a specific group for that,” Harwood said.
The club is comprised of people who take either Latin, Greek, or both, and who aspire to celebrate the classics, Paul Wang (12) said.
Similar to a quiz-bowl game, a certamen is a competition where multiple contests are held, with three teams of four people who participate in each round. Together, the students answered questions based on three main subjects: history, grammar, and mythology, Steve Yang (9) said. “The moderator would ask a question, whoever got the answer first pressed the buzzer, and then there were two bonus questions after if you got it right,” he said.
The certamens, although there are only a few, are the busiest time of the year for the club, as the club spends several weeks preparing earlier on, Harwood said. “If we are running into a Certamen, we are probably studying. Sometimes we are prepping for a long time by practicing on Quizlet, running through grammar rules for Latin, and memorizing dates and history terms,” she said.
This being their second Princeton Certamen, the leaders were more prepared than last year. “We sort of knew what we were up against, since we knew the topics, the categories, and the specificity of the questions after looking at past exams,” Harwood said. “We kind of had a strategy in place when we went this year, so even with the same amount of time to study, we were a lot more efficient.”
The Certamen also allowed students to interact with participants from other states who shared a passion for the classics. “I didn’t realize that there was such a community,” Nina Gaither (11) said. “Even though it seems that the language is kind of declining in popularity, it was nice to see that there were so many teams ready to participate,” she said.
On the other hand, some of the newcomers, such as Yang and Wang, were somewhat intimidated at first by the experienced teams that traveled from around the country. “I was nervous because some of the other strong teams from Massachusetts and Pennsylvania buzzed in two words into the question,” Yang said.
The club’s hard work and courage paid off, the two teams representing the school ranked in the top nine and managed to proceed to the semi-finals. “The highlight was definitely being told that we qualified for semifinals after we bounced back from the second, to present a really good showing in the third preliminary round,” Yang said. “ I think everyone shined in different ways.”
Latin teacher and club advisor James McCaw thought that the two teams proved as excellent ambassadors that represented everything good about Horace Mann. “They were kind and considerate but also competitive,” McCaw said. “It was great to watch them go through the process of figuring out what the answer should be as well as flex their knowledge in front of other students,” he said.
Harwood agrees with the same sentiment and she explains the reason that the clubs make an effort to attend the certamens is because they add a sense of fun to learning about the humanities by bringing the dead languages alive, she said. “Our last round was probably our best because we were at a really close level with one of the other teams and we were just going back and forth which was really fun,” Harwood said.
“Getting to know people and spending time with people outside of the classroom was great because we got a chance to get to know each other,” Wang said. “The mix of competition and camaraderie that I found with my teammates was one that I especially enjoyed.”
“It’s important to explore what there is beyond just simply what we’re learning in class is that there’s much more that can be done in terms of either competitions, or any other things that are done outside of the classroom,” McCaw said.