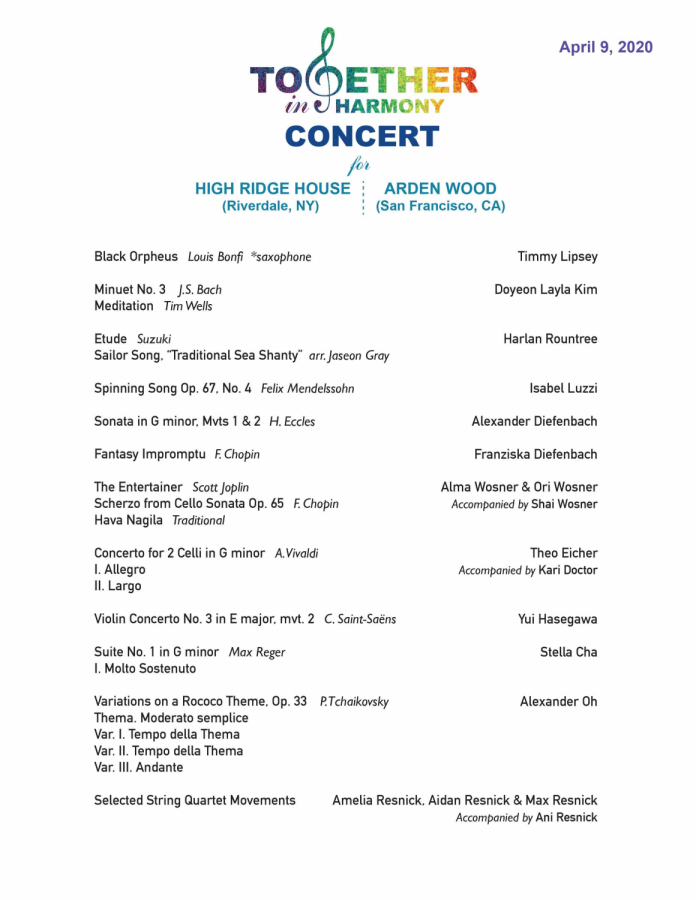 “Dear giving musicians, It had been a very gray and rainy day here in Riverdale, New York. But just before your wonderful concert started, the sun came out, the sky turned blue, and the universal language of music brought the lilt and light of your delight into our hearts. And the world seemed bright again.”

Those are the opening lines of a thank-you note written by L.P. Sussman, a member of High Ridge House, after watching an online concert put together by Together in Harmony, an organization created by Richard Lipsey P’22 P’27 P’28 to connect people with music while social distancing, he said.

A few weeks ago, Lipsey read an article in The Washington Post about two children who played music for their elderly neighbor who is self-isolating due to the COVID pandemic, he said. The article was in response to the viral Twitter hashtag “Songs of Comfort” started by Yo Yo Ma, he said. Soon after, Lipsey had the idea to have student musicians perform online for people in assisted living centers.

Lipsey’s sons Timmy (5) and Alex (4) have the same cello teacher as Alexander Oh (11), a member of the student classical music group Harmonia. Alex and his friends started Harmonia two years ago to play music and raise money for Summer on the Hill. Lipsey reached out to Alex because of the ensemble’s talent, he said. “I knew if I reached out to Alex, I would immediately tap into 10 Julliard-level high school musicians.”

After hearing the idea, Alex reached out to the other members of Harmonia, who all eagerly volunteered, Alex said. “At a time like this you need to have something to bring communities together because everyone is literally disconnected,” said Stella Cha (11), a member of Harmonia. “It felt like we needed to do something to help people feel more of a sense of community.”

Mikayla Benson (11), who is also a member of Harmonia, has found comfort in music during these difficult times, she said. “This is a very odd time, and I’ve found that listening to music and playing music has been a really great way to find some of the feelings we’ve lost. Music makes you feel less lonely, so being able to share it with our community is a gift.”

Once Lipsey had the idea, he reached out to his many contacts in the music world, he said. Next, Lipsey connected with various nursing homes and assisted-living centers that he found on the Internet, offering the services of Together In Harmony. “I was kind of like the wizard behind the curtain because I didn’t have other musicians at the time. I was kind of selling snake oil or something,” he said.

Alex’s mother, Veronica Oh P’17 P’21 was excited to help with the project because “everybody wants to do something nice and good in this time,” she said. Veronica has a background in graphic design, so she created Together in Harmony’s logo, as well as the concert’s programs. She now manages each conert’s lineup, trying to include performers of various ages and instruments, she said.

On Friday, April 3rd, the musicians all joined a Zoom call for their first performance for Kendall at Ithaca Nursing Home. As time passed, more and more audience members joined in, Veronica said. “It was so heartwarming,” she said. “It’s one thing to give a large concert where you don’t pay attention to the audience. But the fact that you could see the people felt like we’re really reaching out to people.”

Everything went smoothly for the most part, but because each musician was performing from a different environment, the sound was inconsistent from one person to the next, Veronica said. She and Lipsey are considering having them use microphones, but it isn’t certain yet.

For Alex, the most meaningful part of the concert was seeing the younger children perform for the older adults, and being able to talk to the audience members afterwards. “At first I thought I was just going to play, but seeing the faces of these elderly people really gave me a sense of gratitude – and this was just a little thing I could do for them,” he said.

Similarly, Cha enjoyed the post-performance conversation, she said. “Hearing them express their gratitude and joy after listening to us play was very rewarding. It reinforced to me the idea that even a small act such as performing a three minute piece could make someone’s entire day or week.”

The concerts have been special for audience members as well as musicians, Executive Director of High Ridge House Marivic Bay Mabanag said. “Everyone loved it, it was really beautifully done,” she said. “There’s always a nice way for young people to be of service, and to me that was the key, for young people to feel like they’re giving back and sharing their gifts.”

In the past few weeks, the movement has grown a surprising amount, Veronica said. Through word of mouth, 58 musicians around the country – and one from Singapore – have signed up to be a part of Together in Harmony. Performance slots fill up a day or two after being sent out, and finding time for everybody to perform has become a challenge, she said.

The group’s last concert took place on Wednesday for Genesis HealthCare’s Around Paris In One Day event and was covered by NBC. Genesis has locations across the country, 100 of which tuned in to the concert. “As much as you feel confined to your home, the fact that you can reach out to people so far from us was strangely empowering,” Veronica said.