The (Dis)united States: How American high schools are proceeding through distance learning 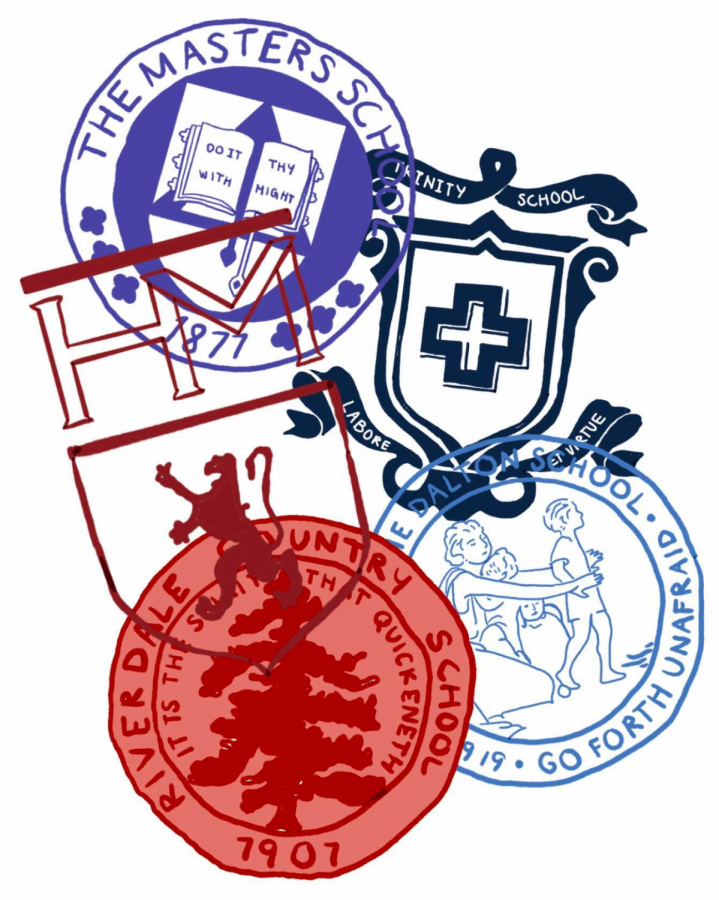 Though New York Cityhas remained the primary epicenter of the coronavirus, at least 124,000 public and private schools around the country have closed, according to Education Week. As such, many schools have started experimenting with different structures to accomodate a new virtual schedule.
In response to the varied levels of accessibility among its students, the administration at Stuyvesant, a highly selective school in lower Manhattan, has encouraged teachers to rely less heavily upon live video sessions, said Camilla Green, a senior. Deadlines of individual assignments have varied, which has made Green’s schedule less structured than before.
As a result of the decentralized learning structure at Stuyvesant, Justin Sword said that his schedule is mainly dictated by his own choices, with the exception of video classes in three out of nine courses. However, the shift to more independent work has also increased the amount of required writing assignments, which has doubled the amount of work he has.
In a similar structure to Horace Mann, Trinity School has biweekly Zoom meetings for each class. However, instead of following its normal daily schedule, Trinity shortened the school day to only run classes between 10 a.m. and 2 p.m. and created new hour-long set blocks per class.
Meanwhile, Edgemont High School in Scarsdale has implemented optional office hours for an hour each day for students to ask questions. The rest of the time, students are assigned work to complete by themselves. Anisha Musti, a freshman there, said that she feels an obligation to join, which has often been counterproductive when repetitive questions are asked.
Due to the combination of office hours and independent work, Musti said that she finds herself spending around four to five hours on homework whereas she would typically spend around two.
The Masters School also has an optional office-hours session for thirty minutes in the morning, which has not changed with distance learning, Annie Rubinson, a senior, said. Since they implement the Harkness method, a discussion based learning system, each class has video chats during every regularly scheduled block. During these calls, teachers will often break up the class into smaller groups while rotating between them to spur participation.
At Lambert High School in Forsyth County, Georgia, work has consisted of independent activities assigned through an online platform with the occasional video call to check in, junior Sri Pinnamareddy said. One of the reasons that students can have less work with independent learning is because Lambert starts in August, so many AP curriculums have already been finished.
Cora Cole, a junior at Bainbridge High School in Bainbridge Islands, Washington, said she disliked that her school has only assigned work on Google Classroom. She wanted her to school to offer scheduled calls for students to engage in after three weeks of closure. “It’s essentially homework without the school day,” she said. Since Cole found that she benefits more from direct interaction and discussion, she plans to ask the school to use video chatting platforms, or to film lectures.

TECHNOLOGY / ACCESSIBILITY
Accessibility to technology and the internet has presented a major barrier to an equitable virtual education system.
A 2018 study by the Pew Research Center finds that one in five American students lacks computers or high-speed internet. In response to these barriers, the NYC Department of Education (DOE) has agreed to give each student a Google Classroom and Microsoft Office 365 account and has begun the process of prioritizing internet-enabled device distribution.
J.J. Post, a senior at St. Peter’s Prep in Jersey City, believes that it may be easier for his school, as a private institution, to transition to virtual learning and not be “too reactionary” without having to explicitly follow the state system, he said.
Nonetheless, Darius Korin, a sophomore at The Birch Wathen Lenox School, said that online schooling makes it more difficult overall for students to complete work because they no longer have access to in-person resources such as teachers.
Pinnamareddy, who said her own school’s transition to online learning was relatively seamless, has heard stories of the hardships imposed by school closures in impoverished areas. “Around Georgia specifically, my teacher was saying that there are students in more southern rural areas that have to drive to their local McDonalds to even get access to the online AP videos.”

GRADING CHANGES: Access + Academic Dishonesty
Though Horace Mann announced that it will continue with a conventional grading system for the Upper Division, many schools have chosen to adjust their grading systems to compensate for potential problems with accessibility and academic dishonesty.
Micheal Ding, a junior at Trinity, said that he is in support of a mandatory Pass/Fail (P/F) system. “For a high school size of 500 kids, you know that someone’s family is going to be deeply and personally affected,” he said. “It’s just a guarantee that they are not going to be able to really focus on their education as much as they used to.”
On the other hand, Musti takes issue with Edgemont’s mandatory P/F grading due to the work that students had done prior to the closure, she said. “We finished 70% of the third quarter in person so changing the entire system to P/F is really invalidating a lot of the work that people did, and now we’re not going to be able to raise our averages for the year.”
The Punxsutawney Area High School made online courses as an optional opportunity for students to raise their grades because many students in the rural district lacked access to the internet. Though Emmet Jamieson, a senior, prefers learning at school, he is happy with the grading system picked, he said. Because any work done in virtual learning can only improve a student’s grade, Jamieson plans to only do work for his AP classes, he said. “I’m pretty happy with it because after four years of high school, it’s kind of nice to be a little lazy for once.”
The NYC DOE policy prohibiting changing grading systems in the middle of the year has made it difficult for Stuyvesant to change from their usual 0-100 scale, Greensaid. However, the Student Union, which is composed of the class president and student government, has surveyed students and reached a consensus that some sort of alternative grading system would make the system more lenient for students lacking access to technology, though opinions vary widely on the specific type to implement.
Sword, who had COVID-19 for the first two weeks of virtual learning, is in support of a P/F system since there otherwise is not a school-wide policy regarding the large number of students who may be directly affected by the pandemic, he said. “Putting in extra stress of keeping grades up for college, especially for second-semester juniors like myself, it’s just completely unnecessary during this time and insensitive of the DOE.”
One important aspect of The Masters Schools’ decision to use P/F grading was a large number of international students that have gone home, Rubinson said. At the same time, the school still has individual graded tests and quizzes.
In Rubinson’s AP course, the exam followed suit with the College Board in allowing books and notes but with a higher difficulty level. “They’re not just going to ask you a question that you could just find in the book and copy the answer because then everyone would get an 100,” Rubinson said. “It strikes a good balance between making sure that everyone’s on a level playing field and also encouraging you to prepare.”
Though St. Peter’s Prep has not changed its grading system, Post foresees potential problems with cheating. “With online [school], kids have a free leash, and they’re always going to take that to a great excess,” he said. “I think that culture around access is different, and our challenge is avoiding that temptation.”
At The Birch Wathen Lenox School, teachers have changed the weight of grading to prioritize participation and homework over test grading, Korin said.

EXTRACURRICULAR
Apart from academic concerns, many students expressed the importance of extracurricular involvement, counseling, and connecting with peers at their respective institutions. At Horace Mann, the Department of Counseling and Guidance is offering any student to schedule Zoom and telephone calls. Active clubs and publications have also continued in session online.
Still, this time is particularly disappointing for seniors, who would typically be experiencing their last semester of high school with events like prom and graduation, Rubinson said. However, Masters is discussing postponing these events to a later time.
Trinity has arranged student organizations, advising, and fitness blocks for students to call and engage with each other, which has greatly helped maintain the feeling of every-day school, Ding said.
At Lambert, all extracurricular activities and competitions have been cancelled and need permission to begin online again, Pinnamareddy said. Similarly, Edgemont has temporarily stopped most extracurriculars with the exception of teams that organize their own involvement, such as debate, Musti said.
“We’re no longer in an environment where we can see eye to eye with teachers and actually have proper engagement,” Korin said. “I think it has definitely affected daily life because you don’t get to see your peers every day.”