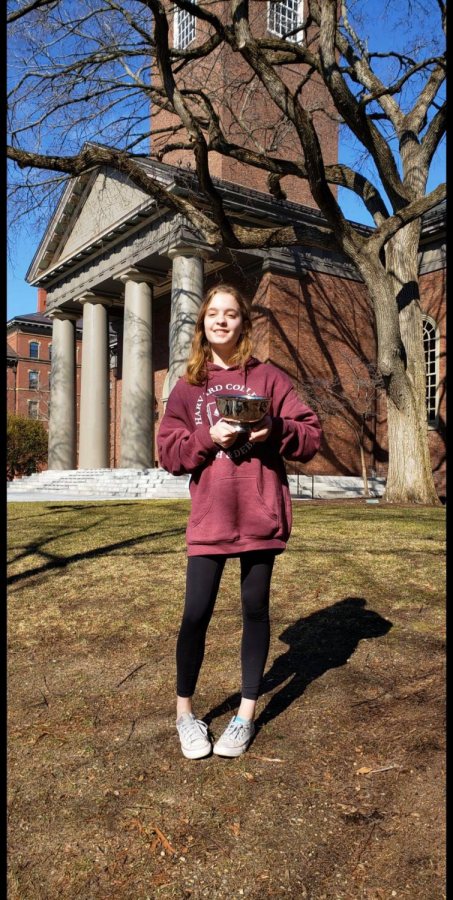 After debating in the Georgetown Spring International Tournament over the past long weekend, Maeve Goldman (8), and her partner Richard Zhang, went undefeated and became the 2020 co-champs in the Middle School Public Forum division.

The Georgetown tournament was meant to be held at the university, but due to the COVID-19 outbreak, the competition was rescheduled to take place virtually over the course of two days. Technical difficulties forced the tournament to stop before the semi-finals, in which Goldman and Zhang held the first seed.

Having to debate on Zoom proved initially problematic for the duo. “For me, I had issues with my sound,” Goldman said “So my laptop wasn’t working for part of my first rounds, and then I had to switch my devices.”

Their efforts showed great results, and, although officials had to stop at semi-finals due to technical difficulties, it was a big moment for Goldman and her partner, as they were the only undefeated team along with being first seed, she said.

Even without technological issues, communication and prepping was still another set of obstacles to overcome. The team, thinking it was going to be canceled like other tournaments, was notified with limited time before the tournament, and they only began prepping two weeks before.

“We really didn’t have a lot of time, and it was on the new April topic too,” Goldman said. “So it was pretty hard and really stressful prepping for it at first.”

Goldman’s career in debate initially started in her seventh grade year at the school, but previously, she only went to creating competitions that proved less engaging than she had hoped.

“She really enjoys HM middle school debate because she meets new people and interacts with teachers as well as high school students who were helping to run it,” said her father, Gregg Goldman.

As she gradually discovered more passion for the activity, Maeve found that smaller tournaments in the New York City Urban Debate League weren’t proving satisfactory and decided to seek more ways for involvement, she said.

“In eighth grade, when I joined the travel team for my outside of school program, they were going to a lot of different, higher-level tournaments, so I followed along and signed up for those with them,” Goldman said.

According to Gregg Goldman, the school’s club doesn’t participate in every tournament for middle school, although the team is more involved in the high school league.

“She debates with her local Bergen County Debate Club (BCDC) from Fort Lee for more experience because they attend almost all of the local and regional tournaments, like Gerogetown’s,” he said.

Throughout the school year, Goldman continued to partially prep with the school and still went to the weekly debate meetings, but once she enrolled in the team, she met her debate partner, and they proceeded to larger tournaments under BCDC’s title.

However, as it is Goldman’s first year on the middle school national circuit, she has experienced many new challenges with the rise in difficulty, especially in the recent tournament.

“It was definitely a lot harder than before because a lot of the kids like that were in my life debate year they’re really good, and they’re really advanced.”

Despite the unexpected complications, the rest of the tournament had run in a similar fashion, and Goldman and her partner were able to pull through to give an impressive show of the effective collaboration that allows them to work well together.

“We had a separate phone call going on so we could prep during a tournament, and we were able to stay focused on what was going on, never wasting too much prep time,” she said.

Goldman attributed much of her and her partner’s success to their different styles of debate.

“My partner looks at them in a more zoomed-in manner, whereas I look at the bigger picture and focus on maintaining the general narrative of the round,” Goldman said. “We are able to cover different areas of a debate round since we have different perspectives.”

Though Gregg Goldman isn’t typically permitted to sit in on the debates, he noticed some strengths in his daughter’s abilities that allowed her to persevere in these specific tournaments.

“I just think she’s very confident,” he said. “The way she can put everything together in the Final Focus is very impressive,” he said.

As it was Goldman’s last middle school tournament, she was pleased with how the events of the tournament concluded, since her team ranked higher than other teams that have done well in the past.

“I know in a lot of the other divisions, there were less kids, but for the middle school division, it was all the same kids that went to the other national tournaments,” she said. “It was really cool that we were 6-0.”

Goldman’s victory added to a list of debate accomplishments that she has earned in the recent months, including going undefeated in a pool of 104 teams at the prestigious Harvard tournament.

“I definitely learned how to debate a lot better, as I had to do if I wanted to be successful in the activity,” Goldman said. “I just want to be able to debate more competitive rounds with more advanced competitors. I am especially excited to get into high school debate in the future.”