Family by chance, teammates by choice: dynamics of siblings playing on the same teams together 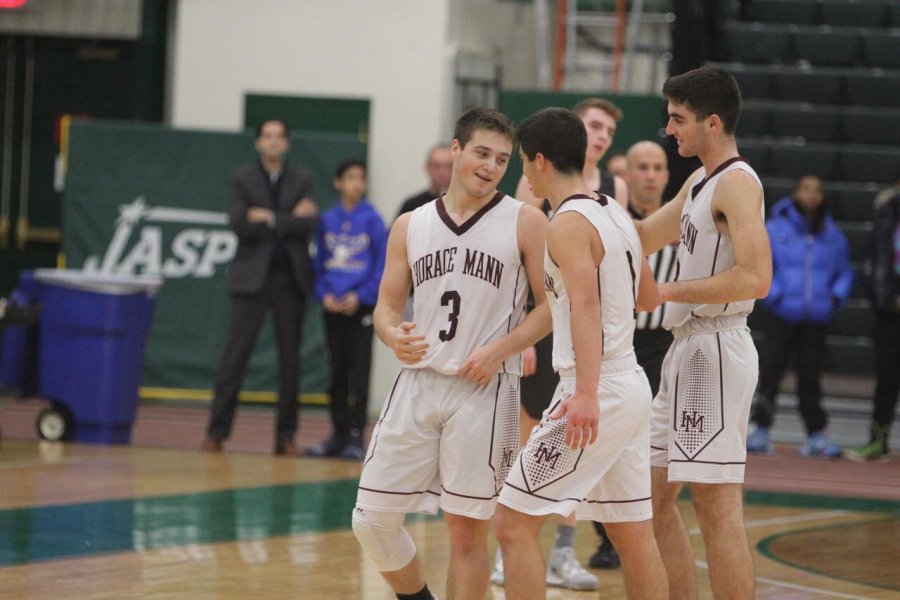 Jonas Jacobson (11), this year’s MVP of the football team, will never forget the moment his brother threw a Hail Mary pass over him in practice, he said. “Matthew was playing quarterback while I was playing defensive line,” Jonas said. “Matthew rolled out to the left, and as I was about to tackle him, he threw the ball as far as he could. I tackled him, thinking he still had the ball, which would have made it a sack.”
Matthew Jacobson (9) played his first year of high school football this year, which marked the first time the two brothers had ever played on the same team.
Having an older brother on the field with him during practices motivated Matthew to give his maximum effort at all times, he said.
“[Jonas] always does all of the drills with 100 percent effort and sets the example for me while also boosting my confidence,” Matthew said. “Whether it’s a pick-up game of basketball at home or a football game that we are losing in.”
Matthew switched from the wide receiver position to quarterback this year, and having his older brother on the team eased the process for him, he said. “It was nerve racking getting all of the plays down and memorizing everything, so having an older brother there to guide me was really helpful.”
As the older brother on the team, Jonas believes it is his duty to motivate his younger brother and be there for him at all times, he said.
Matthew makes sure to reciprocate by supporting his brother, as evident when he cheered his brother on from the bench during Homecoming, Jonas said.
“Having my brother watching me and knowing he was there with the team on the sidelines was such an incredible feeling,” Jonas said. “I hope that Homecoming is something Matthew can look forward to in the future too.”
Jonas believes that since Matthew will be a sophomore next year, the duo could potentially see some playing time together, he said.
“Being on the same team and sharing the same experiences is something that we are never going to forget,” Jonas said. “We are always going to talk about our time on the team together and how much fun it was.”

Julia Robbins (12) and Halley Robbins (12) recently finished playing their eighth basketball season together, after four seasons on Girls Varsity Basketball and previously playing four seasons together on their middle school team at the Rodeph Sholom School.
Having considerably different academic and extracurricular interests, a love for the game of basketball is one thing that they share, Julia said.
“[Playing together] is so special because we are always rooting for each other,” Halley said.
“When you have another classmate or teammate, you can often have that competitive edge with them because you’re not related to them, and you feel like you want to do better than that person,” Hally said. “Having someone that that does not exist with at all has been very special.”
Considering that the team grew better each year, Julia enjoyed having her sister by her side as the team evolved, she said. “We saw ourselves get better as basketball players, but we also got to see how each other were as leaders on the basketball court over time.”
Halley said she developed a feeling of comfort on the court that developed between herself and her sister over the years.
“You become very aware of how the other person plays, and everything becomes really fluent and natural,” she said.
Julia and Halley possess significantly different qualities, but the two complement one another nicely, Julia said. “She is a very focused person, both inside and outside of basketball, and I have more of an unfocused presence, so we balanced each other out,” she said.
While Halley was on the court with her, Julia also often felt more encouraged to play tight defense, she said.
“Halley has always played with a lot of tenacity on defense, and she would often verbally encourage me to up my defense,” Julia said. “Hearing it from a sibling was important.”
For the Robbins twins, basketball “became a whole family affair,” Julia said. “It was something our family could talk about, and our parents came to every single game.”
“Over the four years, our parents became very dedicated fans and would even come to games really early, sometimes when the gym was still being set up,” Halley said.
As a duo, the Robbins sisters have combined for a total of five First Team All-Ivy awards and one Second Team All-Ivy award over the past three years.
In addition, each sister has won multiple All-State Private School awards, awarded by the Basketball Coaches Association of New York.
When reflecting on their basketball careers, both sisters pinpointed this year’s state championship victory as one of their most memorable moments.
“We knew it was our last time playing together in a competitive environment, and [winning this game] was a storybook ending,” Halley said.
Julia specifically pointed to a photograph from the championship game. The photograph captures the three team captains, including her, Halley, and Ella Anthony (12), she said. “I was crying, and they were emotional too. It was just sad knowing that this was all coming to an end, but also nice having won the state championship for the first time,” Julia said. “That photo so perfectly captured the culmination of everything.”

“Eddie came out and hit two threes in back to back possessions, and even though I wasn’t on the court, it was so exciting watching him take over the game single handedly,” Robert Mantz (12) said.
Robert watched as younger brother Eddie Mantz (11) took over a close game against Poly Prep Country Day School in the first few minutes of the fourth quarter.
“Watching him score the way he did was really fun for me to watch as his older brother,” Robert said.
Eddie felt a similar way when he witnessed his brother scoring his 1000th point at Buzzell this year in the team’s final game of the season, Eddie said. “It hit you that our childhood of playing together was really over,” he said.
The Mantz brothers have played together in the starting lineup for two of the last three years, with the exception of last year, when Robert missed most of the season due to an ACL injury.
“Playing together has been really exciting because even though Eddie and I play one-on-one against each other all the time, high school was really the first time we have actually played on the same team,” Robert said.
Throughout their years together on the team, Eddie has seen Robert as a role model, Eddie said. “He has taught me how to lead, he has taught me how to earn minutes by working hard, and he has taught me the importance of showing up every day to practice and putting in full effort,” he said.
Aside from his leadership qualities, Eddie praises his brother’s talent as well, he said.
“It’s difficult because he is the older brother,” Eddie said. “We have been playing against each other for so long that you would think I would know how to guard him and all of his moves every time, but it’s just impossible to totally shut him down,” he said. “Going against him for so long has made me a better player because he’s one of the best players I’ve ever played against.”
Feelings are mutual between the Mantz brothers, as Robert said that his brother is “definitely the best point guard” he has ever played with.
“He knows how to share the ball, and he knows how to control the game,” he said. “He also knows my tendencies and where and when I want the ball. We just know each other so well, and he knows how to keep me in check.”
Robert is confident that his brother will be “one of the best, if not the best, players in the league next year.”
“[Robert] was such an important player on the team, and it’s going to be hard to fill that role,” Eddie said.
“Especially with me being hurt my junior year, it made it all the more special to finish off my Horace Mann career with him as my teammate and my back-court member,” Robert said. “He’s my best friend. I cherished every moment, especially knowing that this would never happen again.”