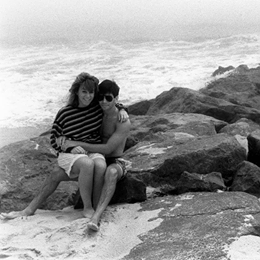 A history course might be the last place one would expect to find their future spouse, but for Lauren Roberts ‘86 and Jon Roberts ‘85, former teacher Pasquale DeVito’s religion class sparked a relationship spanning nearly 35 years and counting.
“It was a really, really fun class that we took,” Lauren said. “We used to talk like we would see him years later and joke about it.”
When they met, Lauren was a junior and Jon was a senior, but the couple dated long-distance post-high school, and they both attended each others’ respective senior proms at Horace Mann, Jon said. As time went on, he said, it became clear to him that Lauren was “the one.”
“I thought I was gonna marry him when I met him in high school,” Lauren said. “I don’t know what my friends thought, but I definitely thought so. I think he thought so too.”
During Lauren’s time at Columbia University, she occasionally visited Jon at Union College on weekends, though he came home to New York City much more often, she said.
For Jon, being in a long-distance relationship was relatively uncomplicated since the couple didn’t have to deal with the “day-to-day” problems, he said. “Absence makes the heart grow fonder, and I think that definitely applies.”
The Roberts’ immediate families had always been always friendly towards one another, and Jon often accompanied Lauren’s family on vacation, which also helped their relationship work out, Lauren said. “We spent tons of time in each other’s houses.”
After college, both of the Roberts attended Fordham University School of Law, during which they took a one-year break, Jon said. “[It] was actually helpful because it made us realize that we were right for each other.”
“We are totally different people now than we were then. So I think we’re lucky that we still like each other,” Lauren said.
Soon after the Roberts graduated from law school, they started dating again and decided to stay in New York City permanently to work as lawyers. Both the Roberts and their families had spent nearly their entire lives in New York, so it was a very natural choice for them, Lauren Roberts said. The couple married in 1994 and later had two children, Molly Roberts ‘16 and Jackson Roberts ‘19.
Sending their kids to Horace Mann was also a logical choice for the couple, who both had a “great experience” at the school, Lauren said. “Our kids loved it too.”